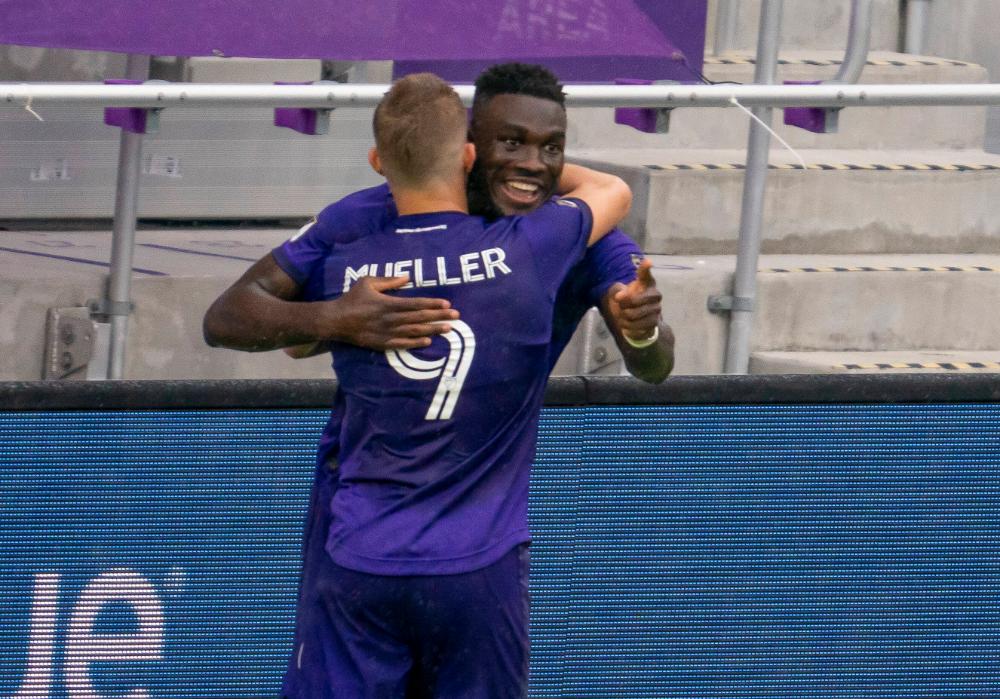 Despite enduring a wretched 2020 so far, Stephen Glass’ side actually made the better start at Exploria Stadium, asking plenty of questions of Orlando’s defence and generating a few half-chances.

However, as we’ve seen time and again throughout the course of this season, Atlanta’s confidence is fragile and their attack blunt. Against the run of play, Daryl Dike opened the scoring on the half-hour mark with an impressive turn and finish, taking advantage of some confusion between Atlanta centre-backs Fernando Meza and Anton Walkes.

The Lions’ lead was doubled in first-half stoppage time when Chris Mueller dispatched a beautiful free-kick over the wall and inside Brad Guzan’s post, although the former Aston Villa goalkeeper did himself no favours, positioning himself in an area where he was blind-sighted by the very wall he set.

He’s reaching to try and see past a wall he set. Horrible goalkeeping 😬#ATLUTD #UniteAndConquer pic.twitter.com/we8nfe15eX

Dike turned provider after the break, bullying Laurence Wyke and charging to the byline before cutting the ball back for Tesho Akindele to fire home for 3-0.

The Five Stripes were able to score a late consolation as Erick ‘Cubo’ Torres headed home his first goal for the club but even that was cancelled out as a Jhegson Mendez free-kick took a horrific double-deflection to take it beyond the helpless Guzan in second-half stoppage time.

One of the best things about Orlando’s rise this season has been the emergence of Dike, who was picked up in the SuperDraft back in January.

Since then, the 20-year-old has gone on to register six goals and two assists in 15 appearances and, moreover, become an incredible focal point for Oscar Pareja’s attack.

Dike was a colossal presence up-front for Orlando on Wednesday night, not only bagging a goal and assist, but bullying pretty much every member of the Atlanta defence into submission with his unique blend of brute strength and slick skill.

Take your pick! Who is your @Heineken_US Star of the Match? #ORLvATL

Across the 78 minutes he was on the pitch, Dike contested five aerial duels and although he was only credited with a win in one of them, he did more than enough in each to cause confusion and disorganisation in the Atlanta defensive ranks, leaving his mark on the likes of Wyke, Meza and Walkes.

The former Virginia Cavaliers striker also completed two dribbles and 92% of his passes, and fired off two shots on goal, never giving the Five Stripes a moment’s rest.

You’ll struggle to find a single defender in MLS looking forward to facing Dike in the playoffs.

2. Atlanta’s Season All But Done

This latest, damaging, humiliating defeat has ended Atlanta United’s season in all but name. Even then, you’d do well to find a fan holding onto hope of making the playoffs. In fact, you’d be hard-pressed to find one who actually wants the team to get there at all, given how much they’ve suffered in 2020.

The Five Stripes are now four points adrift of that 10th and final post-season qualification spot in the Eastern Conference with two games to go. Sure, their next fixture is against FC Cincinnati — one of just two teams below them in the whole of Major League Soccer right now — but even a win there, and then another in a challenging Decision Day clash with Columbus Crew, might not be enough, with Glass’ men reliant on slip-ups from at least three of DC United, Chicago Fire, Montreal Impact and Inter Miami.

Atlanta started well on Wednesday night and a 2-0 deficit at half-time was arguably a very harsh reflection of their first-half efforts. Even so, the way their heads dropped once Dike opened the scoring was emblematic of how this season has gone, with frantic disorganisation taking over and players merely going through the motions right across the pitch.

Make no mistake, Atlanta United supporters will be hurting after this horrific showing against their rivals. But many of them will simply be cherishing the thought of this season finally ending.

3. Moreno Offers Hope For The Future

Despite being pummelled by their fiercest rivals, it wasn’t quite all doom and gloom for Atlanta United fans on Wednesday night. They were, at least, served up another 90 minutes from their newest Designated Player, Marcelino Moreno and, for large parts, he once again showed exactly why the Five Stripes have given him that DP status.

This is Marcelino Moreno’s third competitive match since March; he’s been Atlanta United’s most active/dangerous player tonight. Looks slightly affected by the Orlando heat though.

The Argentine midfielder was the most threatening player on the pitch during the opening half-hour, constantly driving the Five Stripes forward in transition and running straight at the heart of a backpedalling Orlando defence.

Moreno completed more dribbles (3) than any other player on the pitch on the night and created a match-high three chances, one of which resulted in Torres’ consolation goal with the Mexican heading home a brilliantly delivered corner.

Sure, Moreno slowed down as the game wore on, but the 26-year-old is still incredibly short of match practice. Besides, even when he did get into good positions, he was often left alone thanks to a lack of movement and quality in the final third for Atlanta.

One of the few glimmers of hope for Five Stripes fans right now is the thought of Josef Martinez returning to fitness and linking up with the direct, exciting, dare we say “Almiron-esque” Moreno next season.