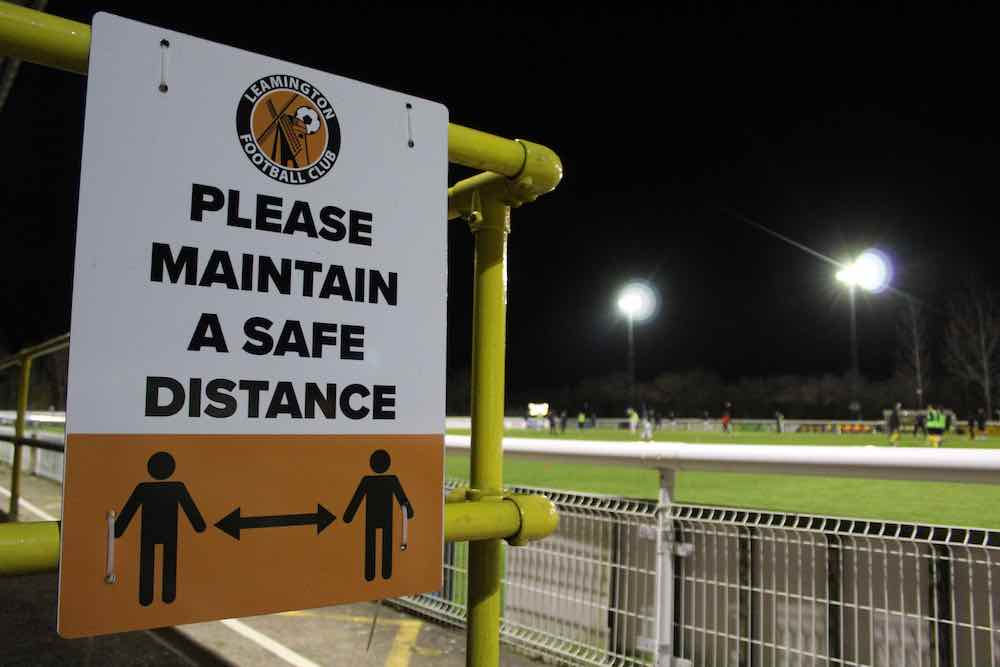 On 23 November, the UK Government announced that spectators would be allowed to attend elite sports fixtures in England for the first time since March.

The decision paves the way for clubs to open their doors to fans this week, with Arsenal’s Europa League fixture against SK Rapid Wien set to become the first professional match to feature supporters in eight months.

A day after the Prime Minister’s announcement, WFi hopped on the CrossCountry line towards Bournemouth, arranging our Tweetdeck as the train stormed across the Warwickshire countryside. 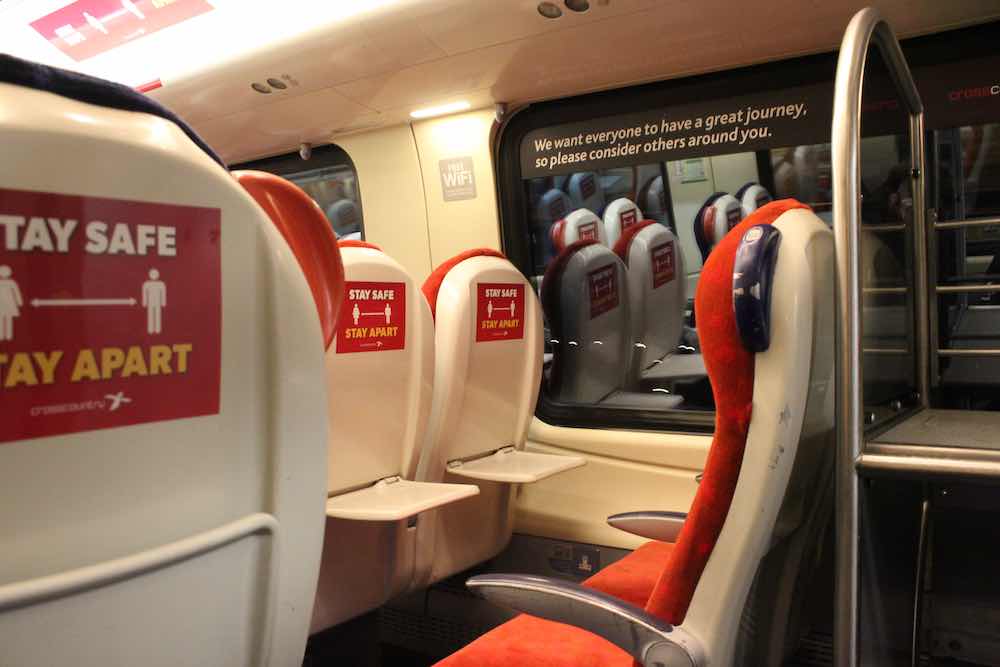 With our destination in sight, we re-fastened our Toronto Maple Leafs beanie, applied an additional layer of hand gel, and made our way to the exit. With fingerless gloves in-hand, we stepped off the train into Royal Leamington Spa — a town home to an eclectic mix of students, Guardian readers, and non-League football fans.

Following a brief, and unconventional, pitstop at a local off-licence with our Uber driver – we made our way to Leamington FC’s Community Stadium. On route, the usual topics popped up: Donald Trump, policy-making in Europe, and our motives behind travelling to a rural football stadium in the middle of a national lockdown.

After making our journalistic credentials known, we explained that we were heading to Harbury Lane to cover Leamington’s National League North fixture against promotion-chasers AFC Fylde.

Having parted company with our Uber driver at the Community Stadium, we approached the lone operational turnstile — which, in itself, felt like an apt symbol of pandemic football.

Before we had the opportunity to flash our WFi ID, a steward unholstered a heat sensor and pointed it at our temple. We passed the temperature check with flying colours and were permitted to enter the ground. 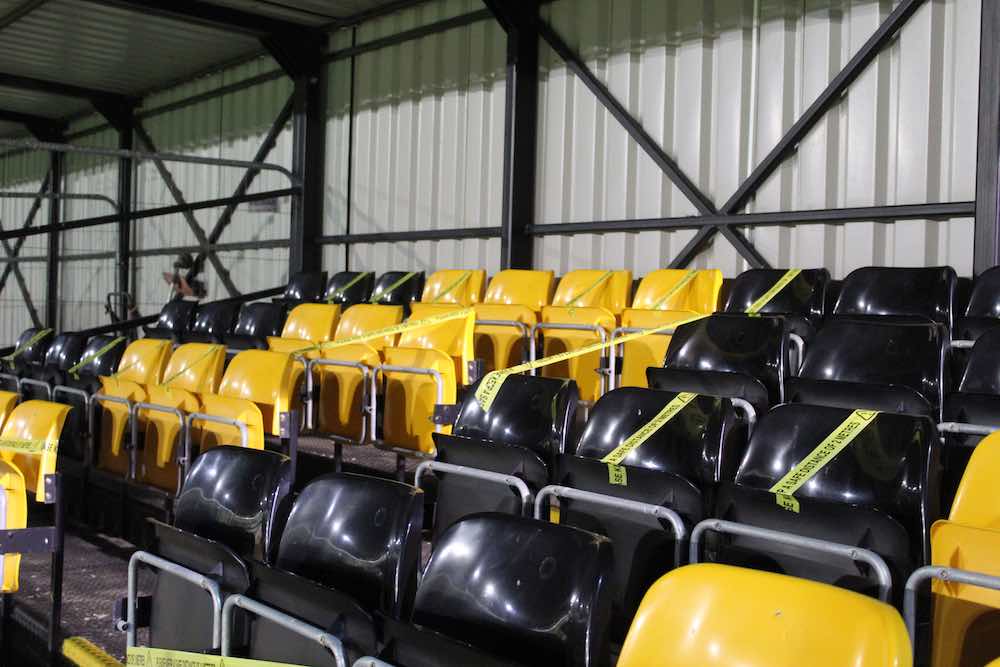 “At Leamington, it’s a real community feel, where all the fans know each other. It’s also been a shame that I haven’t seen anyone, apart from the pre-season matches we had fans in.”

Those friendlies — away against Alvechurch, Bromsgrove Sporting, and Worcester Raiders — now feel like a distant memory to those involved in the day-to-day running of the Brakes. Not only has the prohibition of supporters made his job much more difficult, experiencing football under lockdown has impacted Max’s perspective of the sport.

“It’s hard to enjoy football as much as before with no fans in, I’ve mentioned this millions of times… it’s just not the same.

“Usually on matchdays, it’s just social media duty for me. But this season I’ve been in charge of production on the stream, something I had no idea about — having not touched video editing before. I’ve also been on picture duty at Aston Villa and Curzon Ashton, which is definitely not my forte.”

The coronavirus has had an all-pervasive impact on football, although the ramifications of the pandemic have been particularly severe in the English fifth and sixth tiers. Clubs in the National Leagues are especially reliant on matchday revenues to fund their exploits, a business model that has severe consequences in an age of social distancing and face masks. 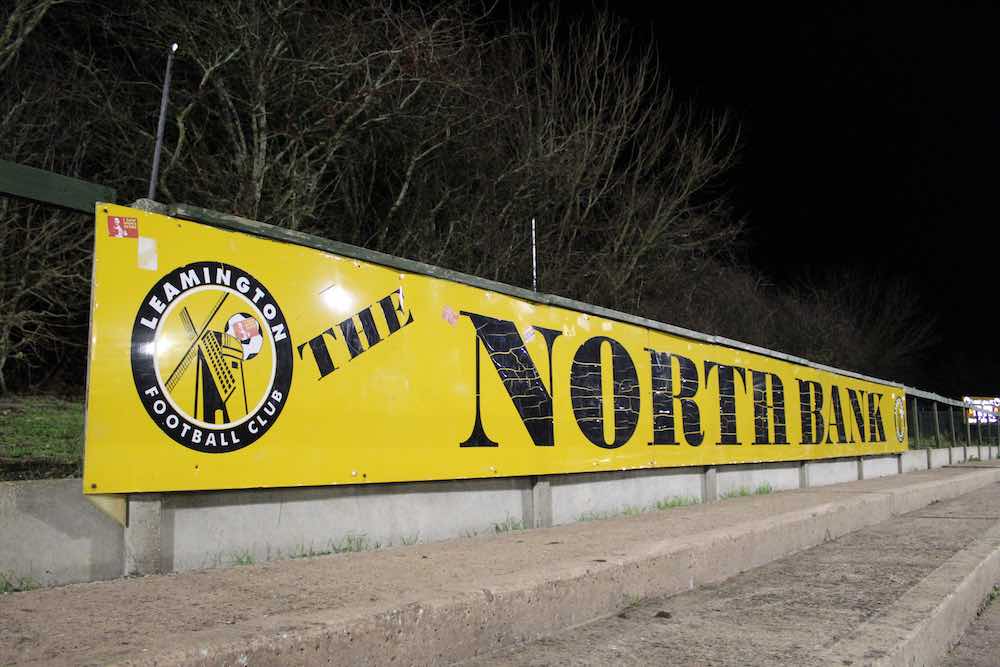 Clubs — including the Brakes — have been forced online, streaming fixtures so supporters can watch the game from home. Non-League outfits have received a blend of funding from Sport England and the National Lottery, but nothing can act as a like-for-like substitute with having supporters in the ground.

The stands, sparsely populated by socially-distanced journalists, scouts, and club officials, felt like a relic of a bygone era – albeit one that will someday roar back into fashion. As the teams emerged onto the pitch, with the pre-match playlist still roaring into the quiet of the night, an eery tension descended over the Community Stadium.

Paul Holleran’s side had won their two previous fixtures – with Leamington’s first win of the campaign coming seven days earlier in a four-goal turnaround against Alfreton Town. The visitors, who were denied promotion to the Football League by Salford eighteen months ago, started the game brightly, forcing Leamington goalie Jake Weaver into action within five minutes of kick-off.

It took until the first minute of the second period for Fylde to break the deadlock, with midfielder Danny Philliskirk arriving unmarked at the far post to fire the travelling side into the lead. An awkward mix of celebration and silence enveloped the Community Stadium.

Despite performing to a scarecrow audience, the match was played at a high tempo. That intensity, however, boiled over on the hour mark when Callum Grittings was sent off for a reckless challenge in central midfield.

Reaction to Grittings’ dismissal was mixed, although a few brave Leamington officials broke rank to admit the red card was probably justified. In ordinary times, the on-pitch remonstrations following the challenge would have sparked an impassioned response from home supporters. Again, the relative quiet told the story.

“It will be good to have fans back, so they can cheer the team on when needed,” photographer Scott Hanna admitted. “When it comes to non-League, I have missed chatting to the fans before the match. I have also missed people’s reactions to game-winning goals and the excitement around the ground.”

Back on the pitch, Fylde had started to make their numerical advantage show, with Coasters forward Jordan Hulme spurning a handful of chances to give his side a two-goal cushion.

With ten minutes remaining, Holleran made the controversial decision to thrust defensive substitute Junior English into the forward line. He made an immediate impact, winning an aerial duel with his first touch of the ball, driving the Brakes up the pitch in the process.

Nick Chadwick’s side – who had controlled the majority of the play – started to feel the heat, conceding a free-kick in what can only be described as James Ward-Prowse Territory. Fortunately for Fylde, the hosts wasted their set-piece opportunity.

In the second minute of injury time, Leamington launched another last-gasp attack, lofting the ball towards English – who flicked into it in the direction of an onrushing teammate. As the Fylde defence scrambled to cover vacant space in the box, the ball floated over the goalmouth to the opposite flank. Again, it was fired into the mixer.

With the ball cannoning around the penalty area, in-form winger Sam Osbourne stole a yard of space and used it to smash a thunderous strike beyond the reach of Chris Neal. The home side celebrated rapturously. Their opponents, meanwhile, fell to the ground, downtrodden and demoralised. The stands, by comparison, were muted. 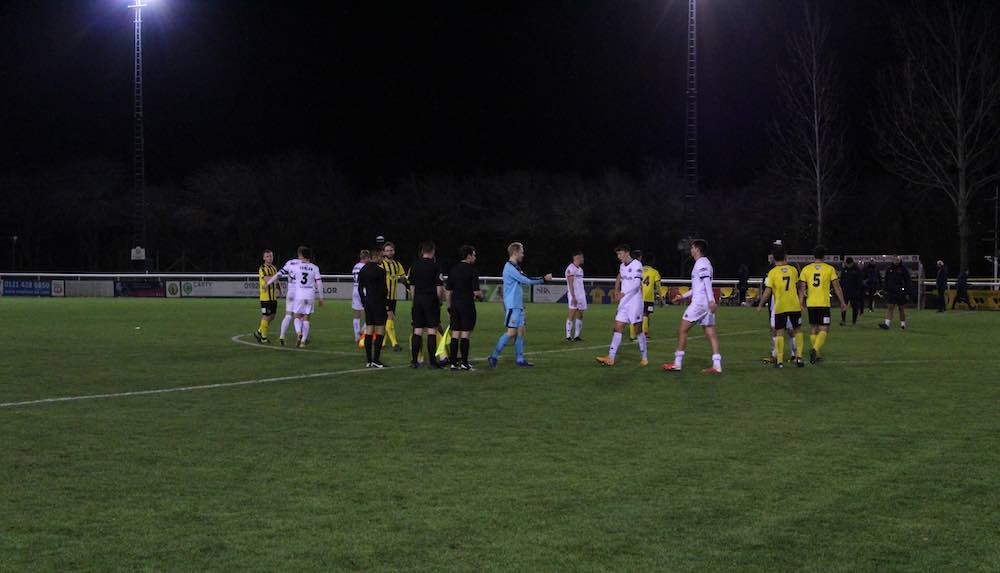 For the second time in a week, Leamington had completed an unlikely fightback on home soil — both against teams nestled in the top half of the table. As the Brakes retook their positions for the final kick-off of the match, latent celebrations quickly died down and the new normal came back into focus.

WFi had the privilege of attending a competitive fixture at the Community Stadium, something Leamington fans haven’t been able to do since March. Clubs across non-League have made the best of a terrible situation during the pandemic, using social media and match-day streams to reach out to supporters, both old and new.

Uncertain times await. Following the completion of the national lockdown, regions will be placed into a tiered system. Teams placed in tiers one and two will be allowed to welcome fans, teams placed in tier three will not.

Much to the disappointment of the club’s local MPs, Leamington has been placed in the highest level of the government’s new coronavirus restrictions. As a result, the Community Stadium will remain supportless for the foreseeable future.

As we made our way to the exit gate, we asked a final question: “How do you feel about the prospect of fans returning in the future?”

“Ecstatic,” Max told WFi. “It’s going to make so much of a difference and the fans deserve it. I can imagine it’s been so hard watching the team on the stream. I had to watch the Farsley game on their stream and it’s just so different to being there… Fans, having done that for months, deserve to be able to finally watch their team again.”

The resilience displayed by Leamington in their comeback draw is a reflection of our times. Football has been rocked by the coronavirus, but the sport will come roaring back. Be patient, football will come home.