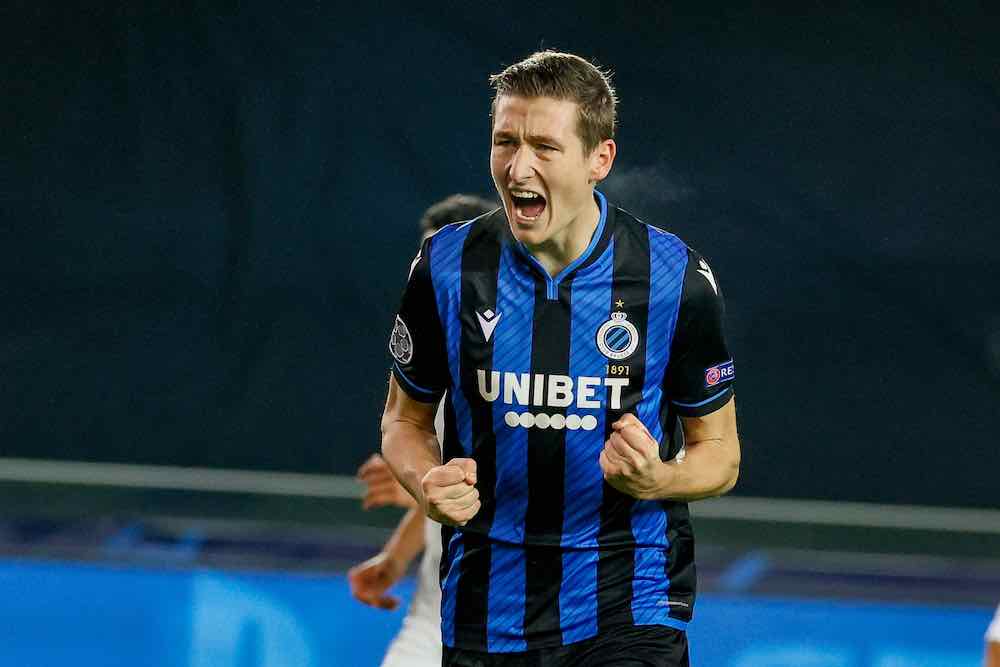 When a talent develops in the Belgium league, the clock is already ticking down to the moment he leaves.

Hans Vanaken is a rare example of quality who has stayed and flourished at Club Brugge. The twice Belgian player of the year is now established in the Belgian national squad and has been a key figure in his club’s recent dominance of the Belgian game.

Tall, technical and thin, he is a totemic presence in Club Brugge’s midfield, playing as either a No.8 or a 10.

Whilst not blessed with pace, his vision, intelligence and wand of a left foot give the illusion that he has more time than everyone around him.

In 220 Pro League matches, Vanaken has registered a remarkable 63 goals and 54 assists. His habit of gracefully arriving in the box at the perfect time has become one of the most common sights in the league.

His signature moment came last year at the home of one of Club Brugge’s biggest rivals, Anderlecht. The showdown is known locally as the ‘Hate Game’.

A blocked free-kick rebounded from the wall high in the air towards Vanaken in the middle of the opposition half. He followed the flight of the ball with Zidane-like concentration and used it’s momentum to smash a looping volley that clipped the inside of the post. Anderlecht’s Vincent Kompany was helplessly rooted to the spot, almost stumbling to the ground in disbelief.

In a big game against a domestic rival, this was the trademark of a player who can make the impossible look easy.

Now reaching his peak at 28, all logic suggests it is time for Vanaken to test himself on a greater stage. Yet, when West Ham offered him a route to the Premier League last year, he turned them down and opted to sign a five-year deal to stay in Belgium.

He reasoned that guaranteed first-team football at Brugge was the best for his career, allowing him to challenge for trophies and play in the Champions League.

Vanaken is a quietly spoken family man, settled in his native Flanders. His choice of stability is understandable, but it is tempting to see how he would fare at a higher level. He is more than capable of succeeding.

The fact that Club Brugge are able to keep players such as Vanaken has cemented their position as the best team in Belgium. Dutch international Ruud Vormer, Vanaken’s longtime midfield partner and captain, has also been convinced to stay in the Venice of the North. The further additions of goalkeeper Simon Mignolet and striker Bas Dost provide a wealth of experience and ability that no other club can compete with.

Last season, Club Brugge lost only a single game on the way to the title. This season they are already 12 points clear.

With regular Champions League football and a planned new 40,000 capacity stadium, they threaten to pull away from all their rivals.

The experienced core of the team is complemented with youth in wide areas. Vanaken is the perfect mentor to 19-year-old Charles De Ketelaere, a similarly tall attacking midfielder who many consider to be the most exciting young talent in the country. Ajax loanee Noa Lang is another to look out for, providing pace and invention from the right-wing.

In the Champions League, Brugge were outclassed by Borussia Dortmund but competed well with both Lazio and Zenit. Vanaken looked increasingly comfortable at that level, scoring three times in the group stage. Their upcoming Europa League tie against Dinamo Kyiv is winnable and a good run in the tournament would help justify Vanaken’s decision to remain in his homeland.

With Vanaken’s future at club level seemingly tied to his native country, this summer’s Euro 2020 is a chance to make his mark on the international stage. He was a regular squad player during the qualifiers but is yet to fully impress for the national team.

Following the international retirement of Marouane Fellaini and Axel Witzel almost certainly ruled out through injury, there are spots in the Belgian midfield up for grabs.

Manager Roberto Martinez has shown a willingness to select Belgian-based players, but competition is fierce. Vanaken will need a strong second half of the season to ensure he makes the cut.

If selected, Belgium are likely to go deep in the tournament and give opportunities to squad players. The stage may be set for Vanaken to finally shine to a wider audience.

Loading...
Newer Post
End Of An Atalanta Era: What Legacy Will Papu Gomez Leave In Bergamo?
Older Post
Tomas Soucek’s Performances Have West Ham Looking Up Rather Than Down