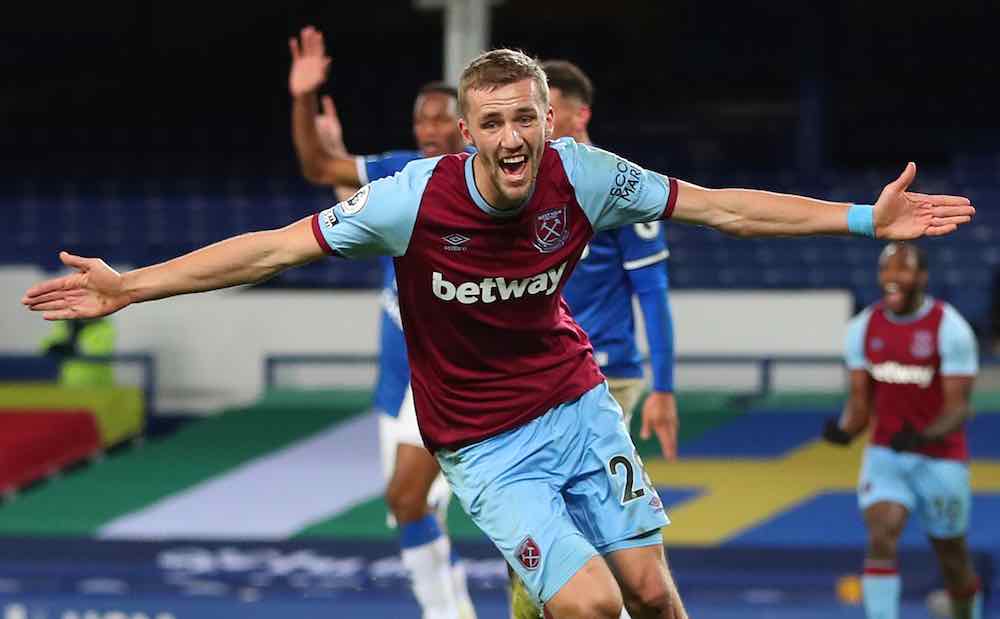 When Tomas Soucek moved from Slavia Prague to West Ham for €16m, it was said that David Moyes had found his new Marouane Fellaini — the Belgian midfielder who had served him so well at Everton. But Soucek was so much more than this for the Hammers.

At the time of writing, West Ham find themselves fourth in the Premier League off the back of a 3-2 win against Crystal Palace. They have played more games than most of those around them, but the same amount as Arsenal who are five points behind them.

Soucek, who won Czech Player of the Year in 2019, has formed a solid midfield double-pivot with Declan Rice. The 25-year-old, along with Vladimir Coufal, has revitalised West Ham.

Soucek was born in Havlíčkův Brod in the Czech Republic on the 27th of February 1995, a few years after its formation. As a 19-year old, he was signed to Slavia Prague’s B team, where he had a loan stint at one of Czechia’s oldest clubs, Viktoria Zizkov in the 2014-15 season.

He had another loan season in the 2016-17 season with Slovan Liberec, another first division team in the Czech Republic.

In the 2019-20 season, Slavia Prague were drawn in a tough Champions League group featuring Barcelona, Borussia Dortmund and Inter Milan.

In their first game, against Inter, Soucek and co. fought valiantly to secure an impressive 1-1 draw at San Siro. Soucek, the team’s captain, was arguably the best player for them in that game.

Soucek scored goals in the final two fixtures of the group — one a penalty against Inter Milan and another against Dortmund after getting onto the end of a cross from Milan Skoda.

He shone throughout his career in the Czech Republic, and that attracted the attention of West Ham, whom he initially joined in a loan in the January 2020 transfer window, but was soon signed to a permanent deal.

Soucek’s three goals and general performances for West Ham as the end of the 2019-20 season helped them steer clear of relegation, but this new campaign has been more about looking up than down.

“He’s a terrific lad with very good physical capabilities,” Moyes said after the deal was made permanent.

“He has scored some really important goals for us, against Chelsea, Newcastle and Watford. We’re glad he’s going to be a West Ham player for a good period to come.”

Soucek’s two goals against Palace take him to seven for the season, which makes him West Ham’s top goalscorer ahead of striker Michail Antonio and Jarrod Bowen who have both found the net five times.

Before last night’s brace which were the first goals scored in the game, Soucek’s goals have been vital in West Ham’s collection of points which has seen them rise so far up the table. His five goals before last night, four came in moments where West Ham were drawing or losing, to secure wins or draws.

His header against Brighton secured a 2-2 draw, with Moyes commenting after the game: “You’d certainly pick Tomas Soucek in the big games because his ability to score from midfield.

“If I had a criticism it would be that I need to find a way to get him in the box more. Even tonight he had another chance to make it 3-2 at the back post. On a night where I don’t think we or Tomas played so well, he still came up with a goal.”

Defensively, Soucek has shown to be a rock.

Seeing as though he didn’t win POTM, here’s some respect for Tomas Soucek. 🇨🇿

He attempts the most aerial duels in the Premier League and has one of the highest success rates in this area of the game.

Ever since Soucek joined the Hammers, he has been a vital cog in the machine, freeing Declan Rice and balancing West Ham’s midfield.

He covers an incredible distance in games and has shown to be a real difference-maker for West Ham, and could propel the London side to a top-half finish.

Rather than simply looking to stay in the division, West Ham and Moyes are now looking to Soucek to possibly secure European qualification or at least finish in the top half of the table.