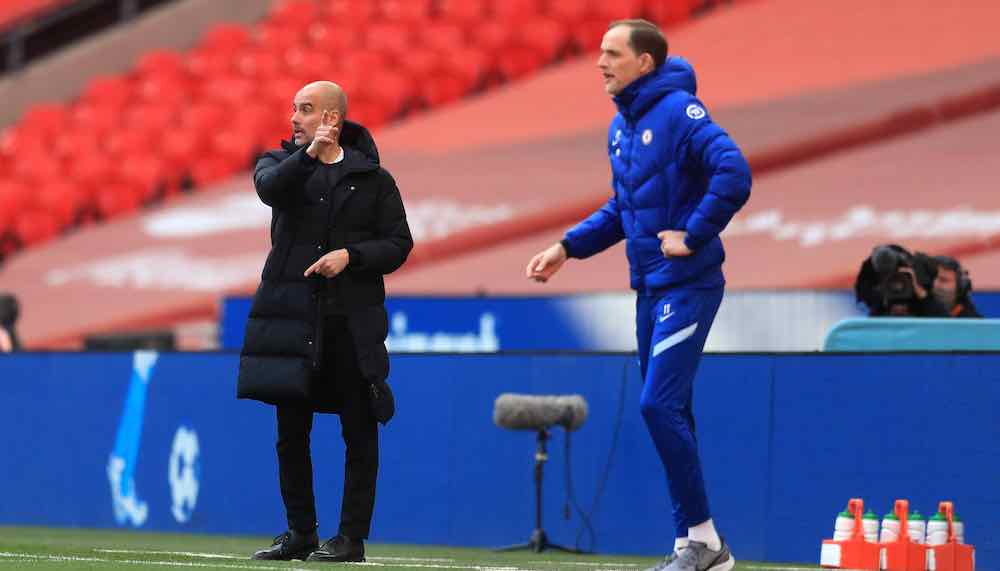 It’s time once again for the biggest game in the European football calendar.

These sides facing each other in big clashes this season is nothing new. Tuchel was brought in to replace Frank Lampard with the aim of securing Champions League football for next season which, to his credit, he has achieved.

Since his arrival, he has faced Manchester City twice, once in the league and once at Wembley in the FA Cup semi-final. Chelsea claimed victory both times.

Despite these defeats, Guardiola has masterminded his third Premier League title with Manchester City. Doing so, he once again showcased his fantastic ability to dig into his squad, find solutions to personnel and tactical issues and problem solve accordingly, as he has shown himself to be one of the best at doing.

Whilst having considerably contrasting domestic campaigns, both teams have enjoyed unforgettable European runs.

The Roads to the Final

Both of these sides did very well in their respective group stages, both going unbeaten. City won their opening five games against Porto, Marseille and Olympiakos, only drawing the final game against Porto when qualification was already secured.

Likewise, Chelsea cruised through under Lampard, winning four games and drawing twice in a group that consisted of Krasnodar, Sevilla and Rennes.

Similarly, City produced a shut-out against Borrusia Mönchengladbach, dispatching the German side in a straight-forward 4-0 aggregate win.

The Premier League champions found it harder against Borrusia Dortmund. Despite winning both legs 2-1, Dortmund provided a sterner test for Guardiola in a game that the headlines seemed destined for Erling Haaland but instead they fell to another youngster, Phil Foden, who scored both home and away.

Chelsea once again breezed past their opposition, Porto provided the steel and resilience we can expect from them, however, Tuchel’s team prevailed after a controlled display.

The last stop before Portugal saw Guardiola face an old foe who has experience knocking him out of this competition, Mauricio Pochettino. This time PSG were the cast members as opposed to Tottenham Hotspur but even the might of Neymar and Kylian Mbappe wasn’t enough to beat Guardiola this time.

Even after a shaky opening 45 minutes in the Parc de Princes, City prevailed after goals from Kevin De Bruyne and Riyad Mahrez, the latter would go to score another brace at the Etihad as City progressed to the final with a scoreline of 4-1.

In a similar vein, Chelsea were given the biggest run for their money yet as Real Madrid stood in their way. However, the competitions’ most successful club were no match to Chelsea, who once again displayed their ability to control the game and outwork their opposition.

N’Golo Kante was particularly impressive as Chelsea handily dealt with Zidane’s side in a 3-1 aggregate win.

What to Expect in the Final

The betting odds slightly favour Manchester City, and Guardiola is expected to enter this final more prepared than ever. On the other hand, neither of these sides have failed to score in any of their knockout games therefore both teams to score may be a wise call.

Guardiola has signalled his intent to win the competition, saying his time at Manchester City “would be a failure” without a Champions League winners medal.

Of course, his counterpart, Tuchel, has motivations of his own. He fell at the final hurdle last season with PSG in the Champions League, where they lost 1-0 to Bayern.

In addition to this, Tuchel has already shown in his short time in England that his ability to triumph against top managers is very much applicable with this Chelsea team. The German has already beaten Klopp, Guardiola, Mourinho, Simeone and Zidane in the six months he has been in charge.

While it goes without saying that both sides have game-changers in their teams, who can turn the game on its head, both also have managers with their own personal motivations.

The make or break feeling that has a danger of surrounding Manchester City, and particularly Guardiola has the potential to provide further motivation or a heavier burden.

Whereas Tuchel is just getting started at Chelsea, is still working to turn the Blues into title challengers once again and attempting to prove the doubters wrong about his capability at clearing the final hurdle.

A Champions League win would surely wave those notions away for the time being.