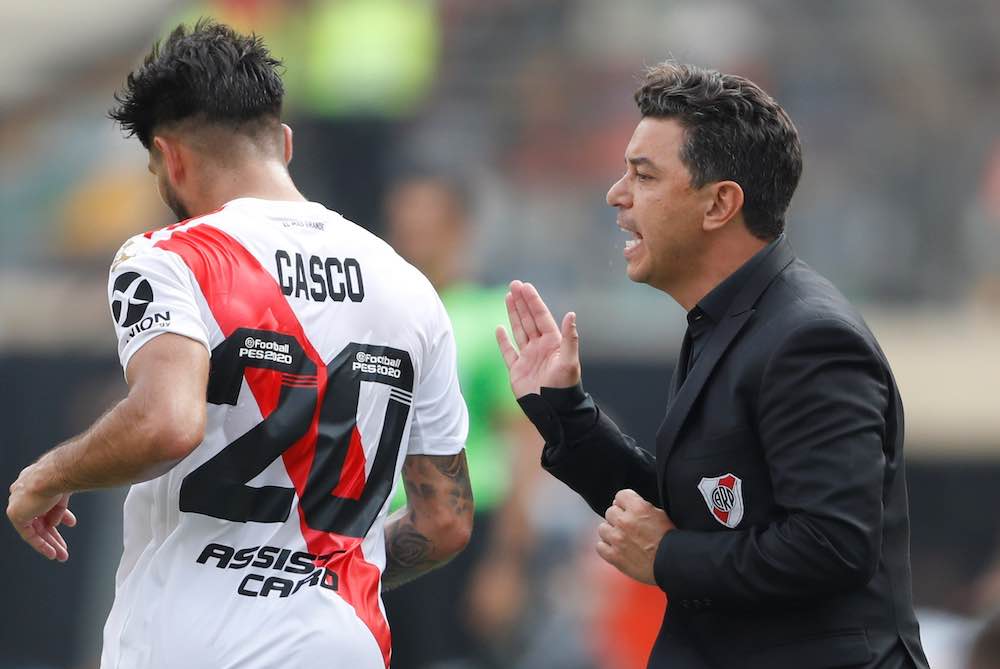 The Copa Libertadores is no stranger to unpredictable or bizarre nights, but what will take place on Wednesday night in Buenos Aires is astonishing even for a tournament that expects the unexpected.

River Plate, one of the favourites to lift the Copa in Montevideo in November, have been hit by an outbreak of Covid-19 which has downed 20 of the 32 players they named in their official squad when the cup started.

With two more on the sidelines uninfected but injured, it seems likely they will field only 10 players for the visit of Independiente de Santa Fe for the fifth match of group D on Wednesday night. There is speculation Javier Pinola or Enzo Perez could be rushed back from injury to complete a patched-up XI.

SUBSCRIBE TO THE WORLD FOOTBALL INDEX PODCAST FOR THE LATEST FROM THE LIBERTADORES!

To add to that, none of the ten men still standing are goalkeepers as all four of those are infected, so an outfield player will be wearing the gloves.

The local press see Milton Casco, a 5ft 5in full-back who has played for Argentina in his natural position, as the likely fall guy, while midfielder Pérez has been spotted wearing the goalkeeper gloves in training.

-First time ever in professional football we’ll line up with 10 men.

-First ever time an outfield player will go in goal https://t.co/cxsNyRt5uv

Why are River Plate in this situation? Is it bad luck, bad planning, or inept management by the Conmebol governing body?

The answer is a bit of all three.

Any squad suffering a big outbreak of coronavirus is clearly unlucky, but Conmebol anticipated this situation by allowing clubs to name a giant 50-man squad which would not be modified until the knockout rounds.

River manager Marcelo Gallardo stated that he would only name 32, given that he only works with and knows 32 players.

“If 32 is not enough, that means the pandemic has made it impossible to play football and there shouldn’t be games,” he said months ago when taking the decision.

River did ask for youth goalkeeper Leandro Diaz, who made an emergency debut in last Sunday’s Superclasico, to be added to the squad but Conmebol refused.

The recriminations continue with Gallardo’s supporters pointing the finger at Conmebol for a lack of flexibility in extreme conditions, and Gallardo’s detractors say he made his own bed.

The game itself is key as it will offer Santa Fe, themselves declaring five Covid cases this week, their last chance to reach the last 16 and give River a chance of sealing an unlikely qualification.

The standings in Group D ahead of the remarkable scenes we will see tonight:#Libertadores pic.twitter.com/dYaiezGlmD

All eyes will be on El Monumental stadium at 9 pm local time (1 am UK time). Anything other than an away win for the Colombians will be a night that goes down in River Plate folklore.

This is the Copa Libertadores, however, so remember to expect the unexpected.