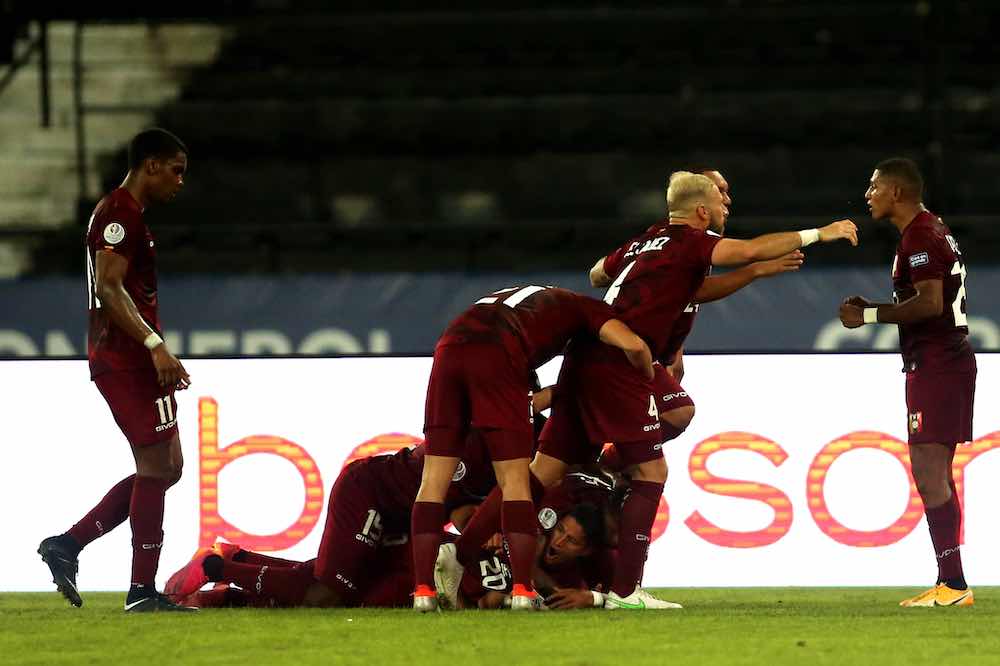 For the third game running, Venezuela took to the pitch in the Copa América with a severely depleted squad and left it with their heads held high and having inspired a nation.

With 18 absentees – ten to coronavirus and eight to injury – head coach José Peseiro has forged a makeshift outfit founded and fuelled by a determination not to disappoint and an extraordinary amount of effort.

The official soundbite fans have united around came from Peseiro himself prior to the Copa América opener against Brazil – ‘we will give 300%’ – while the rallying cry going viral on Twitter is ‘mano, tengo fe’: brother, I have faith.

The two phrases have come to symbolise all that this hastily assembled team embodies.

Inspired by a line in the Fast & Furious franchise, ‘mano, tengo fe’ was turned into a meme and is the perfect riposte to a tournament many feel shouldn’t have gone ahead in the first place and then seemed as good as over for Venezuela within 24 hours of setting foot on Brazilian soil.

As La Vinotinto have improved with each passing game, the meme, so often a self-deprecating tool among Venezuelan football fans, has taken on a mantra like quality.

On Sunday night, Venezuela took on Ecuador and, with few options at Peseiro’s disposal, just two changes were made from the 0-0 draw with Colombia on Thursday: 27-year-old Edson Castillo made his full debut in place of Bernaldo Manzano and José Manuel Velazquez earned his first start in four years, replacing Francisco La Mantia.

Much like his decision to return Wuilker Faríñez to the fold against Colombia, the two introductions proved the Portuguese head coach has his finger very much on the pulse of his side, despite barely seeing some of them train or play in the flesh and without having a single friendly to trial players or systems in since taking charge at the beginning of 2020.

Velazquez led from the back, organising the five-man defence he was at the heart of and haranguing a referee who had a string of difficult decisions to make and a VAR team slow on support. But it was Edson Castillo who would really shine, later announced as SofaScore’s highest-rated player of the round and with the joint-second highest-rated performance of the tournament so far.

After a quiet first half as part of a midfield four alongside Junior Moreno, Cristian Cásseres Jr. and Brujo Martínez – all defensive midfielders by trade – Castillo came to the fore with a goal and an assist as Venezuela twice came from behind to earn an eventual 2-2 draw with a 91st-minute equaliser.

In the opening 45 minutes, it was the MLS duo of Cásseres and Brujo Martínez, operating out of position as harrying wingers, who most looked likely to make an impact, but six minutes into the second half Castillo thumped an emphatic header past Pedro Ortíz to level after a scrappy Ayrton Preciado goal had given Ecuador the lead at the break.

A moment to remember for Edson Castillo! Called up to the Copa America squad aged 27 and previously uncapped, he scores an emphatic header to equalise against Ecuador on his full debut. Amazing. #Vinotinto #CopaAmerica pic.twitter.com/8DQ7Q5Xcap

When Gonzalo Plata finished off a superb one-man counter-attack with a fortuitous tap-in to restore Ecuador’s advantage in the 71st minute, Peseiro’s late flurry of substitutions seemed too little too late.

All but one of the midfielders were substituted. Edson Castillo was the one who remained.

Into injury time, the Caracas FC player with only seven minutes of international experience to his name before the night, had the ball played back to him five yards into the Ecuador half. He took two touches, adjusted his body shape, and clocked the run of Ronald Hernández.

The right-back, a new signing for Atlanta United after a difficult spell at Aberdeen, had come on at left-back with fifteen minutes to go and was now one of the furthest men forward.

The ball dropped into the box just as Hernández stepped foot in it and he dipped awkwardly to make contact with his head. It landed in the far corner of the net and a nation erupted in celebration.

And what an assist from Edson Castillo, scorer of the first. He was the only midfielder to play the full 90. #CopaAmerica #Vinotinto pic.twitter.com/tbOFUaRvDA

“Mano, tengo fe,” Venezuela defender Luis Mago tweeted after the game. It was direct acknowledgement of the support – and the sentiment and style of it – back home.

Along with “300%” effort, perhaps faith can carry Venezuela into the knockouts.

Jordan Florit is the author of Red Wine & Arepas: How Football is Becoming Venezuela’s Religion and the founder of @FUTVEEnglish.

Loading...
Newer Post
Germany To Face England After A Thrilling Night Of Euros Football
Older Post
Wales Through To Last 16 Despite Losing To Italy In Rome