Peru’s Evolving Squad Look To Move On From Brazil Defeat 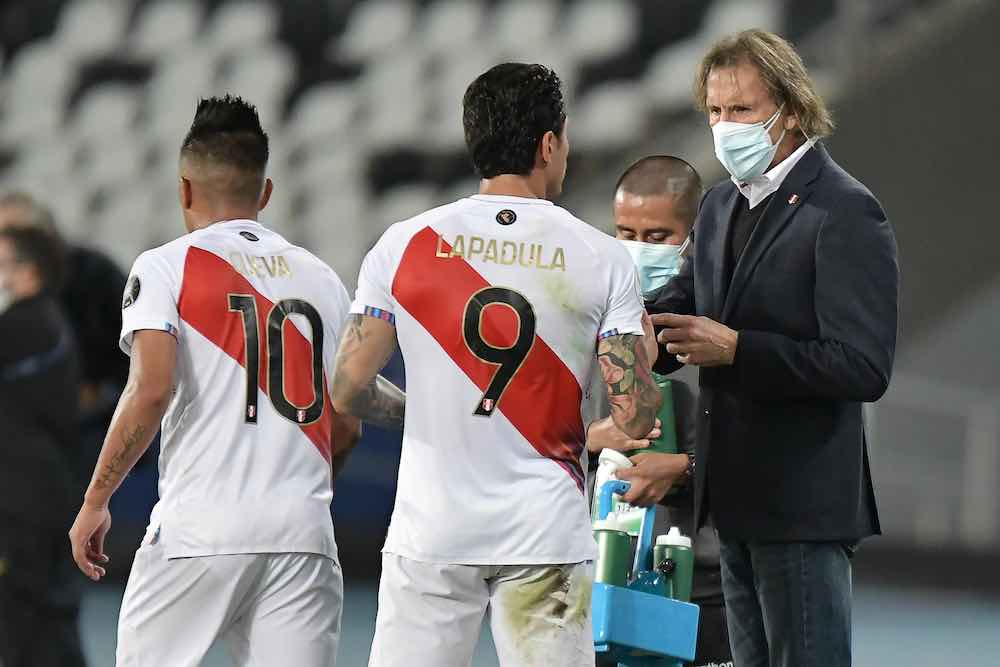 Peru came into the Copa America on the back of an impressive 2-0 victory in Quito over Ecuador in the World Cup Qualifiers.

Ricardo Gareca made just one change to the starting 11 against Brazil, bringing experienced Aldo Corzo in for Luis Advicula who has returned to Spain to play for his club side Rayo Vallecano in their promotion play off.

After just 12 minutes, Brazil were able to get themselves in front, Alex Sandro converted a low, drilled cross from Gabriel Jesus.

Peru had started brightly and as underdogs looked to defend well and try to limit the space for such a talented Brazilian side.

Having recently given such a strong showing in Quito, the players struggled with concentration as Brazil moved them around the pitch with their passing. As predicted, Brazil were the sharper and more entertaining side.

Christian Cueva was a key player once again, despite going into the game with more off the field controversy surrounding him. With pictures of him attending a party emerging in the press, Gareca decided to keep faith with the attacking midfielder who showed his thanks with a solid performance.

Once again, Cueva was a standout player for Peru. Despite the comprehensive defeat, Cueva worked hard off of the ball for his side as well as looked dangerous going forward.

Peru managed to stay in touch with Brazil going into half time and both sides shared 50% possession, though Peru struggled to really break down the Brazilian defensive line.

Andre Carillo and Cueva showed great composure on the ball, the two leading creative sparks in the side, though playing in a 4-1-4-1 formation, little support was available to Gianluca Lapadula up front.

As the game progressed, Brazil looked to capitalise on a slowing Peruvian defence. Neymar showed his class and skill, entertaining those watching on at home, and got his reward with a goal in the second half to kill off any Peruvian hopes.

Two more goals in the dying moments of the game secured a dominant win in a game Brazil always looked like winning, though was more than Peru deserved who battled well throughout.

This game was one Gareca would have accepted a defeat prior to kick-off and his plans will focus on the following fixtures.

What was important for Peru was the emergence of some young players looking to impress. A side with many older players to whom Gareca has stayed loyal are now in a period of transition, and this tournament will provide them with an opportunity.

Luis Iberico of Melgar and Alex Valera of Universitario were the first double substitution after going 2-0 down. Martin Tavara of Sporting Cristal and Alexis Arias followed shortly after and looked to compete with the best in South America to show their ability.

Using a deep, counter-attacking system against Brazil, Gareca will likely change focus going in to the Colombia game and try to be more offensive. Sergio Peña will hope to move up into his proffered number 10 role as he has looked ineffective as part of the central midfield in both of the previous games; while Martin Tavara and Wilder Cartegena will be keen to start in the central midfield area alongside Renato Tapia should Yoshimar Yotun be rested.

Aldo Corzo showed that his best years are well behind him, struggling with the pace of the Brazilian attack. Young right-back Jhilmar Lora has been added to the squad after breaking into the Sporting Cristal side this season and showing composure and quality beyond his years.

To be thrown into a debut against the Brazilians may have been seen as setting him up to fail, though the young full-back will likely take over the starting role going forward.

The big talking point across Peru is whether Gareca will give Santiago Ormeño his debut. The striker, whose grandfather represented Peru, is also eligible for Mexico and has had an impressive season in Liga MX, earning himself a move to Leon from Puebla.

At 6ft 1in he is a different prospect to Lapadula and will act as more of a focal point in the attack, meaning Peru will probably change system to have three attacking midfielders behind him and in front of two holding midfielders.

It is Ormeño who will dominate the talk prior to the match and Peruvians everywhere will be keen to see the talisman up against a Colombian side who struggled to break down Venezuela in their previous game; one which they dominated but couldn’t find a way past Wuilker Fariñez.