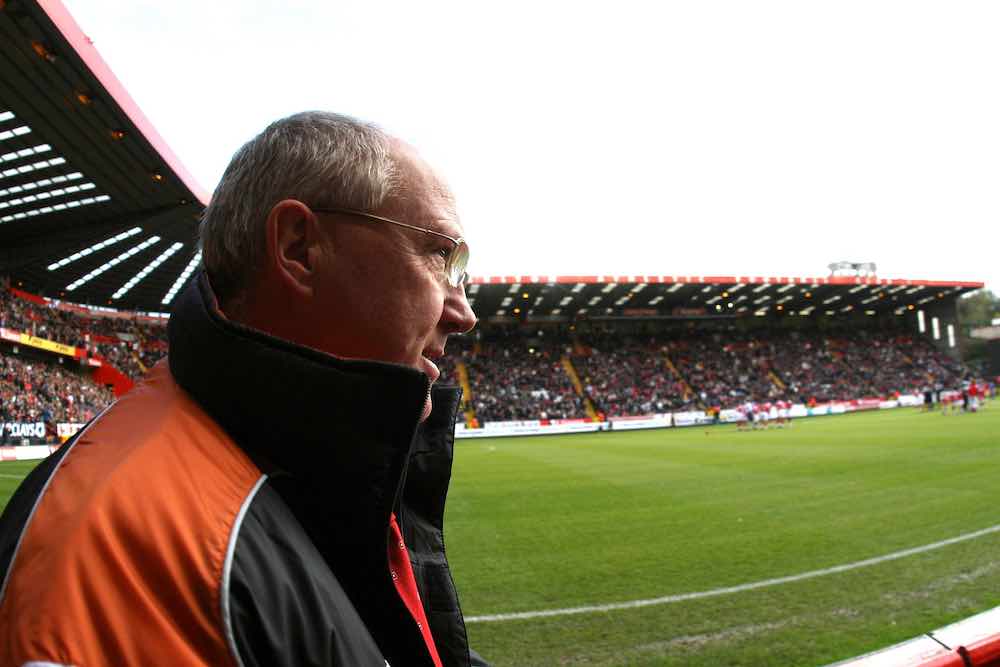 In a wide-ranging interview, Les Reed spoke to Callum McFadden for WFi about a number of topics.

These will be released in a series of articles, with the first looking at Reed’s career in non-league football before he made his move into coaching.

I loved my time in non-league football. The experiences were significant in my formation as a coach and in my subsequent leadership roles.

I was one of the many rejected by the pro game as a very young kid, having been with Arsenal and West Ham for what was then called schoolboy training.

My PE teacher was an FA coach and managed Epping Town Football Club in the old Metropolitan League.

He got me to play for their youth team on Sundays, then the reserves and finally the first team where I actually played with Tony Carr, who became West Ham’s legendary youth coach.

When the teacher left to manage Leyton FC in the Athenian League, he took me with him along with half the young players (as you did in non-league).

When he moved again to coach Stevenage (then called Athletic), I went with him.

There I played alongside Barry Fry, Peter Shreeves and Ricky George. Most of the squad were older, seasoned pros from the full-time game, and this was the Southern League. I remember playing against Dave Bassett who was at Wimbledon.

Halfway through my second season, I was traded in exchange for Vic Akers of Arsenal fame in a move to Bexley United where I played with Alan Hudson’s brother John.

The highlight of my time at Stevenage was an away match at Merthyr Tydfil on Boxing day where I played against both John and Mel Charles — football royalty.

After that, I played at Walthamstow Avenue where I was picked up by Cambridge United who were then in the third division under Bill Leivers.

I played in the reserves, which was basically five players plus the ones that didn’t play well for the first team on Saturday!

They all got plenty of games because we got relegated that year and Big Ron took over and we were all out, basically.

Coming off the pitch I was approached by Barry Fry — my old teammate — who tried to sign me for Dunstable Town where he was just starting his amazing managerial career, but I was going to university and declined. Two weeks later he signed George Best and Jeff Astle. That was non-league football!

At University I was asked by Graham Taylor to play part-time for Watford while completing my course. The problem was that they were in the fourth division.

Despite scoring regularly in the reserves and loving it, by the time I left college they had made it to the first division and with players like Gerry Armstrong (who remains a great friend to this day), Luther Blisset and the emerging John Barnes. I wasn’t really going to get a look in. So, off I went to non-league again with Wycombe Wanderers, who were the cream of non-league at the time.

My first serious injury occurred there and when I got my first teaching job in East London I had to move again.

Two more playing roles at Hertford Town and Woodford Town before transitioning to coaching at Woodford —  initially as player/coach then manager when my mate Bobby Moore, who was president, recommended me to the owner.

Only non-league could see a journeyman like me grace the Snakes Lane pitch at Woodford alongside Joe Kinnear and Jimmy Greaves.

As soon as I got the job the club went bust and they all left me to it. I pulled together a cheap, young, but really good side and we got promoted from the Athenian League to the Southern.

My first triumph as a coach followed next season by my first sacking. I went to Finchley as a player and ended up manager and [went from having] Bobby Moore as a club president to Margaret Thatcher as club president! Only in non-league!

From Finchley, I went back to Leyton only now it was Leyton-Wingate after an amalgamation with the well-known Jewish foundation club. We got to the FA Vase semi-final with me as coach.

I was growing a reputation as a coach working with the FA part-time and was approached by the manager of Wealdstone FC in the Conference Brian Hall, and Conference champions Enfield Town.

I chose Wealdstone and went on to win the FA Trophy and the Conference in the same year, and every other competition we were in except the FA Cup where we were knocked out by Wrexham after a replay.

After that, I was Headhunted by the FA and became a regional coach and the rest is history.

That career in non-league was the best apprenticeship I could have served, and the mentors I have already mentioned plus many others you could not buy.

I learned so much of the good stuff about how to be a coach and all the tricks and dodges to look out for with players and definitely how to manage up.