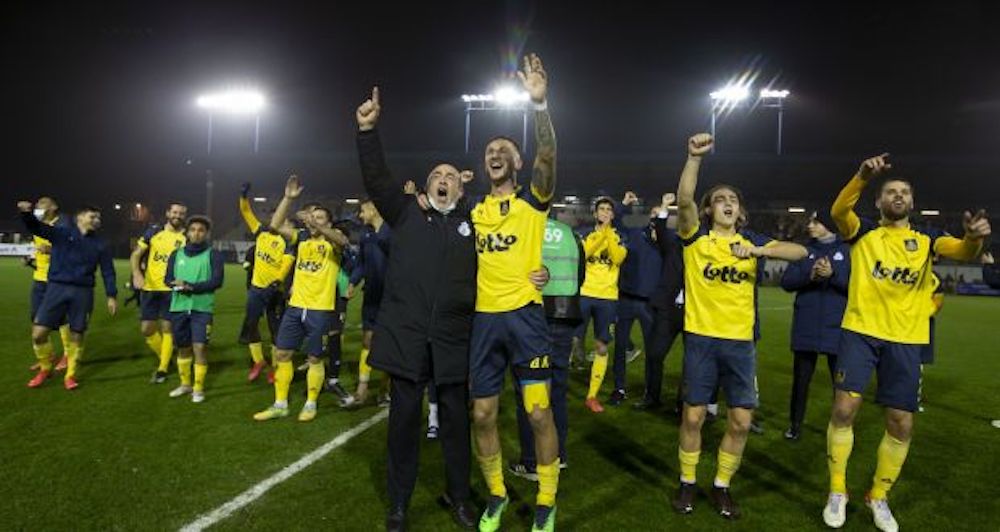 On a drizzling winter evening in Brussels, Union Saint-Gilloise fans packed the street beside the historic main stand for a pre-match drink.

Local Bruxellois, ex-pat Euro-bubble dwellers, students and families: a glimpse of the diversity of the cosmopolitan south of the city.

The numbers and anticipation have been growing steadily in recent years, and this season is reaching a crescendo.

Union were taking on mid-table Cercle Brugge and looking to cement their place at the top of the Pro League. If they were to stay there, it would be one of the most remarkable title victories of any major European league in living memory.

For footballing romantics, Union’s story has everything.

The club is a historic heavyweight of Belgian football. From 1933 to 1935, Union went a record 60 games unbeaten to secure three titles in a row. The run crowned Union’s status as the most successful club in the country before World War II.

However, much changed in Belgian football and society after the war and Union were left behind. Club Brugge, Standard Liege and city neighbours Anderlecht rose to dominate the league and the pre-war powerhouses all have various tragic tales of decline and nostalgia.

The title in 1935 was Union’s eleventh and last. In 1963 the club was relegated from the top division and sank into the depths of provincial football.

The gorgeous Stade Joseph Marien, built in the 1920s complete with its protected art-deco facade, was neglected and parts fell into ruin. Trees took root in the curved stands behind the goals to replace the fans that once cheered their team to victory.

A local cult following kept the club alive, and footballing purists from the ex-pat community took the team to their hearts. As recently as 2016, fan-favourite Ignazio Cocchiere combined his part-time playing career with his job at the European Parliament.

From a team of local part-timers just a few years ago, Union now field a team from across the world. The globalised game is a brave new world compared to the glory days of the early twentieth century.

A visit to the stadium feels like travelling in time to a bygone era, a snapshot of history catapulted into the 21st century. A renovation in 2018 modernised the old stadium whilst maintaining its charm.

The same year Brighton & Hove Albion owner Tony Bloom bought a controlling stake in the club, bringing in knowledge and resources from a Premier League powerhouse.

Since the start of last season, Union have barely left the top of the league. They blitzed their way through the second division for the loss of just two games.

The vast majority of the squad were kept together and any doubts about their ability to compete in the top tier were immediately dispelled with a 3-1 victory over Anderlecht on the opening day of the season.

A 4-0 win over Standard quickly followed later in August and the team hasn’t looked back since, with a 7-1 over Oostende amongst the run of impressive results.

The pairing of powerful German forward Denis Undav with the lightning-quick Dante Vanzeir, who recently won his first Belgian cap, has terrorised defences across the country.

The great team of the thirties finally has a modern-day successor nearly 90 years later.

However, the first half against Cercle didn’t start according to plan. The visitors took the lead from a corner inside ten minutes and went two ahead from a quick counter-attack finished off by Welshman Rabbi Matondo, on loan from Schalke 04.

Union’s domination of possession was blunted against a resilient defence. Vanzeir’s effort was well saved after a run behind the defence and Undav’s shot smashed the crossbar. This was the type of match that tests a nascent title bid.

One can only imagine what manager Felice Mazzù said at half-time. Charismatic and driven, his gravel-voiced presence owns a room, or a stadium if need be.

With renewed purpose in the second half, the rousing support sensed a swing in momentum. Kaoru Mitoma, on loan from Brighton, smashed home off the underside of the bar.

The Japanese winger, deployed as a left wing-back, was starting to show his quality and excellent work on the left fed the ball into the Cercle box before a goalmouth scramble led to the equaliser.

In the 90th minute, Union’s pressure paid off against a tiring defence as a rushed back pass wrongfooted Cercle’s keeper to finish off a 3-2 comeback.

Perseverance, belief and a bit of luck: the qualities of a title contender were on full display.

At full-time the players rushed to celebrate with the fans on the terraced north stand.

Hardly a soul left as Mazzu joined the singing and dancing. The party continued until closing time in the bars beside the famous stand.

Perhaps they never doubted their team at 0-2 down, Union have been coming back from behind their entire recent history, after all.