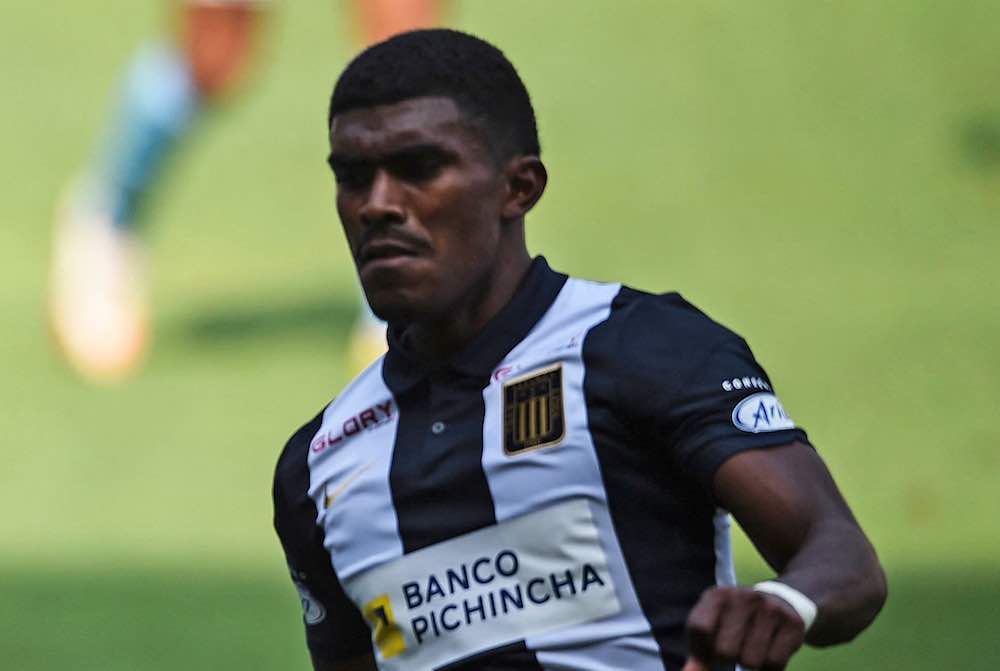 The Lima-based sides Alianza Lima, Sporting Cristal and Universitario are the dominant clubs in Peru. Players will flock to Lima at a young age looking to find the opportunity in the stronger academies to aid their development.

With the vast distances between some of the biggest cities, from Lima to Cusco to Arequipa and Trujillo, it can be difficult for those with little funds to keep competing and developing young players.

Lima provides more competition and, with more investment available, an opportunity for young players with potential to develop further.

The bigger clubs in the provinces are looking to develop young players more and are competing well in recent years.

Cesar Vallejo in Trujillo are in the qualifying rounds of the Copa Libertadores for a second season running, while Melgar of Arequipa have been a bright spark for Peruvian football with their performances in the Sudamericana.

More investment is going into sides around the country and with La Bolsa — a minutes requirement for young players in Liga 1 — there is the chance to continue to work their way into the first team and build their reputations.

Not only did those on the list below impress, but they also showed their ability for regular first-team football as well as having the potential for moves to bigger leagues and national team call ups.

2021’s Young Player of the Year is currently touring Europe and been spotted taking in matches at Anderlecht in particular.

He currently remains a Sporting Cristal player but his performances have ensured sides from around the world have been taking notice.

A tall and strong forward, he started out in the academy as a wide player, mostly operating from the right-hand side.

But since the departure of Emmanuel Herrera last season and his replacement Marcos Riquelme struggling to find form, Liza was thrust into the centre forward role.

Not an unfamiliar role to him, but he showed his ability to be a complete centre forward in a 4-3-3 formation scoring six times and assisting three in an impressive season. 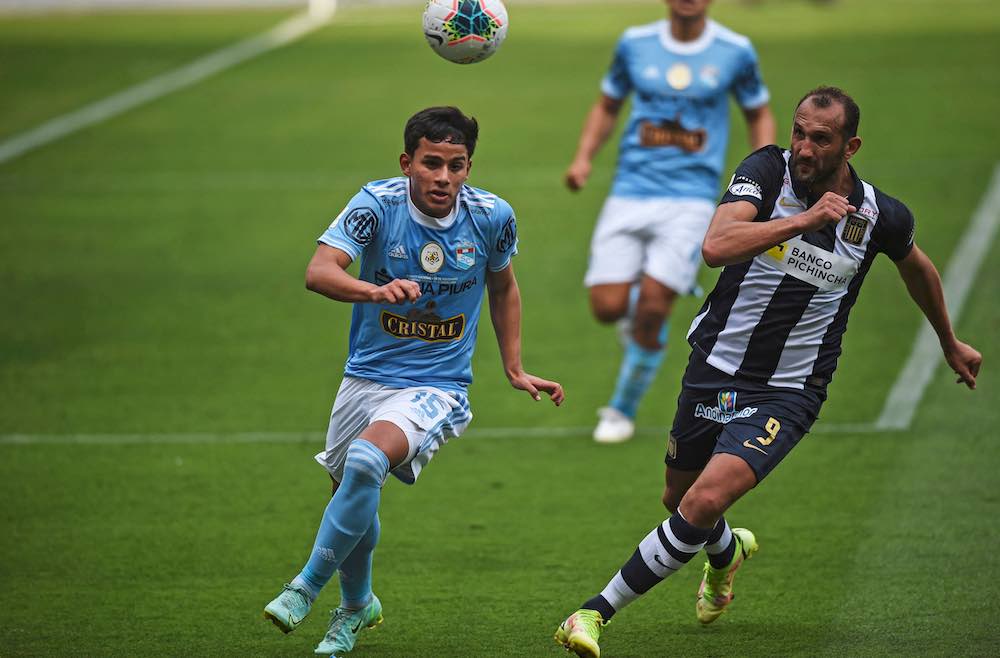 Alianza Lima’s Hernan Barcos (R) vies for the ball with Cristal’s Jhilmar Lora (L) during their Peruvian Championship match at the National Stadium in Lima, on November 28, 2021.

The right-back began the year as third choice but almost immediately became a regular starter and even has become a national team player, now considered to be Luis Advíncula’s long term replacement.

As Lora continues to play, he shows maturity and discipline which help to elevate him above many others of his age.

Combine this with his excellent technical ability and competitive defensive work, he looks set to be a fixture in the national side and a move away from Peru is inevitable already.

He is a small defender with a slight build, but his intelligence and positioning ensure he is not overpowered by any forwards and already produced a fine display against Argentina in the Copa America.

Sanchez’s physical profile makes him stand out in the league, especially considering his young age. He has become a regular for Cantolao and one of the standout young central defenders.

He is not just big, but quick as well. His positioning could use some improvement, but his pace makes up for this in Liga 1 and his 1v1 defending is very impressive.

Cantolao are struggling in Liga 1 and a move to a stronger side in Peru may be a good way to develop further, although for the potential he has, other South American sides may be viable destinations.

Signed from San Martin de Porres, Universitario address a key area in the squad which needed upgrading. Barco provides a composed and reliable presence in the centre of midfield.

He is tidy in possession and is disciplined to operate in a more defensive midfield role. Not the quickest, he reads play well in order to position himself in areas to break up attacks and make interceptions.

Barco’s quick passing and constant movement ensure his side will continue to threaten oppositions whenever in possession.

While not looking hurried in possession he keeps play moving and does not slow down the chance to build an attack.

The step up from San Martin give Barco the chance to develop further his already impressive skill set. 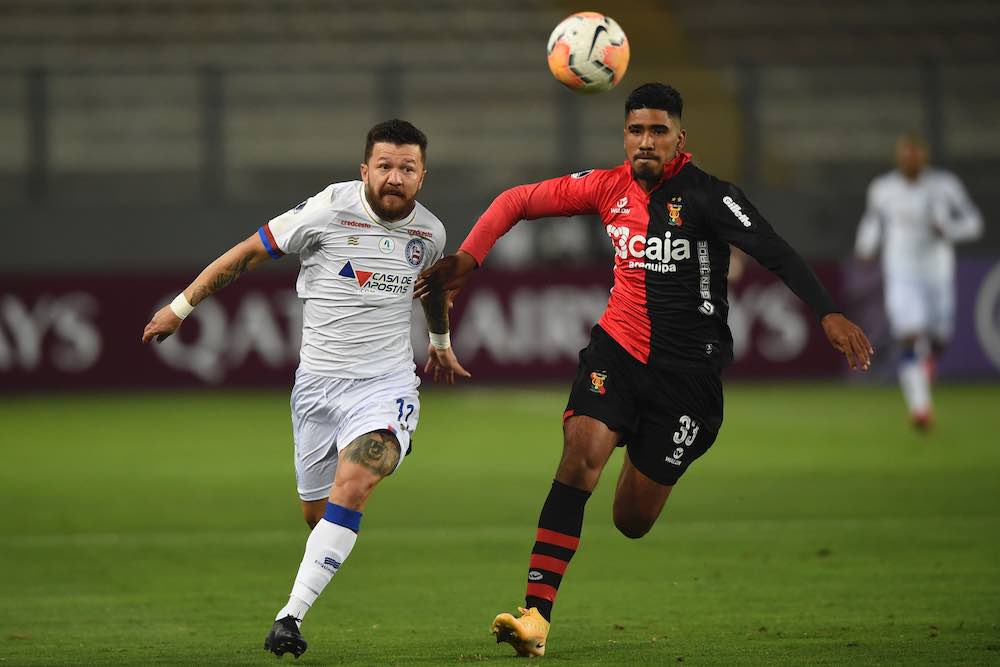 Bahia’s Rossi (L) and Melgar’s Paolo Reyna (R) vie for the ball during their closed-door Copa Sudamericana second round match at the National Stadium in Lima, on October 29, 2020.

Paolo Reyna has now been one of the most consistent and impressive fullbacks in Peru for the last two seasons.

At 183cm he is one of the taller fullbacks in the league and has been a key part of a Melgar side who competed well in the Copa Sudamericana last year.

Defensively resolute, he also reads play well to intercept and regain possession. For some reason often overlooked in Peru, he is yet to make a claim for a national team place though has been on the fringes of call ups.

Another strong performance in the Sudamericana will surely make others take notice; it would be surprising to see him not secure a move abroad soon.

After Alianza Lima were preparing for life in Liga 2 several players departed. The TAS overruling brought them back into Liga 1 and manager Carlos Bustos had to prepare his side to be competitive, he succeeded and surpassed as Alianza became champions in 2021.

Due to this off-season upheaval, Oslimg Mora, usually a winger who had a poor 2020 like most of his teammates, was converted into a wingback. Bustos felt the players available didn’t suit his usual 4-3-3 formation.

Mora regained the form which saw him hyped a few years ago and even showed enough to receive a call up to the national side. After breaking into the side as a slight, quick winger; he is has increased physically and is a robust wide player capable of attacking at pace.

Lutiger thrived in a season-long loan in Trujillo playing for Carlos Mannucci. The left-sided central defender is a tall and composed player with an excellent ability to pick out line-breaking passes.

He is effective in a left-back role as well due to his comfort on the ball and passing abilities. As a centreback he is strong in the air with the ability to match the movement of strikers to protect routes to goal and intercept well.

He returns to Cristal looking to break into the first team with fellow academy graduate Gianfranco Chavez coming off a disappointing return from injury. Between them though, if both on form, Cristal have a bright future in the centre of defence.

Young goalkeepers are finding opportunities hard to come by but Jefferson Nolasco has been able to compete for the first-team role this season and showed impressive potential.

He is an agile goalkeeper with quick reflexes able to react to deflections and parries to get set for rebounded shots. His positional sense is good and at 185cm can claim the ball well from crosses.

His distribution needs to be worked on, with the feet and hands. He is not too accurate with his long passes and needs to improve his ability to move the ball with his feet when receiving passes.

Sport Boys overachieved to some degree last season and managed to secure qualification to the Copa Sudamericana. Jostin Alarcon was one of those who provided the attacking threat which saw Sport Boys be a tough side to compete with on a weekly basis.

His threat on the ball is his 1v1 running and ability to shoot from long range well also. He reacts quickly, able to be creative under pressure with his distribution. He also moves well after the pass; he loses markers and identifies space well off the ball.

With the chance to compete in the Sudamericana, Alarcon will likely raise more interest after an excellent debut season. He managed 2 goals and 4 assists and will expect to better his end product in 2022.

Another bright young talent at San Martin who missed a large part of Fase 2 which ended up seeing the team relegated. He is a quick, tricky and exciting winger who had caught the attention of all sides in the league.

Alianza have brought him in as he currently takes up a foreign spot on the roster as he was born in Paraguay but is eligible for Peruvian citizenship and will be able to change this in 2022.

He has been loaned out for the 2022 season to Alianza Atlético for him to have a full season to continue his development.

San Martin reached the final of Fase 1 and his play on the wing was a key part of their success, Atlético have a great chance to improve on last season with him on their wing.