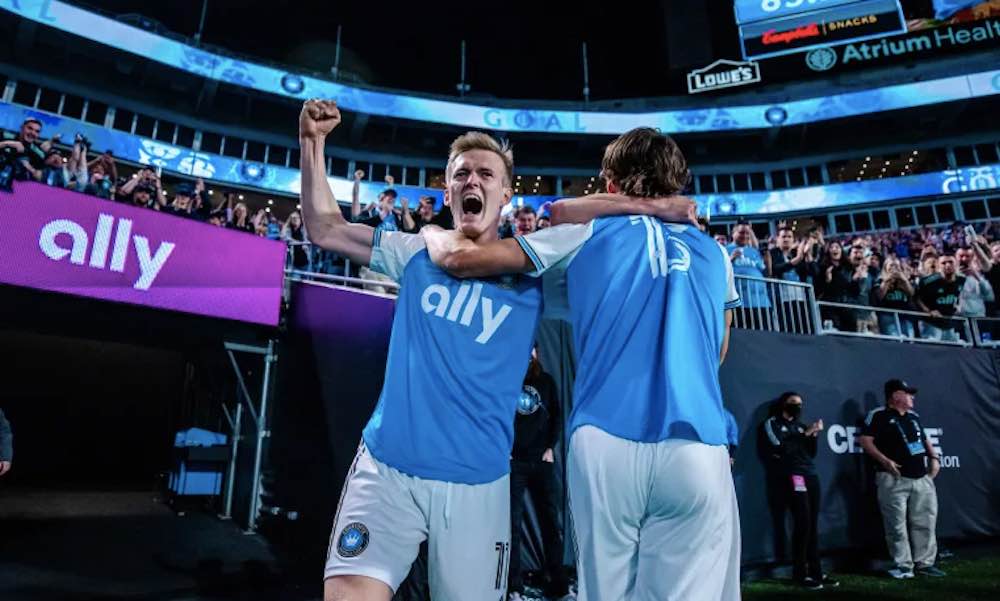 Charlotte FC are off the mark in Major League Soccer. Their first win came on home soil in triumphant fashion against New England Revolution, to the delight of their supporters.

It was an electric start from Charlotte who took a fifth-minute lead when designated player Karol Swiderski turn and shot on the edge of the box after some impressive build-up play.

The Designated Player was up and running, giving his side the belief they have the right centre forward for this difficult expansion season.

Nine minutes into the second half, Carles Gil drew New England level from the penalty spot but it was Swiderski who took back the lead for Charlotte. Again, finishing powerfully with his left foot, this time inside the box from a cut back from SuperDraft pick Ben Bender.

Bender himself settled the time finishing into the top corner with his right foot inside the box on a breakaway goal.

A goal and an assist for Bender will undoubtedly be fantastic for his development and confidence having been drafted first in the SuperDraft by Charlotte, who see a big future for the midfielder.

Manager Miguel Ángel Ramírez will be happy to get that first win so comprehensively and early into the campaign after claiming his side were “screwed” prior to their first game due to issues with signings.

Warnings signs out of the Charlotte FC camp.

Its coach Miguel Angel Ramirez, assessing the roster as it stands: “we are screwed.”

Needs a lot of roster building to happen in two weeks’ time. https://t.co/FYrH1HDvKv

The $5m DP Swiderski has made his impact in MLS on this showing, with his powerful running and physical presence in the front line. He worked hard throughout and was showing with his performance why he has been brought in to spearhead this expansion side.

There may be things to watch out for though, with his attitude towards Bender being concerning during the game.

After 33 minutes, Bender did incredibly well on the goal line to keep the ball in play under pressure and cut the ball back to continue an attack. New England struggled to deal with it and Bender managed to get back on the ball to try to shoot on the turn, but it was gathered up by Earl Edwards Junior in the New England goal.

Swiderski was running onto the shot as well, and as Bender shot, he was ferocious with his anger at the young player, turning back and running at Bender making his frustration clear.

After his second goal, assisted by Bender, the young midfielder tried to join the celebrations and was ignored by the forward despite the assist he had provided.

These frustrations can occur in football but one of the key issues in expansion sides is often creating a team out of a whole bunch of new players.

Swiderski has been brought in on big money and is clearly confident in his ability for the league. Quite rightly too, and it is important for your DP and centre forward to believe in themselves, but it is important your experienced players support those new to the senior game.

Bender went on to score the third and showed no signs of concern, maybe this is just something that was born out of the desperation for a first win to get the monkey off their backs.

The win will provide them with confidence to go on and compete throughout the season, and to get such a big scalp this early will delight all involved with the club.

New England weren’t on their finest form, but Charlotte deserve credit for the win. Ramirez will now be able to look forward to hosting in form Cincinnati next week — a much tougher challenge than they may have predicted a few weeks ago.