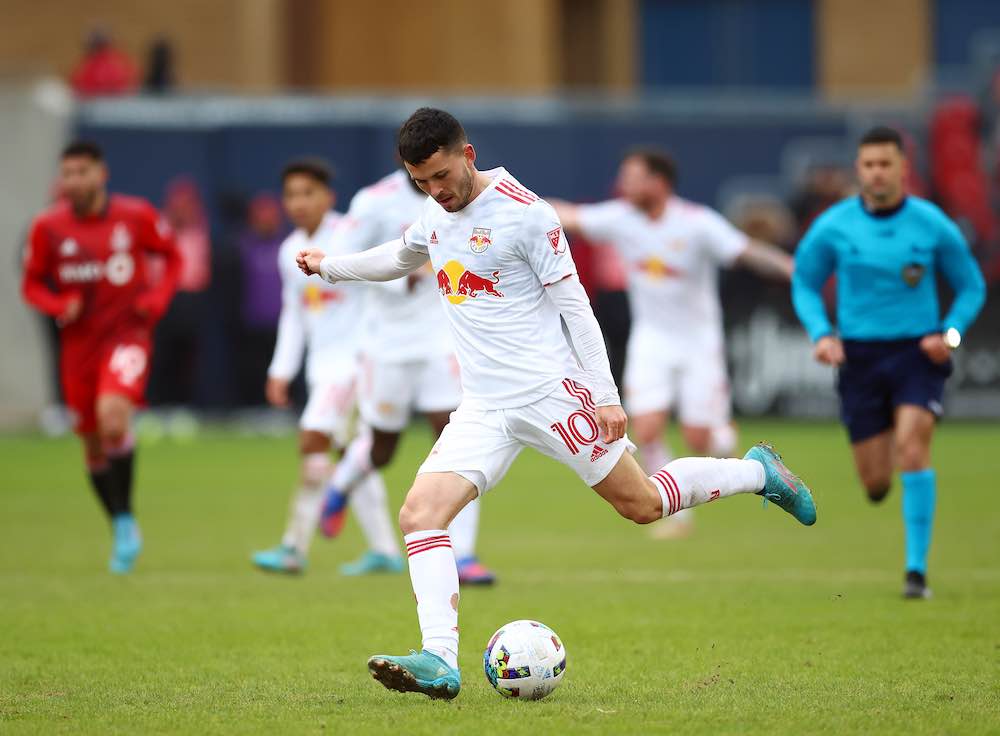 An interview with Lewis Morgan, by Callum McFadden for WFi.

You joined New York Red Bulls in December 2021 from Inter Miami. How do you reflect on your time at the club so far under the management of Gerhard Struber?

“Football wise, I am loving it. I have managed to find the back of the net regularly so far this season which I was not able to do as much as I would have liked last season.

“I am now playing as a wingback or as a number ten depending on what the manager needs from me.

“It is difficult to be away from my family but I have adapted to life at the club and we are progressing the right direction at this moment in time.

“I am enjoying working under Gerhard. He is brilliant! I can’t speak highly enough of him.

“His coaching staff are very good too. He knows how to get the best from me and the team as a whole. He has had success in the UK, in European football and he is now bringing that here at New York Red Bulls.”

Every dressing room has its fair share of big characters. Who are the most lively players in the Red Bulls dressing room?

“Tom Edwards who is on loan from Stoke is one. He is quite loud and lively every single day (laughs).

“Our group are very close and we have great characters throughout the team especially our captain Adam Long. He is a strong leader.

“We have a strong group that can compete and win as we have shown against the top sides this season.

“We know that we can beat any side in MLS on our day and that is my aim and the aim of the group going forward.”

You made your professional debut at St Mirren as a teenager and represented them in the Scottish Premiership and the Scottish Championship. I have to ask you about the Championship-winning campaign under Jack Ross in 2017/18. What are your memories of that season?

“I could wax lyrical about Jack Ross and his coaching ability all day. He is an excellent coach and he got the best out of me at St Mirren. I loved playing under him.

“He is a great man manager and a special coach. We still keep in touch regularly and I have no doubts he will do well at his new club Dundee United.

“That Championship-winning campaign was one of my most enjoyable times in football to date as I was playing regularly and scoring goals as part of a successful side.

“Even to this day, I always keep an eye out on St Mirren and their results. I hope the club can continue to do well going forward.” 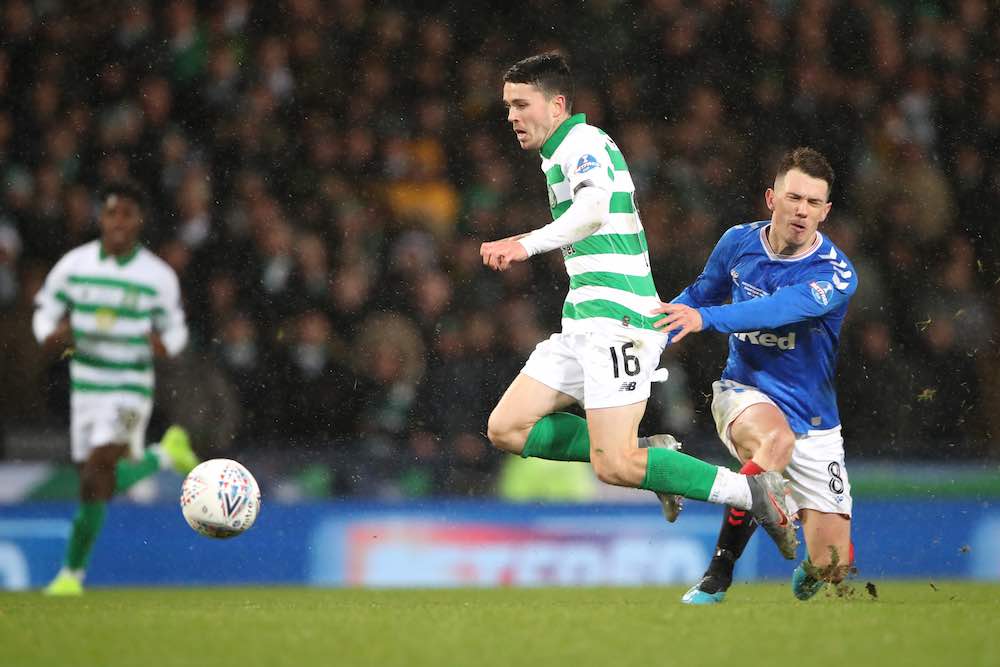 How did it feel when Brendan Rodgers and Celtic come calling for you in early 2018?

“It felt great because Brendan is one of the most coveted coaches in European football.

“Of course, Celtic as a club did not need selling to me because they are a massive club across Europe.

“However, seeing what Brendan Rodgers was achieving at the club made me want to be a part of it even more.

“He gave young players a chance and I thought that it would be a perfect move for me at the time.

“Circumstances and injuries ultimately dictated otherwise but Brendan was a great manager and still is as he is showing at Leicester City in the Premier League.”

You were a part of the League Cup winning Celtic team of 2020 who beat Rangers 1-0 at Hampden Park under Neil Lennon. What are your memories of that day?

“Playing in a game of that magnitude was great and to win made it even better. Any time you have the chance to win a trophy is massive and it was a great day especially to win the trophy against Rangers.

“Playing for Celtic is something I won’t forget and it is something that I am asked about a lot, even out here in the States. I am sure I will appreciate it even more when I retire.

“As much as I enjoyed my time there, I have now moved on and my full focus is on my future here with New York Red Bulls.”

You have two caps for the Scotland National Team. Do you hope that your form at New York Red Bulls can help you force your way back into international contention in the future?

“Absolutely. Playing for your country is the highest honour that any player can have and I am no different.

“I have not yet been able to get back into the squad but I hope that I can get back in provided I continue to perform consistently at a high level.

“Playing at wing back lends itself to the national team but the manager has his decisions to make and unfortunately, I have not got back in there yet.

“That won’t stop me trying. Hopefully, international recognition can come for me again if my club form can be at a high level which is my aim in every training session and every match.”

Your previous Major League Soccer experience was at Inter Miami who are owned by David Beckham. You played for the club in their inaugural MLS campaign and also last season under Phil Neville. What are your memories of your time there?

“I had a great affinity with the club and the fans. I played every game while I was there and I enjoyed it.

“It was an honour to play for the club and work under Diego Alonso and Phil Neville as coaches and David Beckham as part of the ownership group.

“The club had great people across each department and I wish them all the best for the future.”

I have to ask you about the environment of MLS because it is different to football here in the U.K. when it comes to travelling distances for away games. How have you adapted to that?

“I’m glad you’ve asked that question because as we are speaking, we are on our away to LA which is a long journey for us and a multi-hour flight.

“That did take some getting used to but it is a part of the culture of the league and it is exciting to visit new stadiums and teams too.

“The time difference factor comes into things too. Although I have experienced that at Celtic and with Scotland in European or international matches, I have never experienced it for a domestic match. So, that was new to me and another experience.

“MLS has been a different challenge to me but I am enjoying my football and being on the scoresheet as much as I can be.”

Last but not least, Lewis, who would you say have been your toughest opponents from your time in football across Europe and MLS so far? 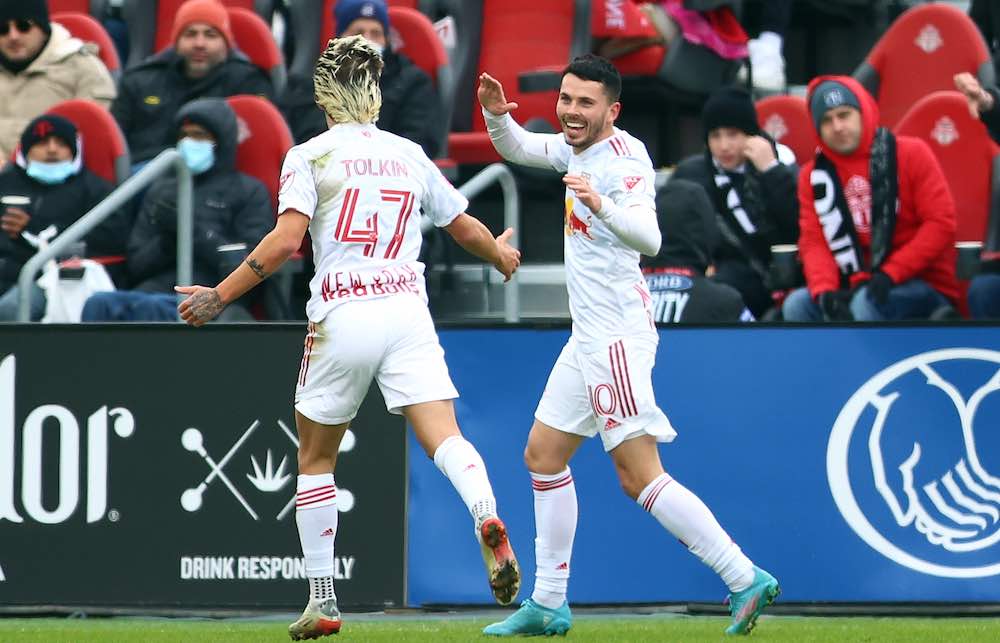 TORONTO, ON – MARCH 05: Lewis Morgan #10 of New York Red Bulls celebrates his second goal during the first half of an MLS game against Toronto FC at BMO Field on March 05, 2022 in Toronto, Ontario, Canada. (Photo by Vaughn Ridley/Getty Images)

“That’s a good question to be fair! From MLS, I would single out our left-back at Red Bulls, John Tolkin. I am not just saying that because I am at the club because when I was at Inter Miami, I always found him to be a difficult opponent.

“He is a good player and it is good to test myself against him and training and play alongside him on a match day too.

“I am fortunate to have played many top full-backs in European football too. Two that come to mind right away would be Denzel Dumfries and Trent Alexander-Arnold.

“I played against them at under 21 level and it is no surprise to see them succeed at a high level for Inter Milan and Liverpool respectively.

“I have to say, MLS has many top players and I think people in Scotland are still a little behind on appreciating the standard over here.

“I think if they watched our league regularly, they would be shocked in a positive sense because the games are of a high quality and we have top sides over here who could give any side in the UK a challenge.

“That being said, I still enjoy watching football back home and it is great to see more than one side playing in European football next season with Celtic, Rangers and Hearts all guaranteed European football of some degree.

“That can only be a positive factor in the growth of the Scottish game.”