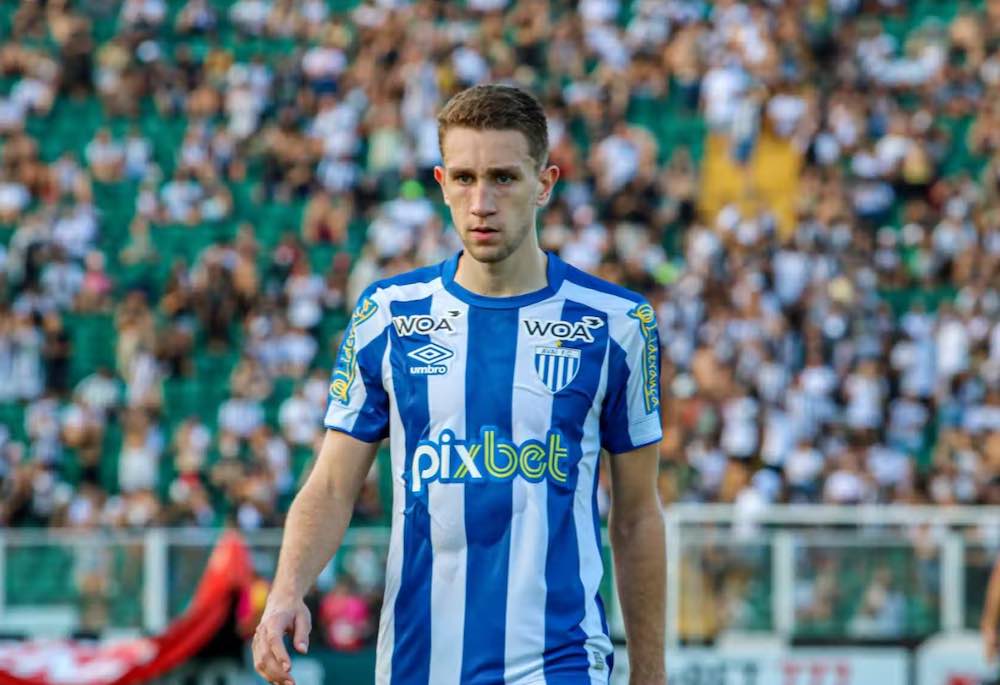 21-year-old Arthur Chaves has been one of Avaí’s top performers this season, in what is his first taste of regular first-team football. His journey to becoming a key figure in the senior side has been one of hard work and patience.

His first footsteps in the sport, came when he was a schoolboy. The moment he chose football was a very proud moment for his family and by the time Chaves was eleven, things started to become a little more serious.

“My first memories of playing football were when I started at school, I remember my mother’s happiness when I signed up for training,” Chaves tells WFi.

“When I finished class, I would go straight to the court to have fun with my friends.

“I started when I was eleven years old at Avaí and since I was a child I saw it as a life opportunity. Every game, every training session, was always very important to me.

“Of course, I had fun and it was often just a joke, but at the same time, I took it very seriously since I was a kid.”

The Florianópolis native spent over ten years in the club’s youth teams where he would develop and learn key skills from the coaches and staff at the club in order to prepare him for challenges ahead.

During this period, he helped Avaí to several regional and national youth titles, including the Copa Sul in 2019.

Across the world, many academy players slip through the net and move on to other things, but that would not be the case for the talented Chaves.

After spending almost ten years at the club nicknamed Leão da Ilha, he finally earned his debut in the first team, coming on as a second-half substitute in a 1–0 Campeonato Catarinense away victory over Metropolitano, on April 4, 2021, a day he will never forget.

“My professional debut was a very happy moment in my life, it was a difficult game in which I played as a volante [deep-lying midfielder],” he says.

“That feeling when the coach called me will certainly stay in my memory forever. I am very grateful for these ten years at the club, everything I know about football is because of Avaí and the professionals who helped me in some way.”

Following his debut, Chaves made two further appearances for the senior side in Serie B as Avaí earned promotion to Brazil’s top tier.

Rather than use his lack of playing time as a negative, he allowed it to be something to take on board and learn what it’s like to be part of a first-team squad.

“In my first year in the professional team I ended up playing only two games, but I was called up for 36 games,” he adds.

“I believe that this time when I was called up but I didn’t play was very important for my evolution.

“I was able to learn a lot about the concentration and the day-to-day of the team, which has helped me to be ready to play this year.”

Chaves’ patience has paid off. From the very first whistle of Avai’s 2022 campaign, manager Eduardo Barroca selected the 21-year-old who hasn’t disappointed.

After performing well in the Campeonato Catarinense, the centre-back has gone on to be one of the first names on the team sheet for Avaí, playing 12 out of the 14 games so far in the Brasileirão — the club’s first season back in the top flight since 2019.

Avaí sit in 11th place and have had a steady start to their league campaign. They have earned decent results against Palmeiras, Internacional and Botafogo to name a few, as well as having sixth-best home record in the division, which gives them a solid platform to build on.

“I believe that my best game this year was against Internacional,” he said.

“It was a game in which I was able to demonstrate all my football and I felt comfortable on the field.”

On May 29th 2022 in a game against Brazil’s current champions Atlético Mineiro, Chaves was extremely close to breaking a world record.

“Speed ​​has always been a characteristic of mine since the beginning,” says Chaves.

“I’ve always worked hard on the field and in gym work to transfer that speed during game time.

“I was very happy to reach this mark as it is a reflection of all the work done over many years.”

With more than half the season still left to play, Chaves gave us an insight into his personal and team ambitions for 2022″

“As a personal goal, I want to play as many games as possible so I can help my team in the best way and keep evolving tactically, technically and physically.

“As for our goals in Serie A, it would be to stay in the top division, which is where Avaí deserves to be.”