Malcolm Christie On Derby, Boro, And Scoring At Old Trafford 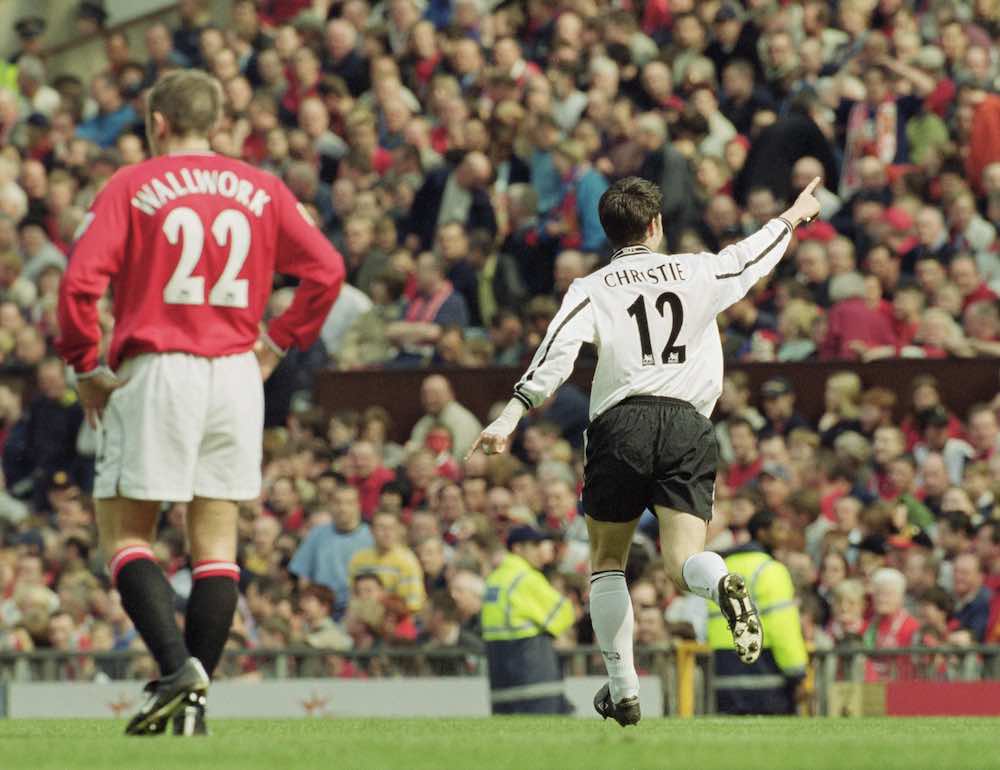 An interview with Malcolm Christie, by Callum McFadden for WFi.

You started in non-League football at Nuneaton Borough before moving to Derby County of the Premier League. What are your memories of that time?

“It was a whirlwind time for me because I was at Nuneaton learning my trade then I went from non-League directly to the Premier League with Derby.

“Not many players have gone from non-League straight through to the top flight so I am proud of that.

“I did not play for an academy as a kid so to succeed and reach the Premier League from his part-time football while working in a supermarket was a great feeling.

“Derby signed me to a three-year contract and I had a real chance at chasing the dream.”

Your manager at Derby was the legendary Jim Smith. How did he handle you?

“Even though Jim was the manager, I think my signing was more on the shoulders of Steve Round who was his assistant.

“He recommended me to Jim after watching me on a couple of occasions. I was a development player to Derby and that’s the way I saw it for myself as I had never trained full-time prior to the move.

“Accessing the facilities and the full-time nature of the training took my game on to another level.” 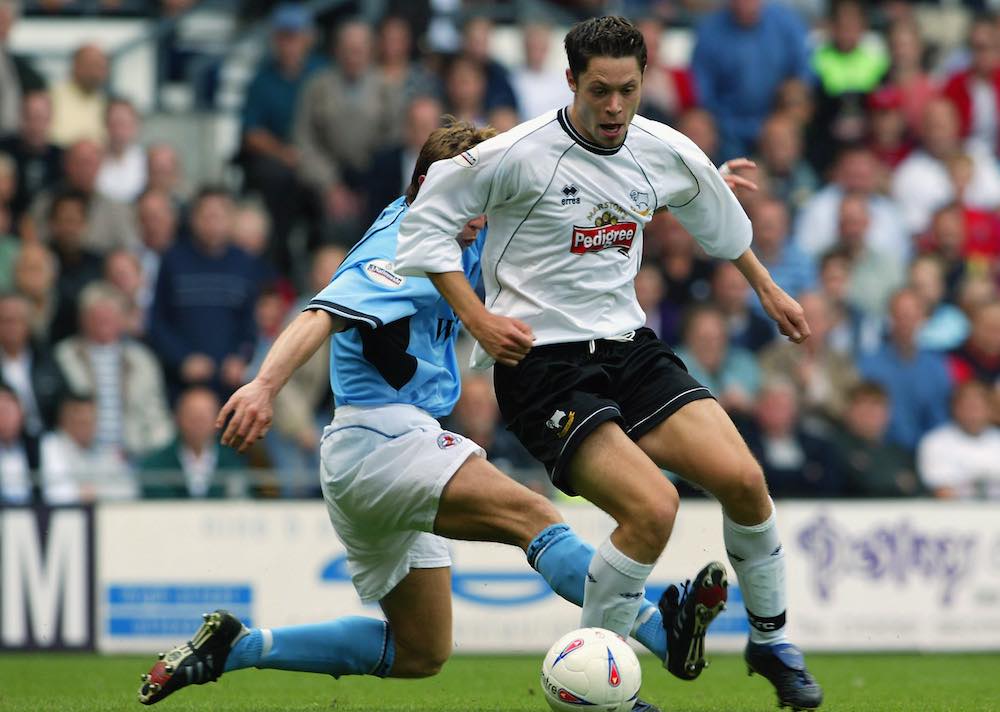 DERBY – AUGUST 10: Malcolm Christie of Derby County and John Mackie of Reading in action during the Nationwide First Division game between Derby County and Reading F.C. at Pride Park in Derby, England on August 10, 2002. (Photo by Laurence Griffiths/Getty Images)

Can you talk me through your first start at Derby because it is safe to say that it was a memorable day wasn’t it?

“I scored two goals on my first Premier League start and it was a dream come true as I had waited so long for that moment to come around.

“I signed in 1998 but had to wait until 2000 for my debut due to Derby prioritising my development to make sure I would be physically and mentally ready once I did get my chance.

“I had dipped my toes in the water with a few cameo substitute appearances but starting was a new challenge.

“Middlesbrough were struggling at the time so there was not a lot of pressure on me that day. I was just glad my mum and dad would be able to get into the crowd that day.

“They always supported me from a young age so for them to see me perform at that stage meant so much to me.

“Scoring two goals that day was unbelievable for my confidence. It was the perfect start for me in the Premier League as a first-team player.”

You also had another memorable moment that is spoken about by Derby fans to this day when you scored at Old Trafford in a famous win over Manchester United. That win helped the club survive in the Premier League. What are your memories of that day?

“That goal meant so much to me and I speak in detail about it in my book because my story is not about winning Premier League titles or playing at World Cups.

“My story is about achieving my boyhood dream and having a moment in time that I can look back and say that I had always wanted to do since I was a child.

“It is the moment of my career that fans remind me of the most because it was such a big moment for Derby and because no one expected us to be able to defeat Sir Alex Ferguson and Manchester United away from home.

“They were the champions at the time and were picking up the trophy after the game so wanted to go out that season on a high but we stopped them doing that. I wish I could relive that moment time and time again.

“The feeling when the ball hit the back of the net at the Stretford End was everything to me. A truly unforgettable moment in my life.”

During your time at Derby, you were called up and played for the England under 21 side. What was that experience like compared to club football?

“It was great because the under 21 side at that time was full of first-team Premier League footballers.

“I played alongside Paul Robinson, Ashley Cole, Ledley King, John Terry, Michael Carrick, Joe Cole and Jermaine Defoe. All of them went on to play many times for the full England side which shows just how good they were.

“I was in and around a special group just eighteen months after stacking shelves in a supermarket whilst playing county football in Peterborough in a regional league against players who were mostly still hungover from the night before.

“Playing with those players elevated me to raise my game because they were incredible in training. You could see just how good they were even at a young age.

“I’ll always remember that time fondly because although I did not represent England at full level, I still had the opportunity to play alongside the best in the country at that age level.”

You signed for Middlesbrough under Steve McClaren in 2003. You won the League Cup with Boro. What a moment that must have been for you and that group of players?

“It was a massively exciting time to be at Middlesbrough because Steve was creating the basis of a quality side.

“I enjoyed being around the club at that time. I could never have foreseen the rise we would go on at the club by winning a major trophy and reaching a European final (the UEFA Cup final in 2005 against Sevilla) within three seasons.

“The first season that I was at the club I played alongside Geremi who was at Real Madrid prior. The standard of player was superb with the likes of Southgate and Schwarzer at the back.

“I was brought in to be a goalscorer for the club and although that did not happen for me due to injuries, I still enjoyed my time at the club looking back.

“Of course, there were times when I felt hopeless looking on from the sidelines at big moments when I could not take part due to injury. It was tough mentally to take and that is a side of the game that I had to fight.”

Unfortunately, injuries led to you returning from football at the age of 29 following a spell at Leeds United. How did you adapt to life after football given the way it ended for you?

“It was a mixture of emotions. Mentally I was not in a good place and it was incredibly hard to turn my back on football after twenty years of working hard to be the best that I could be each day.

“I am glad that I did not write my book immediately after retiring from football because I needed time to reflect on my career and also my life after football.

“I look back more fondly at my career now than I ever did because I did not feel like the same man who scored that goal at Old Trafford upon retirement. I lost love for the game.

“However, I gradually got that love back and I love the game now as much as I used to. I am proud of myself for what I did in the game.”

Finally, Malcolm, what can football fans expect from your book?

“I think Derby fans will reflect on a positive time for the club compared to what is going on there in the present day.

“Middlesbrough fans will get the reflective nature of my time at the club when the club was on a high but I myself was not as I could not play as often as I would like.

“I hope that my book will also appeal to the general football fan because I focus on the reality of my life and career and the challenges and highs that come with that.

“I talk about more than just games of football. I talk about the holidays, the dressing room and what it is like dealing with fame.

“It is so much more than just my football story.”

Malcolm Christie’s book, The Reality of the Dream: My unique journey from non-league to the Premier League, is out now.