John Sheridan: ‘The Limping Physio’ And Working With Gazza & Pleat 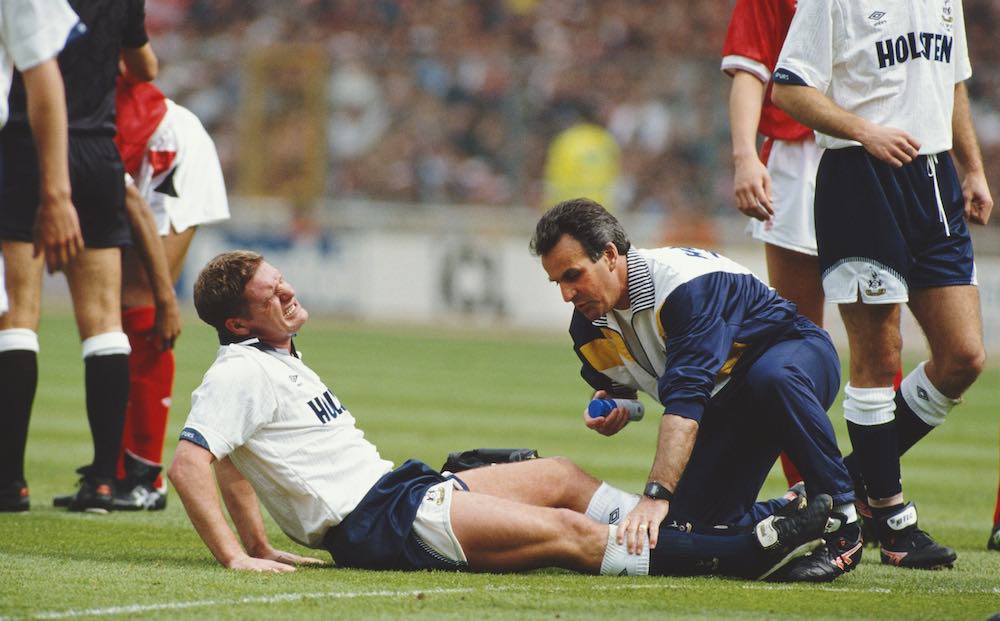 An interview with John Sheridan, by Callum McFadden for WFi.

You’ve written your autobiography, ‘The Limping Physio’ which documents your life in football. Can you describe what the title means to those who aren’t familiar with your unique story?

“Well like most young boys and girls, I loved playing football and played as much as I could each day as a youngster.

“Unfortunately, I had to stop playing football when I was 14 because I broke my thighbone in three places on my left leg.

“That led to me developing a limp because the injury happened while I was still growing which resulted in my right leg being four inches longer than my left leg.

“I had to get an operation to shorten my right leg to bring it in line with the left leg which meant that I shrunk from over 6ft to 5ft 9in although even with the surgery, the limp remained.

“However, despite the hassle and worry of that time, it was worth it for me because if I did not have the operation then I would have required a walking stick long term which was not ideal for me given how young I was and how much of my life I had to come.”

Did you worry about the reaction that fans would have at professional level to your limp when you had to run onto the field of play during a match?

“It doesn’t matter whether you have a limp or not. You always get stick from fans of opposition clubs so I used to try and appease them by bowing to them.

“I would do it at all the grounds no matter the size of the opposition. Whether it was Old Trafford or Anfield, I would always simulate doffing my cap.

“It tended to work and I got plenty of nice receptions from fans of different clubs as I ran onto the field of play.”

David Pleat brought you into professional football as a physio at Luton Town in 1979. How did it feel to enter the game that you love under a manager with real pedigree in the game?

“David is a magnificent man who gave me a chance and did not care about my limp.

“He always stood by his staff and was no different with me. You could speak to him at any time about any issue and he would give you the time and respect to speak openly.

“David did a good job at Luton by winning promotion to the First Division and by playing a brand of attractive football at the club. It was brilliant and no surprise that interest from other clubs was there for him.

“I still have a great relationship with him to this day and I can honestly say that he changed my life because I never envisaged being given the opportunity to work in the professional game given my background but he had that faith in me.”

Following nine successful years at Luton Town, David moved to Tottenham Hotspur and took you with him. During your time in North London, you had a strong working relationship with Paul Gascoigne. What was Gazza like to work with?

“Paul was a great lad. A fun-loving Geordie who loved his football. He was the best player that I ever worked with in my career.

“I had a great relationship with him as a physio because you could have a good laugh with him and he trusted you to look after him and his best interests whenever he required treatment.

“He suffered a horrendous injury in 1991 when he tore his cruciate ligaments in the FA Cup final against Nottingham Forest. So, we were close after that as we worked together on his rehab every day until we could get him back fit.

“Paul did everything that I asked of him during that period and he worked hard to get back fit after such a dangerous injury.

“He used to joke to me that he got more remedial programmes than Radio 2 (laughs). That was Paul.

“Such was the media interest in Paul and his recovery, we would sometimes work at my house to escape the media spotlight.

“I was just delighted that he got back fit and was able to make the move to Lazio in Rome because he was a great player who deserved to have a great career which he ultimately did in the UK and in Italy. “

You worked with Glenn Hoddle when he was a player and then when he was a manager too. What was it like to work with another footballer who was regarded highly in European football?

“Glenn was a lovely man. I found him easy to work with and he had a good respect for me when he was playing.

“That respect was shown when he asked me to go and help him out as physio at Chelsea for a few games when he became manager there which I did.

“He wanted me to join him permanently at Chelsea but I was happy to be a consultant physio at Luton at that stage of my career.

“I have to be honest and say that all of the top players that I worked with were great. That meant a lot to me as I am a massive fan of football and quality players.

“Guys like Gascoigne, Hoddle and Chris Waddle are the type of players that I would pay to go and watch. They were breathtaking to watch and made your spine tingle.

“Those types of players were majestic and I am very fortunate that I was able to not only watch top players like those but to work with them as well.”

During your career, you were invited into the famous Anfield boot room after a match. How would you sum up that experience?

“I was at Luton and we drew 3-3 at Anfield after having to put our defender Kirk Stephens in goal at 1-1 in the game after our regular keeper Jake Finlay went off with a bad injury.

“I had been on the Anfield pitch a lot that day due to the injury and other little niggles to our players.

“After the game, I walked up the tunnel towards the away dressing room when I was called over to the famous boot room.

“It was an incredible experience. I walked in and immediately sampled the Guinness that was handed to me.

“It was unbelievable because I was in the midst of legends of the game in Bob Paisley and Joe Fagan. It was surreal to be sitting in a room with them having a drink and listening to their stories.

“I just sat there listening intently. I learned so much from them. It is an experience that I will never forget.

“I have to say, it was not only the Liverpool legends that treated me well. I was fortunate that I was treated well wherever I went.

“I’d be working at Old Trafford and Sir Alex would chat to me and all the staff as would the likes of Sir Bobby Robson. It was a great era to be involved in.”

Finally, John, where can our readers buy the book because there are so many interesting stories within it?

“Amazon is probably the best place to get it. However, it is available in the major book shops and also at Pitch Publishing direct.

“The book was something that I am thrilled to have done and I hope football fans of all clubs will enjoy the tales and the insight into my era of the game within it.”