Brandon Bye: The New England Revolution Full Back On His Career To Date And Getting Back To The Playoffs 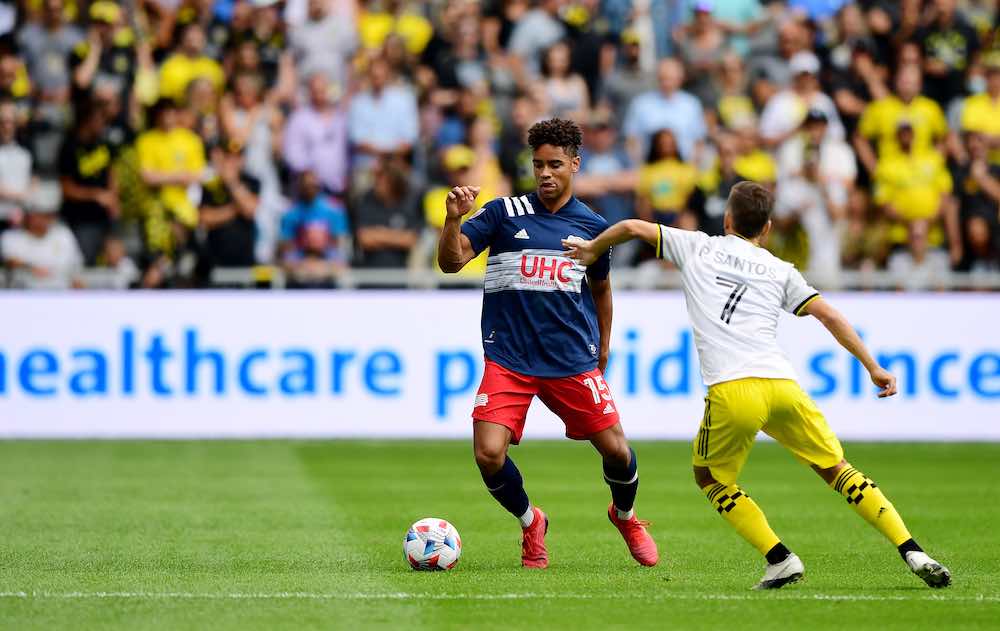 Drafted high in the 2018 SuperDraft what made you so excited about the opportunity to play for the New England Revolution?

“I met with a bunch of teams at the Combine, and then coming in with Brad Friedel he was new too to the club. So the first day he was new to the players and we all had the chance to compete and show what you have.

“It was exciting as some of the guys I knew coming in went to other clubs and were immediately sent to the second team, not getting a look with their first teams.

“Here they were open and I felt good about coming in, and it was fair game and I could be evaluated early and earn my time on the field.

“For Brad to not have already decided upon who his starting 11, would be was a great opportunity he had just taken the head-coach role at the club at the same time.

“I played in midfield, right back, left-back, I played most of the end of the season at left-back but I was able to earn my place and his confidence early.”

Now in your fifth season, what’s your role with the new players coming into the club, especially those who are coming through the same pathway you did?

“I guess I have a bit of a leadership role but I feel mostly like a guy who leads by example and always happy to speak to people and chat off the field.”

The season started with a tough Concacaf Champions League tie with Pumas. The result wasn’t what you would have hoped, but how was the experience for you to play in the tournament?

“It was interesting and a real experience. We have coaching staff here who have played in the tournament and they told us to expect it to be very different (to Major League Soccer).

“It’s hard to understand until you are in the environment. Not the result we wanted but hopefully, we are back there as soon as possible.”

The Eastern Conference is really tight and you’re outside the playoffs on goal difference at the moment. What is it about the club that makes you confident you’ll be in the playoffs again when the regular season finishes?

“It’s all about how we are training, and a great result in the conference against Orlando City was a big six-point swing.

“We can’t just look at other teams’ results and performances, we just need to concentrate on us and get that run going.

“Last year was a special year, we could watch and figure out what teams were doing, but this year we have to focus on ourselves and getting it done.

“I honestly think we just need to keep going and anything really can happen. We just are looking at securing a playoff spot and then we will do what we can from there.”

It was a very successful season last year, winning the Supporters Shield, so how did the extra pressures and workloads of CCL affect the preparations and early parts of the season?

“Every season is different and last year was one of its own, it’s hard to relate and compare last year and the years before it.

“There are new players and changes in schedules and philosophies. This year we are concentrating on ourselves and the home stretch to the season but it will be fun and I’m expecting good things from us.”

Friedel drafted you, but since he left Bruce Arena has been a consistent manager and one with an impressive career to date; how has this stability helped you as a player?

“Stability is great and the whole coaching staff is great to be around and help us as a group and individually so well.”

How did the players, in the defence especially, like Andrew Farrell, with experience help you in adjusting and performing at MLS level?

“They were very important, understanding the way to go about things and how they do things on and off the pitch was really important.

“I watched and spoke with them from day one and I tell the younger guys who are coming in to make sure they are keeping an eye on what the players they look up to are doing so they understand what is required to continue to develop.”

How much of a difference was it coming from the College game to MLS in terms of lifestyle and training going into games?

“Definitely different, but at the same time, you just have to get used to it from the moment you are there.

“There is no waiting from the club and team to allow you to play badly or wait for you to catch up, you have to catch on quick and perform.

“I came from a smaller college, there are some at bigger colleges that send loads of players off to play after graduation but I feel my coach in college prepared me well for coming into the team mentally as well as performance-wise; the fight and ability to show up each day in practice and in all ways to push myself to be prepared.”

Looking at some of the MLS stats so far you have the most successful attacking actions per 90 of anyone in your position, you have three goals and five assists, most from a right-back in MLS; how important is your role in the attack seen in the squad and by the manager?

“You can see that from how me and Dejuan (Jones) play in each game and how we are set up on both sides of the pitch to play in the attack.

“We are outside backs doing two roles, it’s hard work but a fun position to play.

“As a side that likes to keep possession, it helps us get into attacking areas and me and Dejuan can get involved more rather than flying up and down the wings non-stop. It’s a fun position to play!”

How is the friendly rivalry/competition between you and Dejuan?

“For sure, there is lots of banter between us, two good friends, and the others get involved too which is great but at the end of the day, it’s all about pushing each other to keep getting better as players as well as how we help the team.”

The attacking options you have at the club really vary, especially in the centre forward position (including Adam Buksa, Jozy Altidore, Gustavo Bou and now Giacomo Vrioni), there are big differences in the way each plays. How has it been preparing with so many changes throughout half a season?

“For sure, there are a bunch of different 9s with different styles and personalities. The types of runs and how they like to receive the ball can differ and it’s something you have to be ready for.

“Being aware and making sure we can connect with them is essential and something we work towards all the time.

At the other end, Djordje Petrovic has come in and been incredible from day one. Taking over from Matt Turner, it’s been a great start as a group, how have you got that working so quickly?

“Yeah, he has been great, he’s a heck of a goalie and the minute you see him you’re like wow, yeah, that’s what a top goalie looks like!

“He’s come in with a learning mindset like the rest of us and we all want to add to the team which is important and that’s why it’s been a great start.

“Getting shutouts and the saves he makes gives you a lot of confidence and it’s something we can keep building on.”

Who are the wingers that you play in MLS that you find that really test you, but you’ve come off the pitch being really happy with how you stopped them?

“I’m not sure there’s one I want to throw out ahead of the others. Each week you study and prepare for who you’re playing and there’s no one in this league who won’t challenge you.

“With the different systems being used by other teams you need to do your research and understand how they play and find their weaknesses.

“If they come with two strikers I may have more time on the ball or if they have true wingers you know you have your match-up for the game.

“There’s a lot of information from the analysis team which helps. It’s definitely more than in college but there were scout reports and things like that, so it’s just more information than you used to receive but it’s there to help.”

The United States are preparing for the world cup in Qatar, is the national team part of your aspirations and something you continue to work towards?

“Definitely, it’s something to always try to work for and we will see how things go. What’s important is that you can see players in MLS being called up and performing for the national team.

“Seeing that you know you can just keep working and improving and hopefully my chance will come.”

It’s great to see how the league is growing globally, how does it feel to be part of its rapid success?

“It’s exciting to see new teams, new players coming in, More volume, more soccer-specific stadiums and more fans coming to see, Who knows what it could be like in five more years.”

Did you expect the league to be as big as it is now while you were a young player?

“It’s growing and something five years ago you could see it was growing but to reach that it would be at this level already is crazy to think. It’s an amazing thing and I’m so happy to play in this league.”