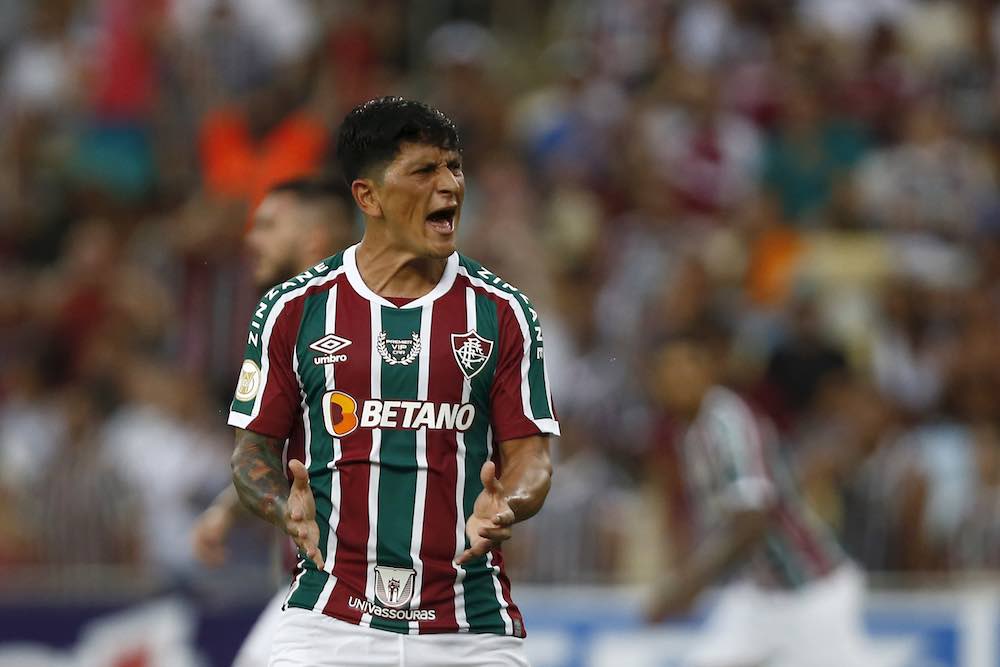 One of the top strikers in the Brasileirão is the Argentine Germán Cano, who plys his trade for Rio de Janeiro club Fluminense.

Cano joined Buenos Aires side Lanús as a youth before eventually graduating to the senior side. His debut came on 17th February 2008 in South America’s greatest club competition — the Copa Libertadores — as a substitute in a 3-1 victory over Uruguayan outfit, Danubio.

Just four days later, he made his first appearance in the Argentine Primera División and a month later, netted his first goal in a match away from home against San Lorenzo.

“They were a mixture of feelings between emotion, adrenaline, nostalgia and happiness,” Germán Cano tells WFi about his debut in 2008.

“There were many years of sacrifice and work, which I felt had borne fruit. And obviously that feeling of nervousness in trying to do my best so that they continue to consider me to play.”

In the years following his debut, Cano was sent out on loan where he played for clubs in his native Argentina, as well as spells in Colombia and Paraguay. After impressing, one of Colombia’s top clubs, Deportivo Independiente Medellín, came calling and decided to sign the forward. The move worked to a tee for both club and player.

Cano went on to score 129 goals in five seasons with Independiente Medellín — a tally that makes him the club’s all-time leading goal scorer. His time at the Colombian club was in two spells, first from 2012 to 2014 and then once again in 2018 and 2019.

His return was perfect, in 2018 he scored 34 times, which was bettered in 2019, with 41 in just 47 matches. Six of those goals came in the Copa Colombia, which Independiente Medellín managed to win for only the second time in their history, largely thanks to their Argentine club hero.

“I think the key is to be constant, persevering and responsible,” Cano adds.

“Like in any job. I knew that I should train daily, give the best of myself and when playing do what I like the most, which is scoring goals.

“Winning that much-desired cup was one of the best feelings of my life. It cost us a lot and being there lifting it is indescribable.

“But knowing that I could give my best to help the team, the club and the people to achieve it. It has a special taste.

“My passage through the Medallo went from less to more. That was where, due to work, I was able to reach my potential and fully develop my virtues.”

After a record-breaking spell in Colombia, Cano decided it was time for a new chapter in his career, by moving to Brazil.

“I knew, and I know, that in Colombia I was not going to play for another team other than Independiente Medellín,” he says of the move.

“My contract ended there and a proposal from Vasco da Gama arrived and with my family, we talked about the possibility of showing who I was in another country like Brazil, where football is highly competitive and considered one of the best in the world, and we thought that It was time to make that wish come true.”

Tonight the semi-finals of the @CopadoBrasil get underway. Game one sees Fluminense host Corinthians.
German Cano will be hoping to give his side the advantage going into next week’s away leg, he already has 31 goals in 2022 and is the current top scorer in both league and cup. pic.twitter.com/7t2mKn35cf

Cano became an instant hit with Flu fans after helping the side lift their first Campeonato Carioca title in ten years, scoring all three goals in a 3-1 aggregate victory over Flamengo in the two-legged final.

His phenomenal scoring form has continued into the 2022 campaign. Fluminense sit in second place in the Brasileiro and are in the Copa do Brasil Semi-Finals.

Cano is the current top scorer in both of the competitions and will be eager to continue his form and help guide the Rio de Janeiro club to silverware.

“Mainly my family was very comfortable in the city of Rio de Janeiro, my son already had his school and my wife her activities,” says Cano.

“Nowadays that counts for a lot, moving and starting from scratch in another city costs. Also, and no less important, I knew that Fluminense was a historical club with big goals and they wanted to count on me to achieve them.

“My targets for the end of the season are to continue in this line of work, sacrifice and humility. It’s the only way to win big things.

“Prepare yourself mentally and trust that you can give your best so the team can do the same and achieve our goals.

“We have a group of very serious professionals who all work side by side and that helps a lot. We empower and encourage each other.”

With already 31 goals to his name in 2022, the 34-year-old will be hoping to continue his form and make it a season to remember.

Loading...
Newer Post
Tom Boyd On Celtic, Motherwell, Captaincy And Scotland
Older Post
Brandon Bye: The New England Revolution Full Back On His Career To Date And Getting Back To The Playoffs