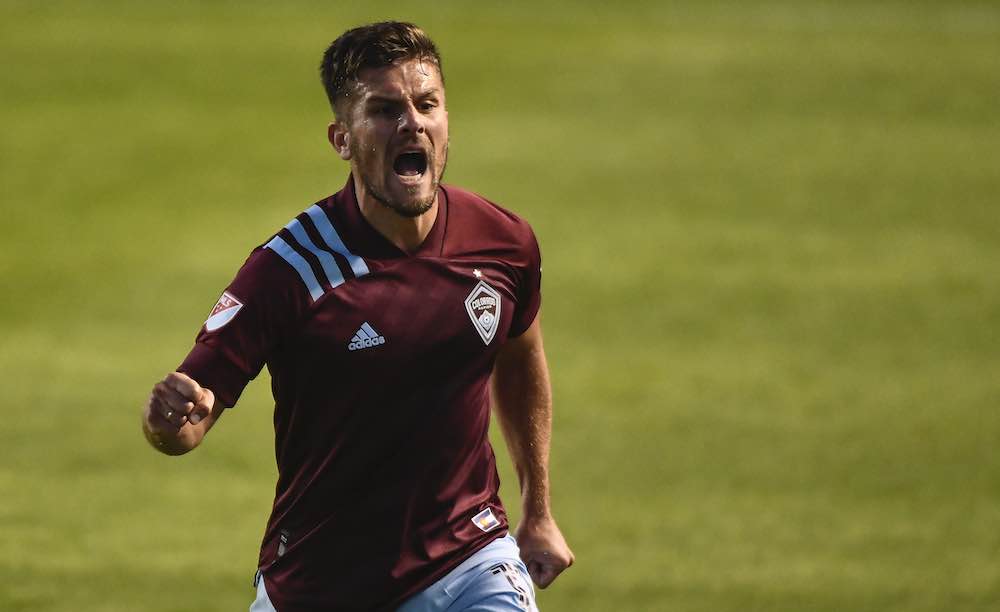 Diego Rubio is in his fourth season with the Colorado Rapids. Since joining from Sporting Kansas City for the 2019 season, the 29-year-old has been a focal point of the attack and a player who arrived with plenty of experience to contribute.

Rubio played across Europe for some big sides. He arrived at Sporting Lisbon in Portugal from Colo Colo in Chile before spending time on loan in Norway for Sandnes Ulf as well as a spell at Real Valladolid in Spain.

He joined Major League Soccer side SKC first on loan in 2016 before making the move permanently. He played three seasons in Kansas City, totalling 65 games, 20 goals and 10 assists.

Over his career before joining Colorado Rapids, he achieved double figures just once in a season, for Sporting Lisbon’s B side in the 2014/15 Liga Sabseg where he scored 14 goals in 21 games.

Colorado has been a good home to him since his arrival, and already this season he has his highest MLS total for goal returns (12) beating last season’s 11.

Rubio has never been prolific in front of goal, but he has found a more suited position and system in Colorado, as well as being in the right places to find shooting opportunities, which has helped improve his goal-scoring.

With an MLS personal high in goals, Rubio has also been on a run of eight consecutive games with either a goal or an assist. He has 12 goals and six assists this season to date, meaning he has played a part in 18 of Colorado’s 35 goals so far this season.

The Rapids have only lost once in their past seven games, and Rubio has played a big part in ensuring his side have seen out some tight games.

According to Wyscout data, he is overachieving his xG which stands at 9.32 for the season so far. What has helped this has been his ability to ensure the shots he gets are well taken. Of the 64 shots he has had so far, 50% have been on target. Ensuring he is testing the goalkeeper as much as possible has been vital in achieving 18 goal involvements in just 22 games this season.

The signing of Gyasi Zardes has helped get the best out of Rubio, who now has more opportunity to roam and find spaces in front of the defence. Zardes is a true pro in the league, and his ability to occupy defenders, hold up the ball, and bring in runners is key to Colorado’s play.

Rubio has been able to play in a more withdrawn position rather than centre-forward. His strengths of receiving the ball and having space to attack in front of him have been unlocked, and his running in behind Zardes is a further threat.

Before, as a centre forward he would have to receive with his back to goal too often, or if trying to get in behind the defensive line his opportunities were often limited to transitional attacks.

Playing alongside the likes of Michael Barrios and Johnathan Lewis from a deeper role to Zardes ensures there are a multitude of attacking threats which gives Rubio the chance to find space. As a club, they are dangerous in transition as well as having different options in personnel going forward.

With this flexibility and less reliance on one player to change games, Rubio has strong partnerships across the pitch which have helped him and his team in getting the best out of each other going forward.

Colorado remains outside the playoff line, trailing Nashville SC who sit in seventh by just two points. Defensively their weaknesses have at times let them down where games they should have come away with wins or at least a draw. They have only won by more than one goal in one of their last 14 games.

Rubio and his attacking teammates continue to go out and give Colorado a chance in every game but their all-round play, especially out of possession, needs to improve if they are going to reach the playoffs again this year.

With time still to play, Rubio can keep improving on his personal best year and look to earn either a bigger contract or a move away. His contract expires at the end of this season but does have an option for a further year.

The Colorado Rapids are really seeing the best of their forward at the moment, and he will surely be key to their plans next season, too.