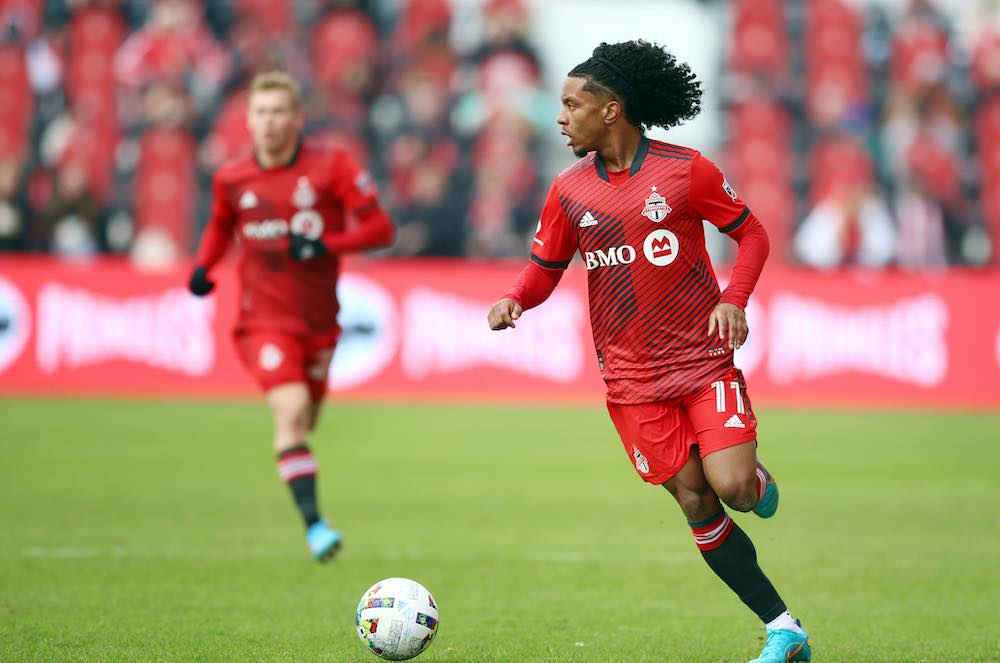 Toronto FC have been one of the most talked about sides in Major League Soccer this season, with their big-money signings like Lorenzo Insigne, Federico Bernardeschi and Mark-Anthony Kaye.

Adding top talent to some already impressive MLS players like Johnathon Osorio and Michael Bradley, they are now ready to make the push for the playoffs this season.

What can’t be overlooked is the abundance of talent being produced by their academy, and a number of graduates were relied upon in the early stages of the season.

The young players earned plenty of minutes on the field throughout the first half of the season showing promise though at times a lack of consistency. This has meant that Toronto sit outside the playoffs at the moment, but by only a margin of four points, making a playoff charge very feasible.

The Insigne deal was announced as the season began, though he could not arrive until his contract with Napoli in Serie A expired. This gave Jayden Nelson the chance to feature regularly so far and has repaid the faith Bob Bradley has put in him.

WFi caught up with Nelson who began with how good it was to see some of his Canadian international teammates performing at the All-Star Event.

How does the All-Star victory for MLS vs Liga MX show the progress of the league?

“In the past year we’ve seen Seattle winning the Concacaf Champions League and you could see the gap has been closing over the last couple of years.

“It’s also great to see that these big players like Insigne and [Gareth] Bale coming into the league, raising the level and higher standard for the rest of the league.

“I watched the game and the skills challenges and it was great to see Kamal [Miller] and others getting the credit they deserve to be part of the event.”

With the signing of Insigne, the attention on Toronto from the media from the outset was huge. You became a key part of the first team then and continue to do so. Were you prepared for such a big role in the team during preseason?

“Before preseason I was training at Anderlecht and coming into preseason I was fit and ready. It went really well and adding in some good performances in the exhibition games I got my first start.

“From there, Bob [Bradley] showed he had confidence in me and how I liked to play and how it fit in the team.

“Knowing bigger players were coming I knew good performances would mean I could still come off the bench for them and help the team when they arrived.”

And what a time to get it. 2-2. pic.twitter.com/QWR0cOFmwW

You started the season at left wing knowing that Insigne was coming and that is his usual position. Since he has arrived you’ve played on the right and centrally, was this something you had been preparing for or have you been looking to show Bob Bradley you can be dangerous in all these roles to keep getting starting games?

“Bob was getting me to fill these different roles in training for a while, even before Insigne arrived, and at times I wondered why he’d try me in different areas, but it became clear he wanted to keep me involved with Insigne, rather than him or me.

“I played that 10 or 8 position a lot in the academy so it’s familiar. Playing at MLS level I enjoy it but I’m still growing.

“Me and Insigne switch quite a bit so it’s great to mix the roles as well so it is fluid and I’m having a lot of fun there.”

Since the arrival of Insigne and Bernardeschi, how have they helped you with your development?

“To see them play every day in training and how they do their stuff is really helpful. Bernardeschi has played with (Cristiano) Ronaldo so he has seen the best of the best and you get to take little bits of advice and try to work towards the levels they’ve reached throughout their careers.”

The start of the season saw many academy players getting a lot of game time, how was it as one of those to have broken into the first team to play amongst others in the same position to become key members of the first team together?

“It was a great feeling growing up, playing with these guys, playing from 14/15 years old and still being like the same team we always have been, now just playing in MLS, it was a real blessing.”

Even with the additions, you and some others are still getting starts as well as plenty of minutes off the bench. Is this a sign of how good the academy system is in Toronto and the confidence they have to move you up to the first team?

“Of course, to have the confidence and belief in us shows how the club wants to develop us to be there.

“To have players like me to break in and play alongside pros with the history Insigne and Bernardeschi and others have, shows they know we can grow and perform alongside them.”

How did the first team interact with the academy while you were going through the age groups, is there anything in particular which makes you more prepared for the next steps?

“Now, with MLS Next, the academy is more in the first team’s face, whereas before it would take more effort for the two sides to interact.

“There have obviously been differences with the different manager changes but in the academy, you knew the first team staff and players were watching.

“Bob’s office looked over our training pitches in the academy and he would come out and give advice and chat to you so you really felt you were getting the help to transition from academy to first team.

“The support and guidance you get has helped, but also the amount of talent in the academy pushes you to work harder and become better players.

“There are so many talented kids here and put into a professional environment, with people that believe in you you can’t really lose.”

As you came into pre-season and prepared for the season ahead did you set yourself specific benchmarks to reach?

“To be honest, I wasn’t really expecting to play as much as I am. I wanted to get four and four [goals and assists].

“I’m still working towards that but it’s great that I am getting so many opportunities in this team to keep improving. I’m really grateful for it.”

A number of players who are part of the Canadian national team have been brought in. How does this help with your goals of representing your country?

With Richie Laryea coming back, he plays that opposing position to you in training, how does he help your development and how does he rank against the other full-backs you face in MLS?

“Richie is the best in the league probably! Going up against him every day, trying to test him and wanting him not to have me running at him is what I try to do each day.

“The things he does to challenge me help in always being prepared for match days.”

There was disappointment in the Canadian Championship and you’re currently 11th in the Eastern Conference, but 7th place is only three points away. How does the team get the positive attitude to push for the playoff places and gain momentum on the pitch?

“We put the game [Canadian Championship Final] behind us straight away. It was a tough defeat to take but we are ambitious and needed to move on and get ready for the next game.

“It is a collective thing amongst all of us to keep each other working hard and positive and goes through the whole organisation.

“The players, coaches, and staff across the whole organisation are confident we can reach the playoffs and be successful. Having that around you every day helps to keep you focused and believe in what we are doing.”

What makes you so confident now, in August, that you will be in the playoff places when the regular season finishes?

“The new additions and the hunger the whole club has. We are all on the same page and it’s the best thing to have a fully committed squad that is improving every game together.”

Bob Bradley seems to have added players who have managed to mix well and get settled quickly amongst the rest of the squad. There is often a sense, especially when we see you celebrating goals together, that people are having a lot of fun playing together.

“I think that comes from training. Everything you see in the game comes from what we have been working on throughout the week and we can enjoy the combinations and build-up play to score those goals as we do in training.

“It is a good feeling to hear that you can see the fun we are having. Being part of this team and being able to go out and play is great.”

A number of the national team players are on the Toronto FC roster, with some big-name players playing in Europe right now like Alphonso Davies at Bayern Munich. As we spoke of earlier, what makes Toronto a great club for players to play and be selected for the national team?

“The professional environment the club provides from the facilities, everything on and off the pitch. There is nothing left out and it is hugely beneficial to us.

“Of course. I have big aspirations for my career and interest in playing in Europe. I feel this club is a great stepping stone for me to hopefully one day achieve all my dreams. It’s a great place for me, especially at this point in my career.”

Are there particular leagues you follow that you think would best suit you?

“I watch a lot and enjoy Ligue 1 and the Bundesliga, some of the [English] Prem [Premier League] as well. I think France or Germany would be great destinations for me in the future if the right opportunity were to come up.”

How do you feel about Canada qualifying for Qatar, and how does it feel in Canada with fans enjoying this moment so much?

“It’s crazy, such a crazy feeling. Most of these guys have grown up together and seeing them on the top stage at a World Cup is crazy. It’s almost something you don’t think about as a Canadian until recently.

“[The fans] give us an extra push, they believe in us and it makes us so motivated for them to see us performing well when it gets to Qatar.”