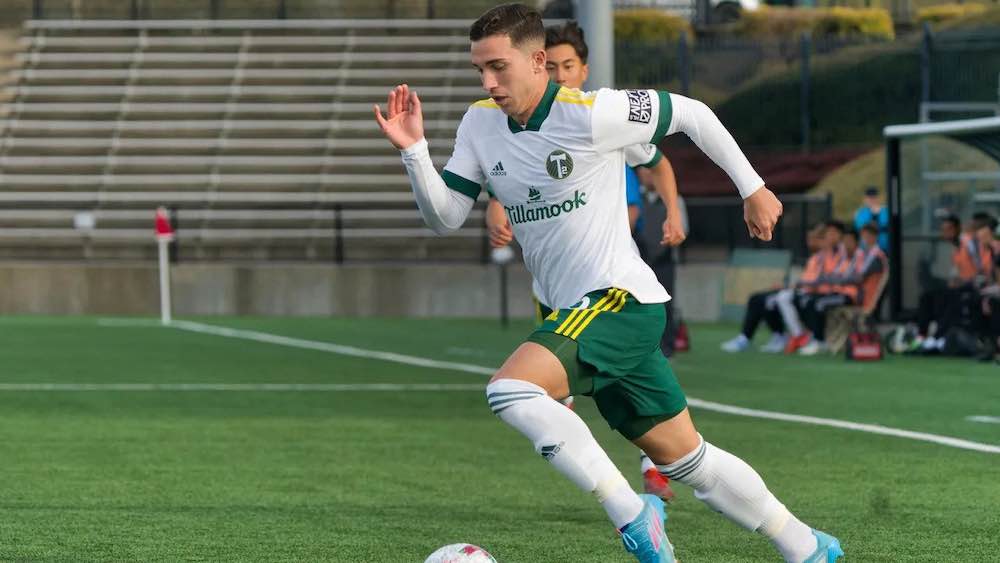 Major League Soccer has become a hotbed for young South Americans in recent years, as the league continues to grow in strength and stature.

The league has become a perfect stepping stone for Latin American talent to develop, as players attempt to pursue a dream move to Europe.

One of the many players to take the leap is Brazilian forward Nathan Fogaça.

Nathan was born in the municipality of Palmeira in the micro-region, Ponta Grossa, the place he began his footballing journey.

“The first memories are when I was little,” he recalls. “I lived in the countryside, I remember that I always came home from school, ran to lunch and then in the afternoon I went out to play with my friends on a field that was in front of my house.”

At the age of 13, Nathan was snapped up by one of the biggest clubs in his local state of Paraná, joining Coritiba.

After several years of playing in Coxa’s youth ranks, Nathan was moved up to the first team in May 2018 by the then-manager Eduardo Baptista, before making his debut in June of that year in a  1-0 win over CRB in Brazil’s second-tier.

A month later, he would score his first senior goal, in a 1-0 triumph over Goias, achieving the dream of any youngster growing up.

“My evolution at Coritiba was certainly very good,” he tells WFi.

“I always dedicated myself to the maximum in search of evolution and proving that I could fulfil my dream there.

“On my debut, I certainly had a lot of butterflies in my stomach. I spent years watching other players from the outside, so when it came to my turn, a movie showed everything that had happened until that moment and it was certainly one of the best days of my life.

“I believe that the time I had on the field, I showed that I deserved that opportunity and I felt very good.”

After seven years at Coxa, Nathan opted to move, not only to a new club but to a new country, joining USL Championship outfit, San Antonio FC in 2021 on a loan deal.

Despite being away from home comforts, the Brazilian enjoyed a decent campaign, racking up 13 goals as San Antonio narrowly missed out on a place in the 2021 USL Championship Final, exiting on penalties to eventual winners, Orange County SC.

“I confess that this change was at the right moment in my life,” Nathan says of his first season outside Brazil.

“The beginning is always difficult because of the adaptation to another culture, another way of playing, and also the language — at that time I couldn’t speak practically anything — but over time, and with the help of everyone, it was a quick adaptation and a lot of learning.

“I feel I did well. I was able to adapt to the difficulties and I was able to regain the confidence that I had lost a little bit.

“The differences I noticed on the field compared to Brazil was more physical, contact football with a lot of intensity, with great demands in terms of fulfilling a role and resilience.”

After his loan spell, Nathan returned to Brazil, where he played three times for Coritiba in the Paranaense State Championship, before leaving again. This time permanently, joining MLS side Portland Timbers.

“I believe I needed to change my environment again, seek my space elsewhere, put other goals ahead,” he adds.

“I already knew a little about the culture and Portland Timbers was willing to hire me. I decided to accept it with great joy.”

After impressing for the Timbers’ second team, Nathan was eventually called up to the first team. He enjoyed the perfect debut, scoring a brace in a 7-2 victory over Sporting KC and earned himself two wooden chips, as per the Portland tradition.

“I want to do my best, keep evolving, keep scoring goals and helping the team,” he says, reflecting on his debut.

“I believe that when you dedicate yourself to 100% of what you like, things happen naturally.

“I was very happy with the two goals in my debut, this certainly motivates me to continue giving myself to the fullest.”

Nathan went on to comment on his future ambitions on America’s west coast:

“My ambitions are definitely to keep winning with the team, keep scoring goals and be able to surpass my numbers from last year.”

Loading...
Newer Post
Vagner Love On Winning The UEFA Cup, Representing Brazil, And His Adventurous Career
Older Post
On The Ball: 2 Teams Who Have Had A Good Build-Up To Qatar 2022