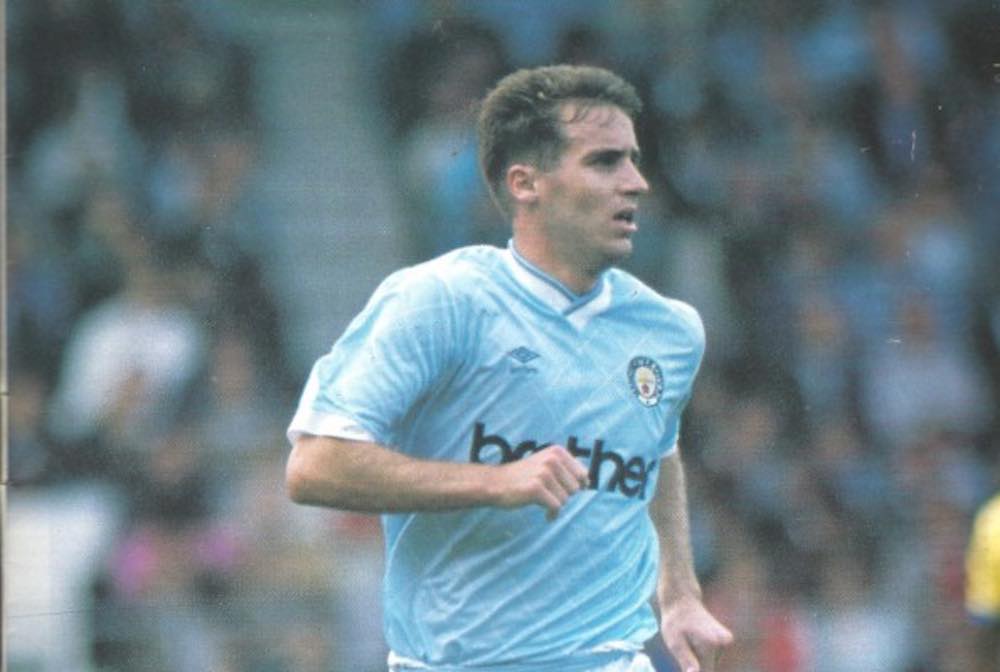 Normally a goal per game is considered exceptional for a striker but you scored 340 in a single season as a youth player growing up for Bolton Lads’ Club. It is a Guinness world record to this day. Can you sum up what it’s like having such a feat associated with you?

“It was a superb season for my team and myself in terms of goal-scoring, without question.

“My team won everything in front of us so it was a memorable time for all associated with Bolton Lads’ Club.

Manchester City signed you after that incredible season beating a host of clubs to your signature. What was it like to sign for them?

“My auntie had bought me a Manchester City shirt at the age of 10 and took me to Maine Road to watch a game when I was young.

“I was blown away by the noise at Maine Road and the sheer size of it. I loved watching Peter Barnes and I wanted to be a player like him at City one day.

“Thankfully, I was given that opportunity.”

You played a pivotal role in City winning the FA Youth Cup of 1986 against Manchester United. What was it like to defeat United of all sides in the final?

“It was a fantastic feeling. We had a chance of playing United if both of us made the final as we were in the opposite half of the draw.

“I was actually gutted that we didn’t defeat them by more than 3-1 on aggregate over the two games because we were by far the better side.

“It was a great experience overall to win the trophy given its prestige and because we were the first Man City side to win that particular trophy for the club.”

Celtic and Scotland icon Billy McNeill was the manager of City who handed you a debut for the first team against Aston Villa on New Year’s Day 1986. What was Billy like with you as a young player?

“My first dealings with Billy were as a schoolboy after I had broken my leg in my first year.

“I wanted the all-clear to go and play for the England youth side after I had finished my rehab.

“The physio told me that Billy would call me and my dad at night to discuss the situation rather than the physio himself giving me the all clear which is what usually happened.

“So, Billy called and stopped me from going away to France with England as he wanted me to fully prioritise my recovery before going away on such an international trip.

“Well, I was absolutely gutted especially considering that was my first dealing with him.

“However, I have to say that he was a tremendous guy and I soon realised that he protected me and knew what was best for me at that time. He was a remarkable man.

“In regards to my debut against Villa, I could not believe that I got on at Villa Park that day.

“It was a great ground to make my professional debut at, and getting those first minutes for City is something that I’ll never forget.”

How do you reflect on your time with City as a whole?

“My time playing for the club was the best time of my life. Walking out at Maine Road was an incredible buzz.

“We had success with the youth team and that lead to me breaking into the first team which was great for me because that was my dream and I achieved it.

“The club was going up and down between the first and second division when I broke into the team.

“I scored a lot of goals in the first couple of years as I broke through then broke my back which kept me out of action for a long time.

“Then, I returned to the first team upon my recovery after nearly two seasons out and knew that I needed to make an impact at City or move on elsewhere to play regular football.

“Thankfully, I was given regular game time in the second division and I was the top scorer for the club as we returned to the first division.

“It was a bittersweet symphony for me that season because when I played I was scoring goals but for whatever reason, I was in and out of the team which was difficult for me mentally.”

You join Bournemouth from Manchester City and score goals regularly for the Cherries in a short spell with the club before moving on to Oldham Athletic. How do you reflect on your time down on the south coast?

“It was difficult for me because Bournemouth were not as big a club as Manchester City and it did not give me the same feeling that City did.

“I missed playing in front of the big crowds at Maine Road but I scored goals there as you said so it was a good time football wise.”

Upon joining Oldham under Joe Royle, you had a series of injuries which hampered your game time. How frustrating was that for you?

“Joe did a great job for Oldham but he did not do so great for me personally.

“The AstroTurf at Oldham flared up my ankle which I had injured a few times prior, and we locked horns a few times after that.

“Oldham was not my best time in football because I was always fighting to get fit which was frustrating for me.”

You played in Norwegian football for Molde on loan from Oldham. What was your first foreign adventure like?

“I had an operation on my ankle and as I was returning to fitness, I knew that I needed game time if I was to forge a career again.

“I was on the bench for the last game of the season, against Manchester City of all teams. I came on as a sub and bagged one which was a great feeling.

“Despite that, I needed more games than just one game to get my sharpness back so my plan was to move to Norway to get as much football as I could to help me in the longer term.

“I was not fit to play at that level because it was physical in Norway and I needed more time to build up my fitness before being thrown into the deep end over there.”

Finally, Paul, you have just published your autobiography, ‘Lethal: 340 Goals in One Season: The Extraordinary Life of Paul Moulden’. What can readers expect from the book?

“I was in the England team up until under 18s and I played alongside the best young players in the country, such as Tony Adams, Tim Flowers, John Beresford and others.

“Those were fantastic times, and many expected that my career would follow the same trajectory as those players but injuries were not on my side.

“Football fans look at the likes of Ryan Giggs and Paul Scholes who played until they were in their late 30s and think that is normal but it is not. They are the exception.

“I have written the book because I want people to know why I did not achieve what I should have because I get asked the question a lot.

“I was not out boozing or gambling or being daft, I was just desperately unlucky with injuries, and I want people to find out the reality of my journey and how I reflect on my life and career.”