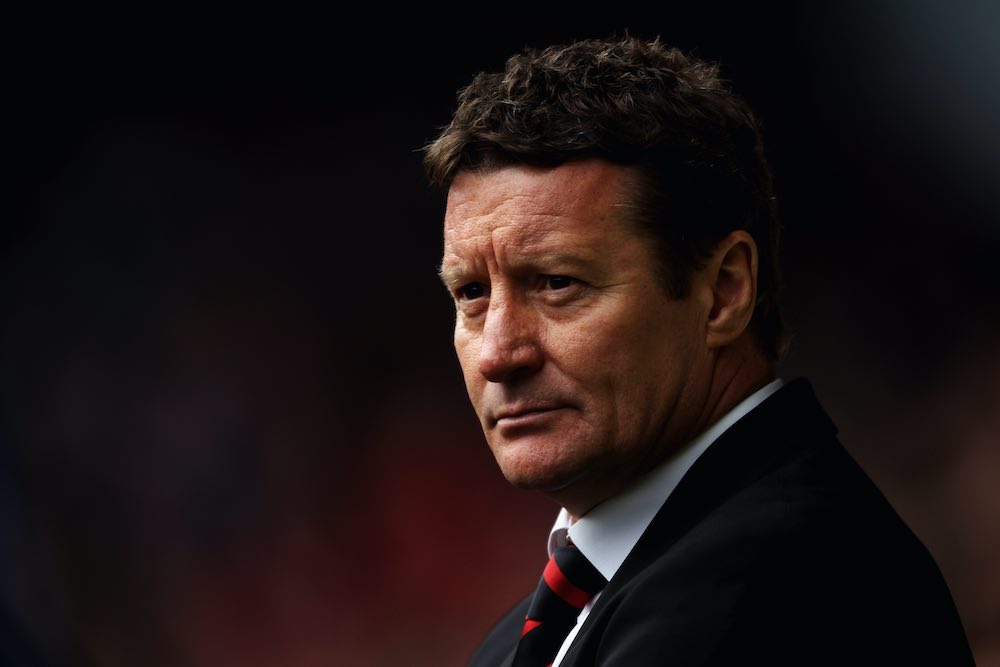 An interview with Danny Wilson, by Callum McFadden for WFi.

You won the League Cup as a player with two different clubs – Luton Town and Sheffield Wednesday. If we start with Luton Town first, can you describe what it was like to play such a big part in the success of 1988 at Wembley by scoring in the 3-2 victory against Arsenal?

“My time at Luton overall was a great time in my career. Winning the cup undoubtedly topped it off.

“We were massive underdogs going into the final against an Arsenal side under George Graham were one of the best sides in European football.

“Despite that, we went into the game believing that we could get a result because we were a good side in our own right with internationals such as Ricky Hill, Steve Foster and Brian Stein.

“The game itself was up and down as was reflected in the 3-2 scoreline.

“I was more than delighted to score the equaliser to make it 2-2 with eight minutes to go in the game before Brian Stein was our match-winning hero by scoring at the death.”

Your manager at Luton was Ray Harford. What was he like to work for?

“Ray was a brilliant character. A lovely man on and off the pitch. Very calm in his manner and a great coach.

“He went on to win the Premier League alongside Kenny Dalglish which shows just how highly regarded he was.

“Ray loved coaching and I think he preferred being a coach rather than being a manager but you have to tip your hat to him for what he achieved with us at Luton Town.”

You moved from Luton Town to Sheffield Wednesday in 1990 and within 12 months, you won the League Cup again at Wembley. This time it was against Sir Alex Ferguson’s Manchester United side. How would you sum up that occasions under Wednesday manager Ron Atkinson?

“Playing under Ron was great because he gave you so much confidence and wanted senior professionals around him which I was at the time.

“He trusted you to do your jobs and he let you go and play your natural game.

“In doing so, he brought an exciting brand of football at Sheffield Wednesday and a confidence that we went into any game believing that we would not lose.

“That attitude was the same against Manchester United in the final of the League Cup.

“We prepared for the game in Sheffield at the start of the week ahead of the final before heading to London a few days prior to the final itself.

“He had a comedian – Stan Bordman – with us at the hotel which was brilliant for relaxing us because we all laughed for the build-up to the game.

“That feeling of relaxation took the pressure off of us going into the game at Wembley.

“We played our game at Wembley and won 1-0 on the day to bring the cup back to Sheffield. It was a whirlwind and another great day in football that I will never forget due to the unique nature of the build up to the game and the performance that we put in as a team on the day as well.”

You represented Northern Ireland on 24 occasions during your career. What was international football like compared to club football?

“My mother was from Derry so I was fortunate that I was eligible for Northern Ireland.

“It genuinely meant a lot to me to pull on the jersey because of my family heritage and the pride that representing a nation close to your heart brings.

“In terms of what it was like compared to club level, playing international football was very technical rather than the hustle bustle of domestic football.

“It was demanding and very physical, another level up from the Premier League which enabled me to further develop as a footballer for my club sides too.”

Was moving into management something that you always wanted to do upon retirement?

“It was not something that I overly considered however Barnsley showed interest in myself and Viv Anderson to join them as their new player-coaching team.

“We were at Sheffield Wednesday so spoke to the chairman who granted us permission to speak to them and off we went.

“I was the player-assistant manager to Viv before taking over from him when he left the club to join Bryan Robson at Middlesbrough in 1994 to mark the start of my managerial career.”

You led Barnsley to promotion to the Premier League in 1997, winning LMA manager of the season in the process. That must have been an incredible feeling for you.

“It was such a special time for me and for the club.

“The town of Barnsley was going through a tough period with the closing of the pits which led to rampant unemployment for a period nod time in the area.

“It was tough for everyone and the club was not in the best shape either following the costs of implementing the Taylor report to ensure that Oakwell became an all-seater stadium.

“However, the community and the club pulled together and it was a great achievement for the club.

“It was not just down to me but the entire playing and coaching staff as well as the Barnsley community as a whole too.” 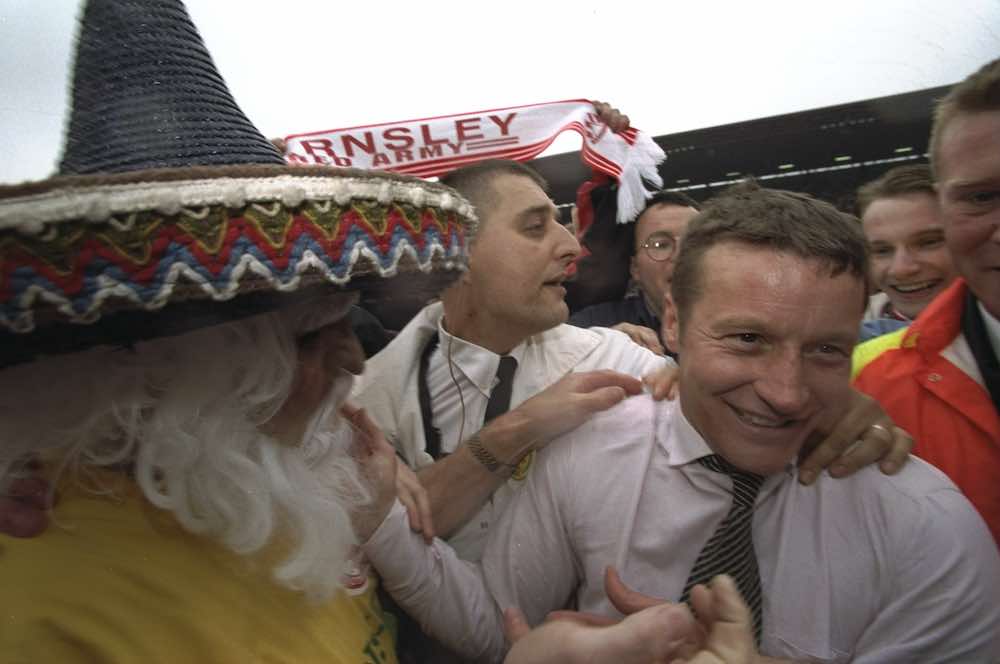 27 Apr 1997: Danny Wilson (right), the Barnsley manager is mobbed by jubilant fans after winning the Nationwide Division One match against Bradford at Oakwell in Barnsley, England. Barnsley won 2-0 and gained promotion to the Premier League. Ben Radford /Allsport

You moved from Barnsley to Sheffield Wednesday as manager in 1998 to manage your former club in the Premier League. What was it like managing at that level because so many coaches aspire to do so?

“Managing at Premier League level is challenging because everything is magnified when you are at the top level.

“Every decision that you make is scrutinised and analysed by so many people such is the attention that the League generates.

“Staying in the division is the holy grail for so many clubs and I won’t be the only manager to suffer the consequences of that with my job as the pressures to succeed are so high.”

You managed arguably one of football’s biggest mavericks in Paolo Di Canio. What was he like to work with?

“I was a young manager when I worked with Paolo and I would manage him differently now than I did back then.

“There were lots going on behind the scenes during my time in charge at Wednesday, which made it difficult for everyone at the club, including myself.

“However, although I lost my job at Wednesday after a couple of seasons, I have managed 1,000 games which shows that I had to be doing something right as that is a milestone that not many managers have reached in their careers.”

You had success with Hartlepool United by taking the club to League One during your time in charge there. What was it like managing a team to promotion at that time?

“You do not tend to go into football clubs when things are going well. That was the case at Hartlepool as I went in after they suffered relegation to League Two.

“I was tasked with taking them back up and thankfully, we did that despite a difficult start to the season.

“Promotion success always means a lot as a manager as it is the result of strong efforts over a full season coming to fruition.”

You nurtured young talents such as Harry Maguire, Charlie Austin and others who went on to have top careers in the game. Was player development one of your strong passions as a manager?

“It absolutely was. You need the extra enthusiasm to want to produce young players and give them a platform to grow and succeed.

“Everyone needs a break and the beauty of working with young players is that they tend not to have any fear in regards to the opposition that they are playing such is their rawness and desire to impress.

“However, if a player is good enough then they should play regardless of their age as every manager will do whatever it takes to win.”

Last but not least, Danny, you have just written your autobiography which is a fascinating read about the ups and downs of football. Given the time that you have had in the game as a player and as a manager, what is your view of the modern game?

“Football has undoubtedly changed over the years in many ways.

“First and foremost, the evolution of facilities for players and fans has been great to see.

“The pitches that players play on across the leagues are immaculate and set up for good football.

“There are more stats available now than ever on the game which can give a manager quality information in an instant which is also a positive.

“I enjoy watching the game as there are some terrific teams at the moment such as Manchester City under Pep Guardiola and Liverpool under Jurgen Klopp.

“I think that football is in a good place now and the fact that referees are allowing the game to flow more with more physicality coming back into play is a good thing for the game too.

“You want to see competitive football rather than a procession and I am enjoying the football that I am seeing across all of the divisions in England at this moment in time.”