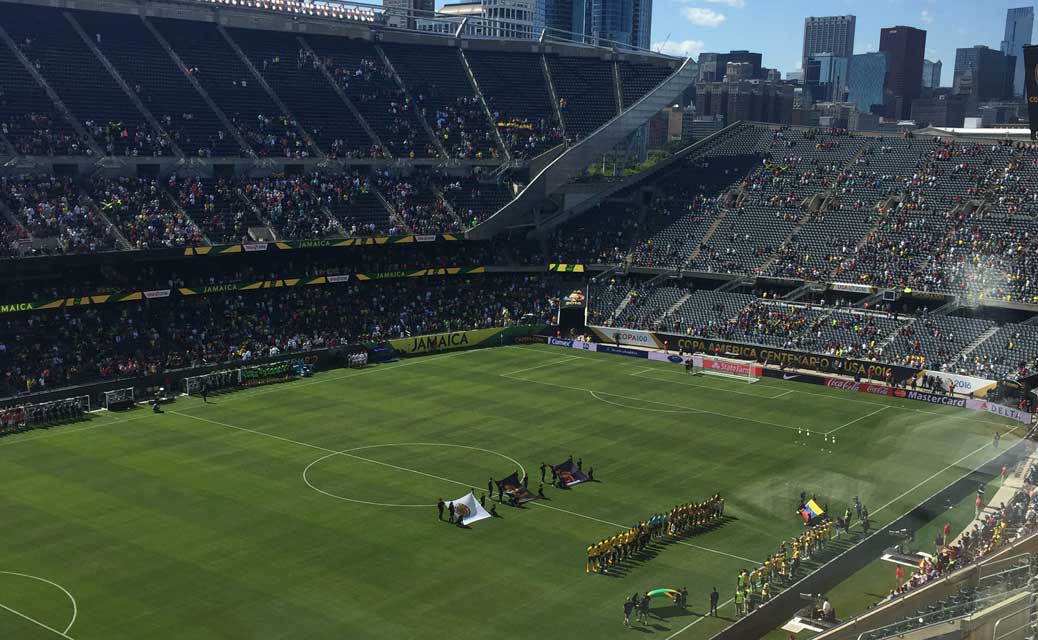 Seated deep in the bowels of Chicago’s Soldier Field after his team’s 1-0 win against Jamaica, Venezuela manager Rafael Dudamel talked not about the talent that his team’s next opponent, Uruguay, possessed, but about how much he believed in the talent his team possesses.

“The bulk of our attention is going to be focusing on our conviction of what we can do as a team.”

Dudamel said when asked what his team would do to prepare for the Uruguayans.

And who can blame him?

The Venezuelan squad on the pitch Sunday afternoon didn’t look like the team that has never won this competition, or the only South American side that has never qualified for the World Cup.

His team looked confident on the ball, particularly in the first half hour. The ball whizzed around from side to side, a series of quick passes that the athletically superior Jamaicans struggled to keep up with.

The dominance culminated in the prettiest team goal yet scored in this young competition.

Salomón Rondón pinged the ball to Alejandro Guerra, who poked it through to the young Josef Martínez, who calmly beat the Jamaican keeper for the match’s lone goal.

Later, with Jamaica reduced to 10 men, the Venezuelans continued to hold possession, and later on, when their legs began to give out, they hunkered down and held off a final push from the Reggae Boyz.

It was a full 90-minute effort, one that Dudamel was understandably proud of.

His team, a combination of youth and experience, now control their fate in the difficult Group C. Yes, the task gets much harder, with Uruguay next, a side defeated by Mexico late last night.

The Uruguayans will know that their entire tournament rests on their performance against Venezuela in Philadelphia. The advantage favors the Venezuelans, who continue to control their fate with just a draw against Uruguay, even with the dangerous Mexicans looming in match three.

Copa América is a tournament that always features surprises.

Whether it’s the plucky Paraguayans, or the persistent Peruvians, one of the sides not favored usually makes a run.

While the draw wasn’t kind to Venezuela, perhaps they’ll be the side to surprise in this edition.

Alejandro Guerra, the 30-year old midfielder, has been on top form for his club Atlético Nacional.

Salomón Rondón is strong enough to battle with even the biggest of defenses, and the Internacional bound Luis Seijas showed his playmaking talent on the pitch Sunday.

It won’t be easy for Venezuela to escape Group C, but they’ve taken a massive first step towards doing that with their win Sunday.

Regardless of their result against Uruguay, Venezuela will have a chance to play for their fate against Mexico in their final match. However, just a draw in Philadelphia on Thursday night puts Venezuela in the driver’s seat going forward.

This isn’t the typical CONMEBOL punching bag, no, this is a Venezuelan side that believes in themselves, and know they’re 3 points closer to advancing.