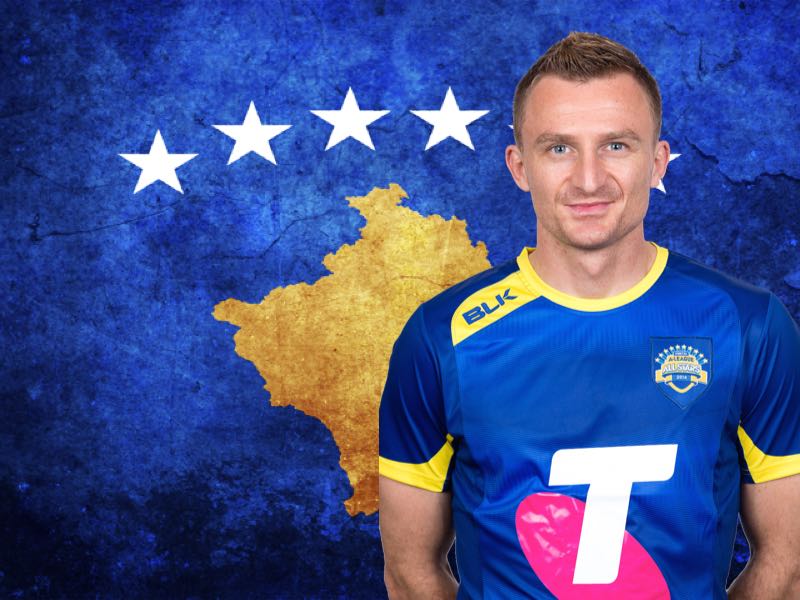 Football’s angriest footballer may have found a permanent place to call home. But if you think that becoming an Australian citizen will suddenly give Melbourne Victory’s Besart Berisha a Zen like calmness then think again.

His application which was made late last year and will be hopefully confirmed later this year, will help Victory as it will mean that Berisha will no longer be counted as one of their five overseas players making it easier to sign the likes of Ghanaian Michael Essien and Italy’s Alessandro Diamante both of whom they have come close to signing in the recent past.

For Berisha becoming an Australian is far more than a favour to his current club; “I am here five years now and I really enjoy every moment since day one…I would love to be an Aussie, I enjoy myself here and this is the most important thing”. Having lived in Australia for the required five years, it is hoped that citizenship will be a formality. For one of world football’s great nomads, to finally be able to have a place to call home will be a great relief to the 31-year-old.

As a refugee Berisha found life tough in Germany

Born in Pristina, now of Kosovo but then was part of the Former Yugoslavia, Berisha and his parents fled to Germany during the wars which tore apart the Balkans and Berisha found life tough as his family lived in a one bedroom apartment in amongst the urban sprawl of East Berlin’s former Communist housing projects.

His parents struggled with the language barrier and subsequently finding work too; “it was really tough in the beginning, horrible” he later recalled. His one solace was football. Skipping classes at school Berisha would retrieve his treasured football which was hidden from view in a bush located between his home and school. It wasn’t long before his physicality and his natural talent were being noticed by his peers and also local club coaches too. One coach was able to offer the teenage Berisha $50 a month to play, a sum which made a huge difference to his family’s quality of life. A 17-year-old Berisha played for Tasmania Berlin and won the youth league’s Golden Boot beating future German internationals Mario Gomez and Lukas Podolski to the price.

The hunger and drive which has pushed Berisha to huge levels of competitiveness and his will to succeed which sometimes pushes the boundaries (or more accurately, breaks massive holes in them), were developed during these formative years in East Berlin.

There was the very real possibility that Berisha and his family could be repatriated back to Kosovo, their only hope was a successful football career for young Besart and he knew it too; “I had one year to show myself, because back then, it was so tough for a non-German to play at a high level”. Berisha pushed himself to train and score in the matches he played, he needed a professional contract to protect his family’s status and found it in the form of Hamburg, a club that Berisha freely admits saved him.

Life at Hamburg was not easy for Berisha initially; he struggled to make their starting line up in his first season before being sent on loan to Danish Superliga team Aalborg, playing only three games without scoring.

He spent another season on loan in the Danish league this time with AC Horsens scoring 11 goals in 32 appearances before returning to Hamburg for the next season where he became the first Albanian to score in the Champions League.

A move to England ended in disappointment

Following the sacking of Hamburger SV head coach Thomas Doll Berisha struggled under new head coach Huub Stevens and he was transferred to Burnley in the English Championship for £340,000. He then snapped his cruciate ligament on international duty and his career stalled again.

It was for that reason that he failed to make an impact at Turf Moor at the start of the following season – a 20 minute cameo on a pre season tour to America just a day after flying into the country did not help – and Berisha was loaned to Rosenborg Trondheim in Norway where he scored three goals in eight appearances. Another loan move, this time back to Horsens ended after an altercation with a team mate.

This time there was no way back for Berisha at Burnley and they cut their losses selling him for just £75,000 to German club Arminia Bielefeld where he scored just two goals in 28 appearances. Berisha was now reaching the nadir of his career. He was in his mid 20’s and including loans he had played for eight clubs without being able to show his true potential.

In 2011 he signed for Brisbane Roar in the Australian A-League, and it was here that his true talent, as well as his temper, began to express themselves. He scored 21 goals in his first season as the Roar beat Perth Glory in the Grand Final, a match where Berisha scored both goals in a 2-1 win; “I love football so much, like never before. I’m scoring and scoring, I’m so happy that I’ve made this move” he said after the match. His fortunes continued to improve as the Roar won the 2014 Grand Final with Berisha scoring the first in a 2-1 win over Western Sydney Wanderers.

There were even comparisons to Zlatan Ibrahimovic, which Berisha himself was obviously happy with. Both players were sons of migrants who found football a release in difficult circumstances; “tough neighbourhoods. It’s not easy to break out of them and the best opportunity for Zlatan and me was sport”. Berisha went on in the same interview to state that knowing where they had both come from, they had the hunger that others didn’t to improve their family’s prospects and ensure that they wouldn’t ever go back to.

Unfortunately his temper still got the better of him at times. He was suspended for the Roar for offering the opportunity to Sydney FC’s defender Pascal Bosschart to settle their differences the traditional way in the tunnel post match. At the final whistle a now bare chested Berisha, with his skunk mowhawk haircut, ran past Bosschart grabbing his right arm before running off to the tunnel. Berisha was continually turning around gesturing for Bosschart to follow him; the resulting melee did not look good for either team.

Not content with falling out with the opposition, Berisha has also fallen out with his own teammates again. In one game, Berisha rather than play the simple pass to his colleague, the Canadian international Issey Nakajima-Farran, tried something more elaborate resulting in a confrontation between the two. At the time he felt the need to justify his actions “in Germany and Europe you grow up like this – you must be strong”, though following his confrontation with Nakijima-Farran he appeared to have mellowed; “I have to be professional, mistakes like this are not good anymore”

That is not to say that he will take any affronts lying down. In the recent Melbourne Derby (Berisha signed for Melbourne Victory in 2014) he confronted the Melbourne City keeper Dean Bouzanis after the stopper called Berisha a “fucking Gypsy”. Berisha then celebrated a hotly disputed winning goal immediately in front of Bouzanis.

So the nomadic wanderings of Albania’s angriest centre forward maybe coming to a close, he is at his tenth club and in his fifth country of his career. Despite applying for Australian citizenship, however, Berisha has declared an interest in playing for the fledgling Kosovan national team. For the restless striker, there may be one more significant move still ahead.