Premier League Roundup: Son Shines but is the Title Race Over? 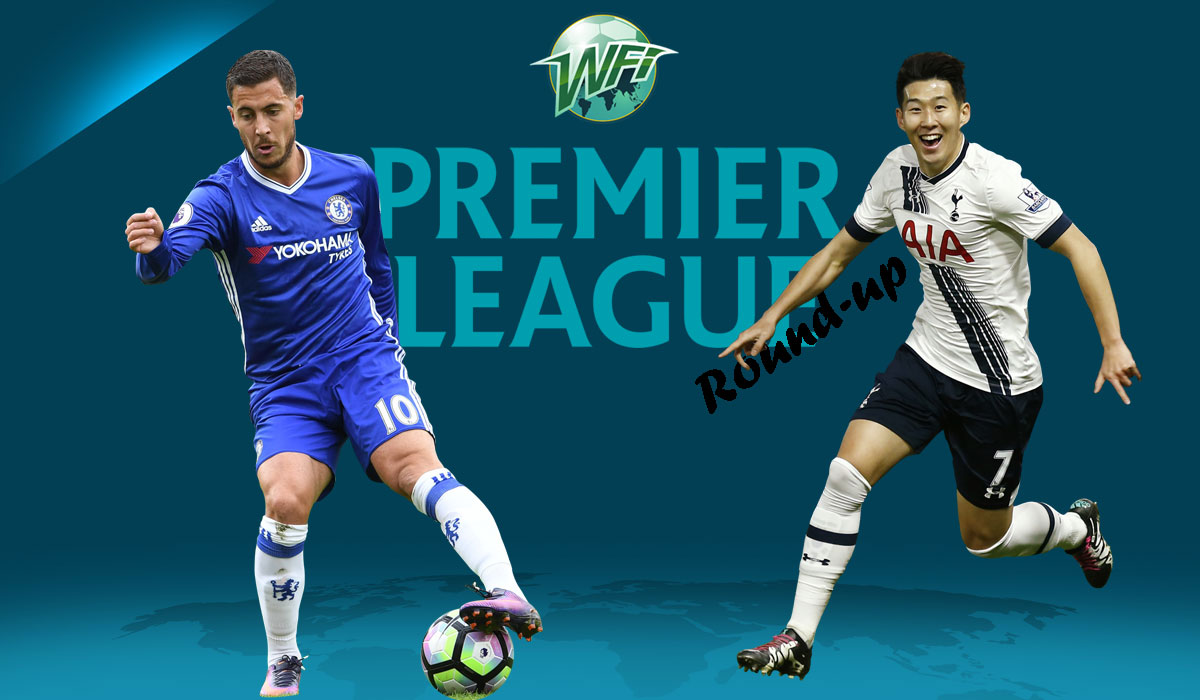 This, more than any other Matchday this season, will be remembered as the one where dreams went to die.

Dreams of a title race quashed, after Chelsea eased past a spirited Bournemouth at the aptyly-named Vitality Stadium.

Diego Costa’s fortunate scythe was followed quickly by yet another goal from a revitalised Eden Hazard, whose Belgian teammate Thibaut Courtois will be disappointed to lose a coveted clean sheet.

It was the only blot on an otherwise perfect afternoon for Chelsea fans, who can start their party planning for a title procession come May.  This was Bournemouth’s first defeat in six, and barring a complete meltdown, they’ll be safe.

Which is more than can be said for Sunderland, who looked beaten even before Zlatan Ibrahimovic curled a strike past Jordan Pickford on the half hour mark on Sunday.

When his compatriot Seb Larsson was sent off before half-time, the writing was on the wall.  Henrikh Mkhitaryan added a second less than a minute after the restart, before the much-hyped Marcus Rashford scored his first league goal in seven months.  Sunderland, without a goal in almost 12 hours of football, are gone.

Whilst Chelsea were busy trotting along on the South Coast, Tottenham were doing their level best to keep hopes of a title jaunt alive.  Pochettino’s machine continued it’s march, thrashing Watford 4-0 courtesy of a brace from Son-Heung Min.

In truth, by the time the Korean netted his second the Hornets were already buried, a sumptuous strike from Delle Alli bookended by Eric Dier’s effort.  The title may be beyond their grasp, but Spurs fans can at least be confident that there will be no repeat of the infamous ‘St. Totteringham’s’ Day’ this year.  Tottenham are now a whopping fourteen points ahead of Arsenal, who face a tricky game against Crystal Palace on Monday night.

Perhaps the biggest shock of the weekend came in Stoke, with Liverpool having one of those days that reminds their fans of what they might be capable of, if only they were consistent.  Stoke, inspired by the whip-smart Xherdan Shaqiri and Marko Arnautovic, took a deserved lead through silver fox John Walters just before half time.

Two substitutions changed the game, with Ben Woodburn and Trent Alexander Arnold sacrificed at half time for Coutinho and Firmino.  Mark Hughes’ side were powerless against the Brazilian backlash, the latter’s cracking volley sailing over Lee Grant’s head to secure a vital three points in Liverpool’s quest for the Champions League places.

They’ll face stiff competition from Everton, who had Romelu Lukaku to thank for their 4-2 powerhosing of Leicester City.  The dream was bound to finish sooner or later for Craig Shakespeare, who had contrived to win his first five fixtures as Foxes boss, but his side were powerless against the best striker in the league just now.

Lukaku is now four goals clear of Harry Kane at the top of the scoring charts, and Everton, who have on their last seven home games on the bounce, are level on points with a nervous-looking Arsenal.

Manchester City can’t get too comfortable either, as their leaky defence conceded yet again despite a routine win against Hull at the Etihad.

Pep Guardiola hadn’t won a Premier League game since 5th March against whipping boys Sunderland, and so would have been grateful for Ahmed Elmohamady’s charitable own goal on 31 minutes.

Sergio Aguero then did what he does best, netting tidily past Eldin Jakupovic, before Fabian Delph scored his first goal in over a year and City’s third.

Not that Hull will mind too much, their blushes saved by West Ham’s crucial victory against relegation rivals Swansea.  Slaven Bilic rumoured to be fighting for his job after West Ham’s recent collapse in form, could barely contain his delight as Cheikou Kouyaté buried any rumours of a P45 on the half-time mark.

It may just be a stay of execution for the Croatian, but the damage may be more permanent for Paul Clement. The victory sees Swansea mired in the drop zone, four points in front of Middesbrough and having played a game more.

The Teesiders played out a dusty 0-0 draw against Burnley at the Riverside, which suits the visitors more readily, sitting pretty as they are in 12th place.  Sean Dyche, one of the league’s most underrated managers, has done a fantastic job.

Burnley now sit level on points with West Brom, who are in an alarming slump of form.  The rot continued against Claude Puel’s Southampton on Saturday, Jordy Clasie’s 25th minute strike proving the difference.

Man of the Week

Luke Shaw has been through a lot in the past year.  As though a horrible leg break wasn’t enough, José Mourinho saw fit to publicly excoriate the left back in recent days, questioning his application and ability in the most ruthless manner.

Shaw responded in the best way possible, putting in a man of the match performance against Sunderland and putting two fingers up to the monotone Portuguese.  Mourinho, of course, will claim it as a motivational technique – either way, Shaw was sensational at the weekend.  Hats off.