Restructuring Milan: Who to Keep, Who to Sell & Who to Buy 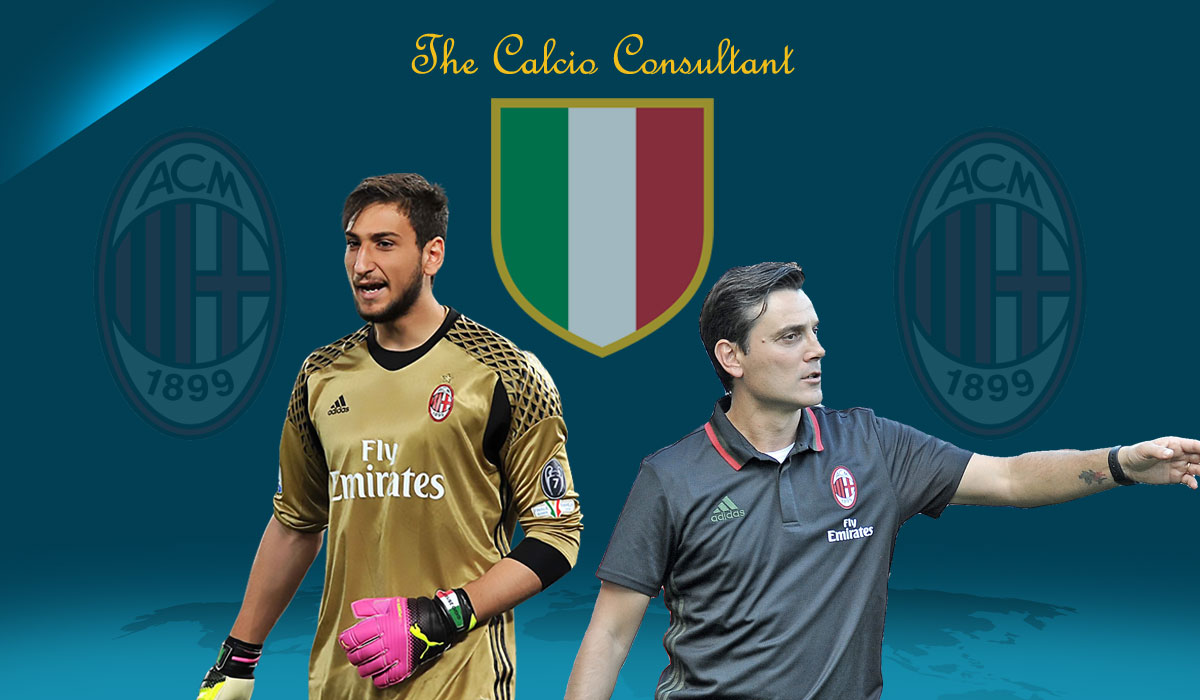 In his first column WFI’s Calcio Consultant Frank Crivello assesses the AC Milan squad and looks at potential signings for the club this summer.

I’m not much for cheesy introductions. You’ll learn about me as I blog and offer my opinion on various topics regarding the Italian game.

I’m the host of Serie A Sitdown on World Football Index, and have been a faithful Milan supporter for 30 years. Yep, pretty much since Silvio Berlusconi took ownership of the Rossoneri.

I’ve suffered the last several years as have all Milanisti, a decade of gradual decline from Kings of Europe to flirting with football obscurity. The recent 4-1 battering taken at home to Roma is all the evidence one needs.

The 2016-2017 version of AC Milan has been akin to drinking coffee; sure you’re bouncing with enthusiasm and get spurts of energy, but the crash is inevitably coming.

The squad is one that obviously has been watered down, basically in preparation for a change in ownership.

Yonghong Li and Rossoneri Sport Luxembourg have taken over, and have big plans to bring AC Milan to the forefront of World Football again.

All new owners say that though, don’t they? They clearly won’t be able to overhaul 20-25 players in the summer to help make this happen, much to the chagrin of Milan supporters who think that can actually happen.

So I’m here to help Mr Li, Mr Marco Fassone, and Mr Massimo Mirabelli. Let’s start with the current squad, who stays and who should move.

The new owners need a face of the team. Much like Paolo Maldini had been the face of Milan throughout most of Berlusconi’s regime.

Donnarumma should be the face of this one, and there just isn’t another option.

Priority one for Fassone and co is to lock the wonderkid up for several years and have an expensive out clause. That’s the obvious part.

Plizzari is another teenager brought up through the Milan youth system, loan him out and get him experience.

Marco Storari is 40, and my most vivid memory of him as a Milan ‘keeper was the 4-0 beating he took in the Derby to Inter in 2009. That, and the awful first half campaign for Cagliari this season. His contract expires at the end of June, but keep him on for another year as the third choice.

If you’re going to have a third choice, no shame in having someone who can mentor Donnarumma on the professional aspects of being a goalkeeper (just don’t show him tape of that 2009 Derby or any of his time at Cagliari).

Bring Gabriel back from his loan spell at Cagliari and have him be the number two next season.

Donnarumma is the guy, and only an injury (heaven forbid) is going to keep him out.

Move on: from Gabriel Paletta and Christian Zapata.

Abate and Anotnelli have been long-term injury casualties this season, but are veteran players who can come in and spot start here and there.

Full back needs an upgrade, but a lot of teams will be saying that. Where is De Sciglio’s head? Does he really want to move?

The fact he’s been captain in some games are signs that Milan trust the leader he is becoming. If there is money to spend this summer, De Sciglio can be the starting right back and a left back will be purchased.

Gustavo Gomez is raw, and needs time to adapt to the Italian game, a little unfair to write him off after one season.

Same with Vangioni, who when given the chance started great but since has been putrid (recent performance against Roma will be most forgettable).

These are reserves that should get one more season to prove themselves. Alessio Romagnoli has shown this season he is a rising star and, with Donnarumma, part of the foundation for the new Milan.

Calabria is just not ready yet, Ivan Perisic toyed with him in the most recent Derby. Let him get games somewhere else.

Gabriel Paletta has proven time and again that he is a red card waiting to happen. Milan should move on from him, but will probably have to keep him as he has one more year left on his current deal and no one will want him.

For the sake of this blog, I’m wishing they’ll release him.

As for Zapata, he relies on his pace to make up for his lack of positioning, and now that he’s on the wrong side of 30 that pace won’t be there much longer.

He’s got two more years on his contract, a promoted side in Serie A or another league would be willing to gamble on him. If an offer comes, make the move.

Bertolacci showed his talent at Genoa before arriving at Milan and injuries have played a part in keeping him out. Milan spent on him, so I think he’ll get the chance to prove himself.

Bonaventura has proven his quality since arriving from Atalanta, his injury has certainly played a part in Milan’s stagnancy down the stretch this season.

Manuel Locatelli is one for the future, has played well when given the chance, and puzzles me why he’s not been getting a run out of late.

I have been a big critic of Montolivo (most Milanisti have), but events since his injury show the respect he has from his peers as captain. He could be the new Massimo Ambrosini in which he is captain by title but a squad rotation player when it comes to team selection.

I thought I read that Milan don’t plan to keep their loanees. If they keep one it should be Pasalic. He gets the yips in big games but he’s also only 22 and the talent is there for him to be a key player.

Poli is a squad guy who gives his all when given the chance. He has one year left on his contract anyway so keep him on as a rotation player, and move on from him next year.

Sosa is another veteran who has put in some decent performances, but another that is in no way a regular first teamer at this stage of his career. Not where Milan want to go. Don’t need to move on from him, but let him play out the final year of his deal.

Fernandez is a loan signing and has spent more time on the treatment table than on the pitch. He’s not worth having long term.

Honda never worked out, his contract is up at the end of this season, and there’s talk of him going to MLS anyway.

Kucka is decent box to box guy, but also 30 and has a habit of being a bit reckless. He has two years left on his contract, and a middling to relegation-fighting top flight team may be willing to take a chance on him.

Move on: from Carlos Bacca, Gerard Deulofeu, and Lucas Ocampos.

This may be the section where I get some flack, so what, it’s my blog!

Lapadula was brought in this season and his results, cult figure or not, have been mixed. With a couple of the names being bounced about for striker at Milan, he can be a rotation player and a useful one.

Suso has been consistent as he goes, the Milan attack goes. He’s starting to prove the quality that attracted him to the likes of Liverpool as a youth player.

Out of the six attackers in the current team, these are the only two I would keep.

Cutrone is a product of the Milan youth system and could afford to get experience elsewhere.

Bacca has been pretty good for Milan overall, but in recent games he looks like he’s running in cement boots.

Striker is a glaring need for this Milan team, especially considering all the teams at the top with players who are in the thick of this season’s Capocannoniere race.

Does Bacca want to stay? Will he be forced out? He’s 31 and has three years left on his contract, not sure who would want to buy that out.

Deulofeu started his loan spell brightly but honestly, he has tapered off. He’s all dribbling and pace, not much beyond that.

Ocampos has a lot to give yet as he is only 22, but that has been said about him since he was at Monaco.

Deulofeu and Ocampos are both on loan, and I don’t see either staying beyond their spell.

Okay, so 10 new players after doing all of this, replacing 7 permanent and 3 loaned out.

Goalkeeper is easy, if Plizzari is to be loaned out then Gabriel can return from his loan and be the number two. Better than having him rot the bench at Cagliari.

After that, two other players on loan could rejoin the team next season.

First is Gianmarco Zigoni, a forward who is having a successful loan spell at Spal, scoring 9 times in 34 appearances. With so many attacking players being linked, Zigoni can be relied on for squad depth.

Also for depth, Jose Mauri can be recalled and kept. He’s a young midfielder who has only made 14 appearances on loan with Empoli.

That means Milan will have to buy at least seven players.

Here would be seven players to add to the team. Each have been linked in some shape, form or fashion:

Other names that have been tossed around are Pierre Emerick-Aubameyang, Nikola Kalinic, and Keita Balde.

Any of them would be improvements to the attack as well, but it appears Mirabelli, Fassone, and co have their sights set on some of the players above.

This would create a Milan that can being taking the steps toward being among the best on the continent. But what about…

Montella was tasked with taking a patched together team and getting it to overachieve.

With three Serie A games remaining at the time of writing, he is achieving the objective of reaching next season’s Europa League.

He has done wonders with what he has at his disposal, as he has wherever he’s gone. Whether Milan see out 6th or not, Montella has earned the opportunity to work with a strengthened squad.

This would be a reasonable restructuring of Milan without completely overhauling the squad.

It would be a Milan squad deep enough and good enough to handle the workload of competing in Serie A, Coppa Italia, and Europa League.

Maybe, just maybe, the genesis of a new period of greatness at Milanello.