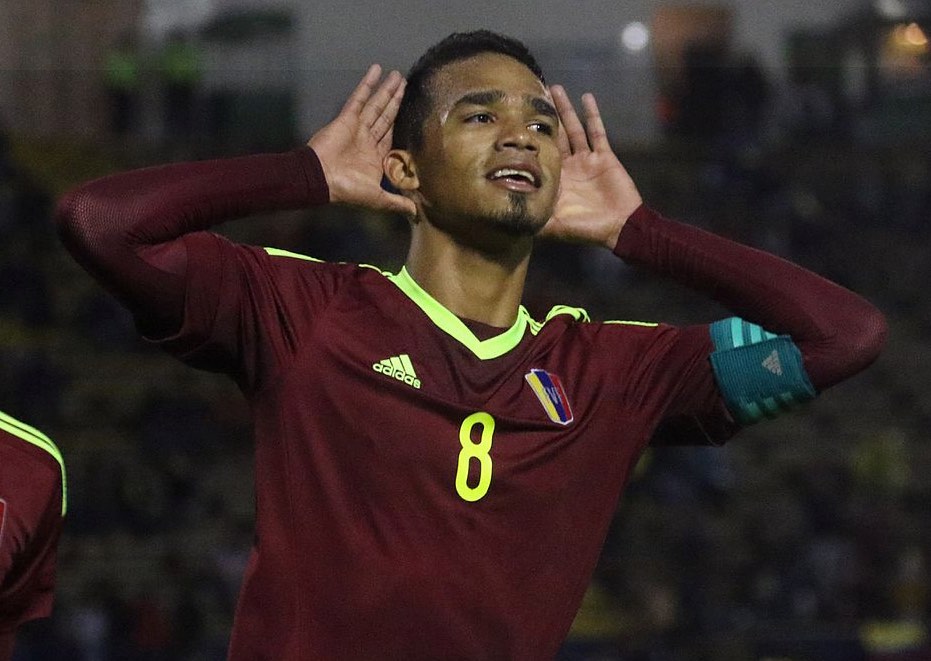 At the recent U20 World Cup in South Korea, Yangel Herrera was awarded the Bronze Ball as the third best player at the tournament. He helped Venezuela all the way to the final where they eventually came unstuck against the tournament’s surprise package, England.

The individual gong was testament to his displays throughout the competition where he managed one goal and caught the eye throughout.

But if fans were eyeing him up as a potential transfer target for their team, they might have been surprised to find that he’s already been snapped up by an English Premier League side.

Herrera is on the books at Manchester City, having signed for the club in January 2017. He was immediately loaned to one of the City Football Group’s feeder clubs, New York City FC, and has so far made several starts and a few appearances from the bench since joining the MLS side.

The 19-year-old is a box-to-box midfielder who can do a bit of everything, using his energy and drive to cover a lot of ground in the centre of the park, and his skill on the ball to make things happen when his team are in possession.

He regularly lines up in what initially looks like a double pivot at the base of midfield, often alongside Alexander Ring, but Herrera ends up playing a much freer role between the boxes down the right channel.

NYCFC are currently coached by Patrick Vieira, which is another bonus for the young Venezuelan.

Learning his trade from one of the best central midfield players of all time will serve him well in the future, and Vieira can teach him all about the Premier League, readying him for a return to Manchester in the coming years.

Football isn’t the most popular sport in Venezuela, as baseball is still ahead in the nation’s sporting mindset, but more success at youth and senior international level could see it begin to rival baseball as their national game.

Unfortunately, the Venezuelan senior side are rooted to the bottom of the South American qualifying section for the 2018 World Cup, so it’s evident that they still have work to do.

Producing more players like Herrera, whose parents initially wanted him to take up baseball, will go some way to changing their football fortunes.

Vieira has commented on the importance of spotting him prior to the U20 World Cup, as they knew his stock would rise during the tournament.

“That showed how our scouting department works, because if we were trying to get him after the World Cup, it would be too late,” Vieira said, “because he did really well. He was one of the best, if not the best player of the tournament.

“Then he started to feel comfortable and now he’s playing fantastically well for us. He’s an important part of our team and I’m glad that he’s doing well. I still believe there is more to come from him.”

He has a powerful right-footed shot, but his one goal at the U20 World Cup came from a total of 18 shots, so if there’s an area he needs to improve on, it’s his output in terms of goals and assists.

His strength and athletic ability make him a good presser of the ball, and he also has the mental drive to play in this style.

He’s also good at anticipating opposition passes, which means he’s good at winning the ball back in midfield and turning defence into attack in an instant.

This means he would be good for counter-attacking sides as well as possession based teams, and with the speed Manchester City have on their wings, you could see him releasing one of Sterling or Sane having won the ball back in midfield, should he ever don the sky blue shirt in Manchester.

World Football Index spoke to Venezuelan football expert Darren Spherical to get his thoughts on the player.

“Of all the youthful, outfield Venezuelans, Herrera is the best placed to become a consistent starter for the senior national side.

“He exudes significant poise and morale-lifting composure on the ball, regularly winning it from opponents and, particularly at Under-20 level, playing a leading role in organising the well-drilled defence.

“He can also be rather dynamic, often kick-starting attacks as well as shooting from range and getting on the end of set-pieces. It’s no wonder that he’s helped to largely resign Andrea Pirlo to the bench at club level, where he is already a regular.”

In a recent game against Chicago fire he showed the other side of his game — his temper.

Within the space of five minutes he was booked, denied a (clear) penalty, and then booked again. As he trudged to the sidelines the commentators spoke of a fiery disposition, a hotheadedness; indeed, he’s been a regular collector of yellow cards throughout his career.

While this can sometimes be a weakness, the way he plays the game means his name will often find its way into the referee’s book. He just needs to find a way to commit more clever fouls and fewer senseless ones, which again is something Vieira could help him with.

While it will be difficult for him to break into the Manchester City side, those who’ve watched him in MLS in recent months believe he has the talent to do so.

The more I see of Yangel Herrera, the more I like, but I fear ManCity could call him back on loan when EPL season starts #NYCFC #VANvNYC

Whether Herrera makes in the Premier League or not, he seems certain to be a big part of the Venezuelan national team in the coming years, and maybe he could even help them qualify for their first ever World Cup.