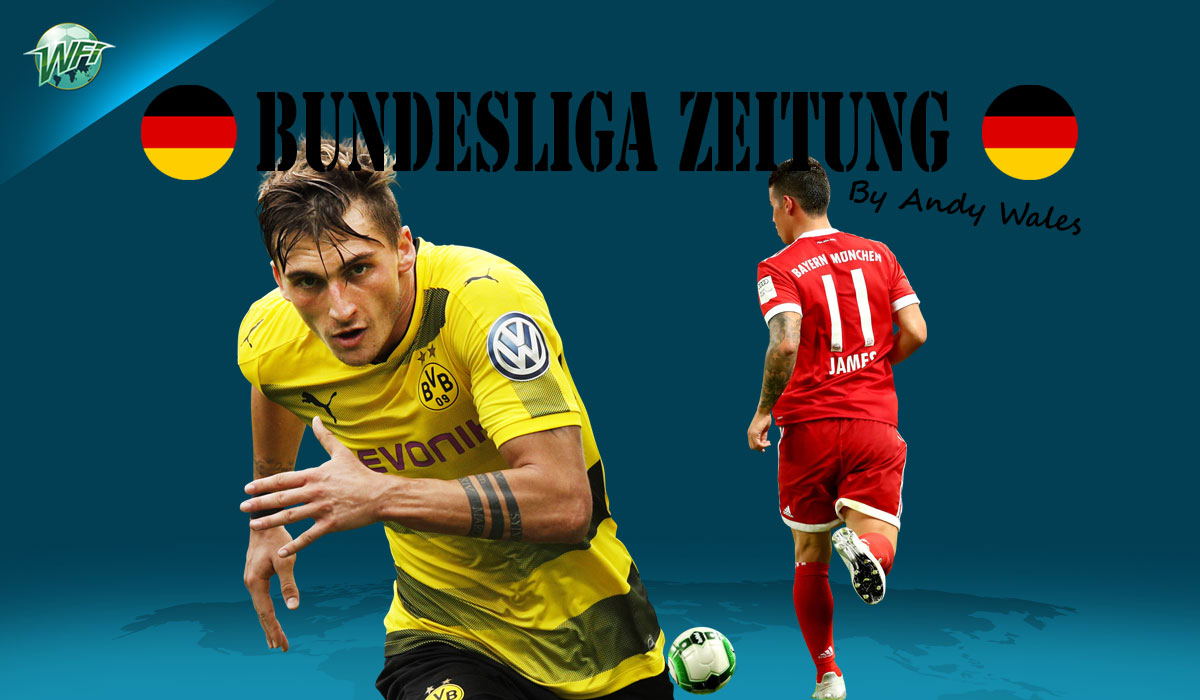 So, this past week’s Bundesliga action was a double-header, thanks to the colloquial “Englische Woche” (writes Andy Wales).

Prior to Tuesday night’s matches, it was announced that Bayern Munich goalkeeper Manuel Neuer had again broken his foot and is expected to be out until the New Year – news that apparently had Bayern president Uli Hoeness criticising the club’s doctor Volker Braun.

But, whilst rumours of unrest behind the scenes at Bayern continue to circulate, there were no such issues on the pitch when they travelled to Gelsenkirchen.

On paper, Schalke looked a stern test for the Champions after a run of three successive Bundesliga victories, especially with Bayern unable to call upon the services of the world’s best goalkeeper.

However, paper did not translate to the pitch, and once Bayern took a foothold in the game, there was no looking back. Robert Lewandowski got his obligatory goal, and shortly afterwards, it was added to by James Rodriguez – his first in the Bundesliga. A third from Arturo Vidal, late in the game, sealed the win for Bayern, and it seemed rumours of their demise had been greatly exaggerated.

Just a few days later, Bayern hosted struggling Wolfsburg for the Friday night football, and you could be forgiven if you feared for the visitors at the Allianz.

With a two goal half-time lead, courtesy of Arjen Robben and that man Lewandowski again, it appeared those fears were coming to fruition. Instead, the game was far from over, as Max Arnold cut the deficit early in the second half and, incredibly, Daniel Didavi grabbed a late equaliser. It finished 2-2, and although the word “crisis” seems overly dramatic at this point, the murmurings of discontent have resurfaced.

“Is Bayern drawing at home that big of a deal?” you may ask. Well, actually, Bayern surrendering a two goal lead at home is just something this Bayern side normally does.

If it was a result in isolation, perhaps it would not be so significant, but in the context of a season where Bayern have too often flattered to deceive, the knives are being sharpened. Next week, Bayern face the difficult trip to the capital to face Hertha Berlin; coupled with the mid-week Champions League tie away at PSG, it could be a defining time ahead for Carlo Ancelotti.

Again, that may seem a dramatic comment to make in late September, with Bayern a mere three points off the top of the Bundesliga, and having won their opening Champions League fixture with relative ease, but all is not well with “FC Hollywood”, and a couple more disappointing results in quick succession could be the catalyst for things to really unravel at the Allianz.

.@Manuel_Neuer is set to miss the rest of 2017 after suffering another fracture in his left foot.

Meanwhile, in the early race for the title, Borussia Dortmund continued their momentum by brushing aside Hamburg on Wednesday night. Goals from Shinji Kagawa, Pierre-Emerick Aubameyang and Christian Pulisic capped an impressive 3-0 away win, but that was only a prelude to the Saturday evening demolition of Borussia Mönchengladbach. In fact, annihilation is probably a more accurate description of what happened at the Westfalen as Dortmund ran riot over a hapless Gladbach.

A first half brace from the impressive Max Philipp was followed by a quickfire second half hat-trick from Aubameyang and a sixth from the returning Julian Weigl, but it’s perhaps testament to the current mindset of Dortmund under new boss Peter Bosz that the players were furious when they conceded a late Lars Stindl consolation goal.

Could we be seeing a power shift in the Bundesliga? With Bayern stumbling and Dortmund in full flow, perhaps we are in the process of the vice-like grip of the Bundesliga title loosening from the Bavarians and it returning to North Rhein Westfalia for the first time since 2012. However, we are still only the very early stages of the season, so it would still take a brave person to write off a squad as good and successful as Bayern’s, regardless of the rumours currently surrounding them.


At the other end of the table, FC Köln coach Peter Stöger last season guided the club into European football, for the first time in 25 years. This record of success and continual improvement followed on from Stöger guiding Köln to the 2. Bundesliga title in his first season and then firmly re-establishing them in the top flight.

Just five years ago, Köln were relegated with significant debts, so the turnaround under Stöger should not be underestimated, and has rightly brought him love and respect from all associated with the club.

The trouble is just how stark the contrast has been this season; the 1-0 defeat at home to Eintracht Franfurt on Wednesday night left the Billy Goats rock bottom, without a single point to their name.

A tough goalless draw in Hannover on Sunday brought them their first point of the season and may prove to be a positive platform from which to build on, but with RB Leipzig their opponents this weekend, life is unlikely to get any more comfortable, and Köln could soon have to face a previously unthinkable question with the position of Stöger.

With the intriguing prospect of the ‘Nord derby’ between Hamburger SV and Werder Bremen to also look forward to on Saturday evening, this weekend promises to be another interesting chapter in the ongoing stories at the top and bottom of the Bundesliga.