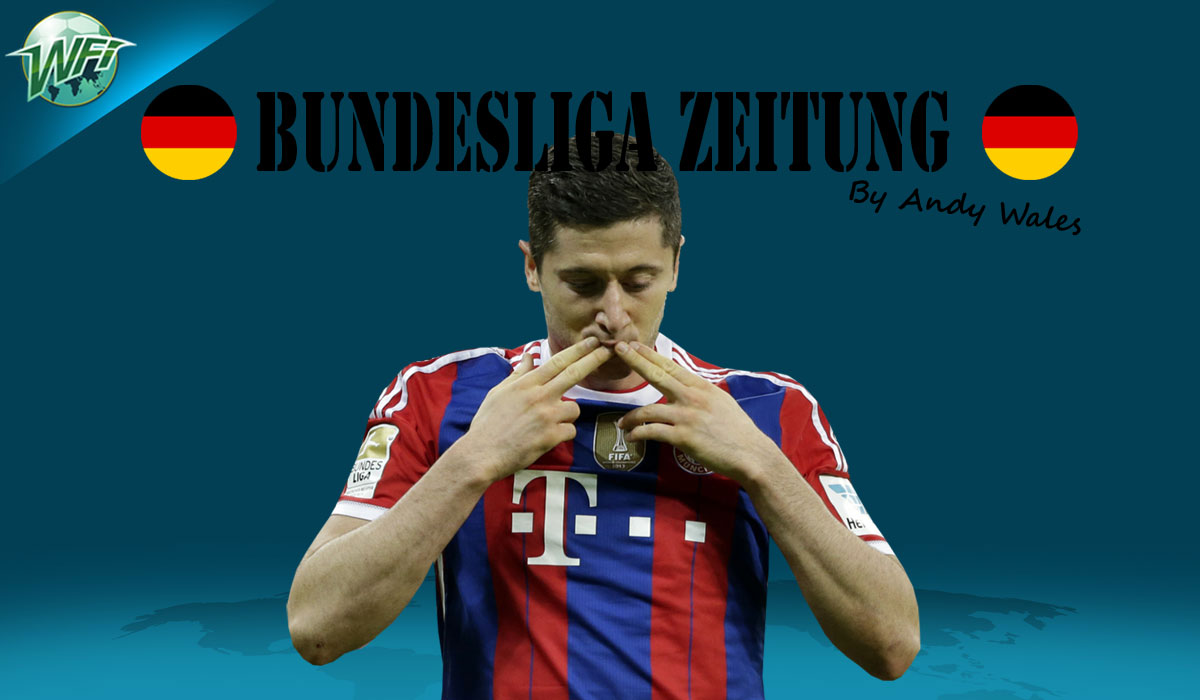 It’s been a busy week of European football for the Bundesliga which has gleaned mixed fortunes (writes Andy Wales).

Bayern bounced back from domestic disappointment with a comfortable 3-0 win over Anderlecht. Dortmund were left to rue a wrongly chalked off Aubameyang equalising goal as they ended up losing 3-1 to Tottenham Hotspur at Wembley. Meanwhile, RB Leipzig made their debut in the tournament with a very respectable 1-1 draw with AS Monaco.

In the Europa League, attention focused on Köln’s trip to Arsenal, or more accurately, the focus was on the approximately 20,000 Köln supporters who made the trip to London.

It was the club’s first match in Europe for 25 years, and the passionate support of their fans was, in the most, a sight to behold, as they literally sang their way to the Emirates stadium.

Sadly, a few unsavoury incidents and the sheer number of Köln fans without tickets outside the stadium led to the kick off being delayed by an hour.

The Cologne @fckoeln_en fans brought a little bit of central London to a standstill on their way to the Emirates earlier! #uel #arskoe pic.twitter.com/8Dp2HBWq12

On the pitch, the night started well, but ultimately ended in disappointment, with a 3-1 defeat.

There was disappointment too for Hoffenheim, who surprisingly lost 2-1 at home to Sporting Braga, but Hertha Berlin recorded a credible goalless draw against Athletic Bilbao.

Bayern have been in the news in Germany this past week and not just because of their defeat last weekend to Hoffenheim. Club legend and CEO Karl Heinz Rummenigge criticised Robert Lewandowski and his agent for comments the player made in the press in regards to Bayern’s transfer activity over the summer.

Robert Lewandowski celebrates his 81st goal for #FCBayern in the Bundesliga

The public unrest has continued, with persistent rumours around Carlo Ancelotti’s position as Head Coach, including suggestions that he will be moving to the Chinese League, and that Hoffenheim’s Julian Nagelsmann is being lined up to replace him.

Back on the pitch, Bayern followed up their Champions League victory with an impressive 4-0 win over Mainz that saw Lewandowski do what he does best: score goals. In fact, he got two to make it an incredible 82 goals in 100 Bundesliga games for Bayern. Crisis? What crisis?

The Friday night match once again starred Hamburger SV, but their great start to the season is becoming a distant memory as they went down 2-0 at Hannover, a result that saw the hosts go top of the Bundesliga. They held on to top spot until the final game of the weekend, when Borussia Dortmund brushed aside Köln.

Last week, I wondered if Köln, set up to frustrate, might be a tough test for Dortmund, but an early goal put paid to any game plan Köln had. We again saw VAR involved in key decisions, awarding Dortmund a second goal just before half time and awarding a penalty for Aubameyang to make it 3-0. Within a minute, Aubameyang had another, and shortly afterwards Max Phillip hit the fifth to complete a comfortable victory for Dortmund and leave Köln rooted to the bottom of the Bundesliga on zero points.

This week is what is known as ‘Englischer woche’ in Germany – ‘English week’ – which, in other words, means there’s a full set of midweek Bundesliga fixtures. The stand out on Tuesday night is in-form Schalke 04 playing host to Bayern Munich, which is a big test for both sides. Can Schalke keep winning and throw the title race wide open? Or will Bayern follow up two successive wins with a third? It should be an intriguing contest.

Koln will hope to get their first points of the season at home to Eintracht Frankfurt, just 24 hours after fellow strugglers Werder Bremen travel to Wolfsburg. Leaders Dortmund head north to Hamburg, a fixture that’s not always been kind to the visitors in recent years, but it’s difficult to see Hamburg avoiding a third defeat on the bounce.

The quick turnaround of fixtures then takes us to Friday and Bayern with the seemingly regulation task of welcoming Wolfsburg to the Allianz Arena. Mo Dahoud will face former team mates in the Saturday evening match, with Mönchengladbach making the short journey to Dortmund, and after Gladbach got a good 2-2 draw at RB Leipzig, this one could be great for the neutrals.

Match week 6 ends with unpredictable Bayer Leverkusen at home to Hamburg. Both teams are currently mid-table, but these points could be vital later in the season, as both sides could easily get dragged into the relegation fight. However, as fragile as both can be, they should have enough to be safe, but their unpredictability is just a part of what makes the Bundesliga such an entertaining league to watch.