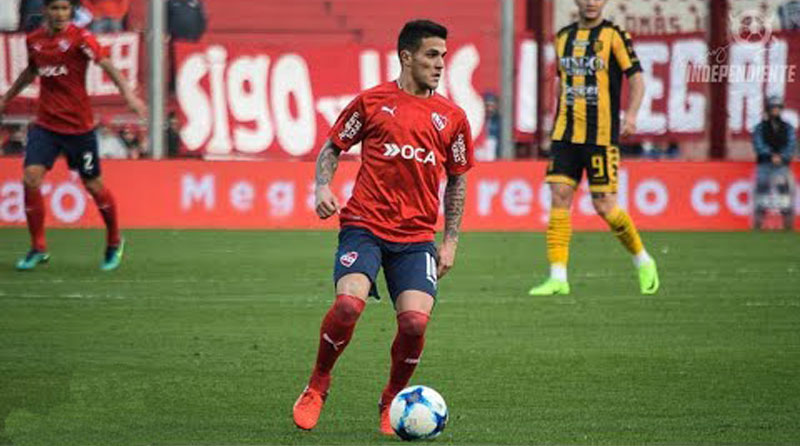 Who is Fabricio Bustos?

Fabricio Bustos is the latest talent to come from the footballing haven that is Argentina. This marauding fullback has a bright future ahead of him and in this article I analyse why. Bustos has played for Independiente for the entirety of his career after signing from Jorge Newberry at the age of 12. He progressed through the age ranks at the club until he was given his senior debut by Gabriel Milito in 2016. Since then, the promising youngster hasn’t looked back.

What is his style of play?

Bustos is very much an attacking full back; he is always looking for the overlap and trying to contribute with marauding runs forward. This can help the team create overloads down the flanks but it can also occasionally leave the right flank exposed and vulnerable to counter attacks. He loves dribbling with the ball to the flank and delivering crosses in, which are not always accurate, but nonetheless cause a lot of danger.

For all his attacking verve, Bustos is also very solid defensively: his pace is a massive asset when dealing with tricky wingers, allowing him to recover quickly if he has been caught out of position. He is a very good tackler and has a decent tactical understanding of the game.

The player I would liken him to the most is Hector Bellerin — a lot of pace and attacking ability, but he needs to work on his final ball. He is also a bit more defensively sound than Bellerin.

Bustos’s main strength is his pace, which helps in both the defensive and attacking phases of the game. He uses it to bomb forwards and hide some defensive frailties and mistakes. His dribbling ability is also akin to a tricky winger and not a full back, as he often goes on mazy runs, dribbling past many players at one time. This can be very helpful in evading pressure and this also helps him deliver more crosses.

He also has a good level of tactical understanding which helps him pick his moment to attack; he doesn’t go forward at every attack, instead analysing the situation and trying to make the right choice. Bustos is very lithe and agile with a low centre of gravity which helps him to evade players easily.

Bustos’s biggest weakness is his lack of strength. His body structure is very weak and this means that he loses out on a lot of duels. He is often shrugged off the ball by attackers and he very rarely triumphs physically against an opponent.

His attacking impetus also comes at a cost as he is sometimes caught out of position and this results in his team being susceptible to quick counter attacks which creates overloads for the opposition.

Also, like most Argentinian defenders, Bustos is hot-headed and he loses his head sometimes in the game, resulting in some very silly yellow cards which are mostly due to frustration. He needs to work on his final ball too which is sometimes wayward and can squander all his good approach play.

Bustos is a very promising youngster with a bright future ahead of him, if he keeps his discipline and continues progressing at the rate he is currently at. He has all the tools to become a world class attacking full back. I wouldn’t be surprised to see him at a top European club in a couple of years and he could finally be the man to fill Argentina’s right back void and end the eternal dilemma.