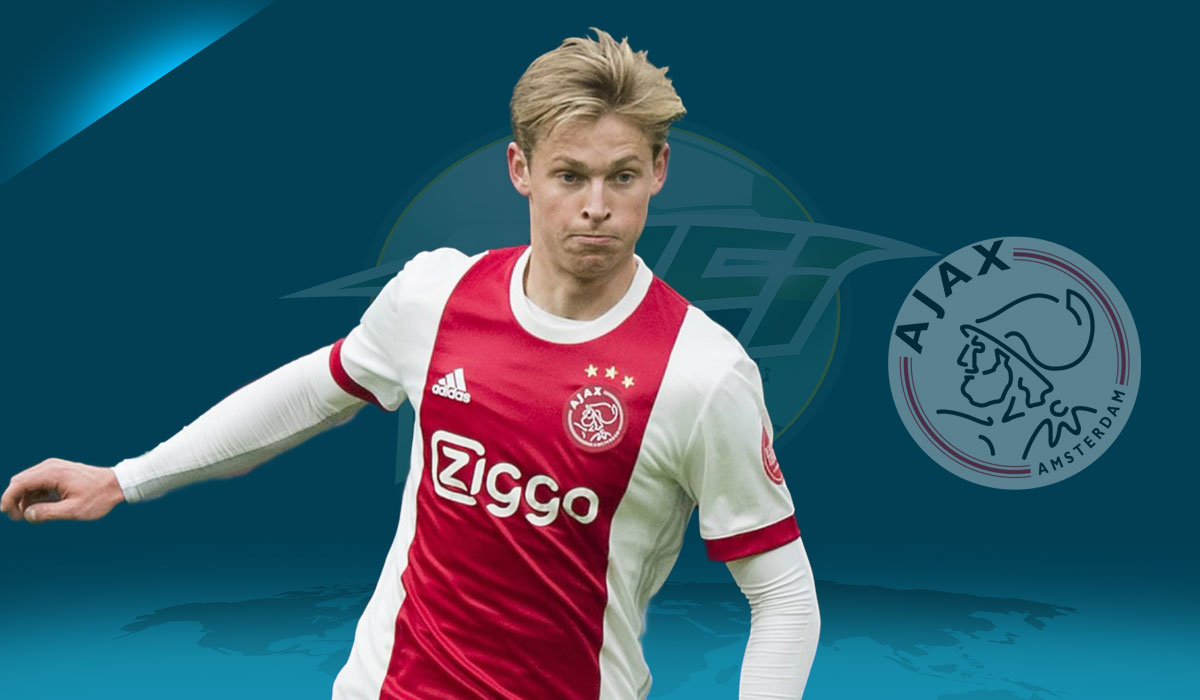 Frenkie De Jong has been turning heads recently — as one of Ajax’s biggest talents, he has been one of the brighter sparks in a shoddy collective effort this season, writes Rik Barendrecht.

In recent weeks, his leadership skills have helped turn games around, and his example on the pitch has shown the team that they still have the capacity to play well. That consistency and leadership, as well as his natural talent, is what makes De Jong the kind of player Ajax needs.

De Jong has been linked with various top-tier clubs in Europe, who are ready to pounce in light of his uncertain contractual situation; Ajax have offered him a new contract, but De Jong his holding out because he wants to be a more regular starter in the main squad. His current deal runs out in 2019.

Frenkie De Jong was born in the village of Arkel on May 12th 1997. A standout player in his youth, he was invited to join the Willem II academy. Some of the top clubs in Dutch football started noticing his talent, and a race to sign him started between PSV and Ajax.

In early 2015, it looked like PSV would win this race; news started to leak that he would be signing for them imminently, and that it was just a matter of time before he would be officially presented as a PSV player. Of course, that didn’t happen, and in August 2015, he instead signed for Ajax.

His ‘weird’ transfer to Ajax

De Jong thought that he would have a greater chance of playing games at Ajax than he would at PSV, which has turned out to be at least partially true. The Amsterdam club initially made a regular cash bid, but Willem II made an unconventional counter-offer: they wanted  Ajax youngsters Lesly de Sa, Richairo Zivkovic and Ruben Ligeon on loan, in addition to De Jong himself for the remainder of the season. Ajax agreed, and they controversially paid a single Euro to make his transfer official, after which the four players temporarily switched homes.

In truth, this turned out to be a better deal for Ajax than it was for Willem II, or indeed De Jong himself — he received hardly any playing time during his loan spell, and Ajax eventually recalled him before placing him in the (aptly named) Jong Ajax squad for the second half of the season.

If you have ever watched any of his games, you will certainly agree with this part — the way he can suddenly start a mazy run out of nowhere is one of his biggest strengths, aided by the fact he is very fast and agile, and the fact that the Eredivisie is full of wooden defenders who hate players running at them, which makes this attribute very useful to have, especially when it’s allied with his excellent acceleration.

De Jong doesn’t start those runs for the sake of it; he always seems to have an idea of what he’s going to do and when’s the best time to do it, all before he even touches the ball, which is a rare gift for a player of his age. As mentioned before, his leadership is also another obvious quality, which he’s smart enough to realise: as he advances up the pitch, you can see confidence it instils in his teammates, which in turn improves their overall play. This alone makes him one of the best midfielders that Ajax have to call upon, and in a few years, he’s bound to be among the best in the entire country

According to WhoScored?, in his twelve appearances so far in the Eredivisie this season – six of which have been starts – his passing accuracy stands at an average of 91.7%, which is superb for a player that doesn’t just keep it simple; he often goes long, which is one of his biggest strengths, and he often passes into or near the opposition third, which is naturally a more congested and risky area of the pitch.

At 180cm tall, De Jong isn’t the tallest, but his strength is improving game-on-game as he fills out and adapts to the rigours of competitive first-team football.

Also, his shooting really needs to improve — not that he’s bad,  but he’s still quite inconsistent, and his shots tend to lack power. For an attack-minded midfielder, it’s important to provide a goalscoring threat as well as an ability to find teammates, but this should improve over time.

I think that, by the end of the year, he will be a guaranteed starter, and as an Ajax fan, I hope he signs a new contract with the club. While I would love to see him under Guardiola’s tutelage, I expect that he will stay at Ajax for at least another season. In my eyes, Frenkie De Jong will be a player that could be one of the best Dutch midfielders of his generation, and I certainly think that he could reach the top of Europe.

Loading...
Newer Post
Where Manchester City vs Tottenham Will Be Won And Lost
Older Post
Scarpa Flows for Flu but Wonderkid Wendel is the Wanted Man