Bayern Munich March On To The Future – Bundesliga Zeitung 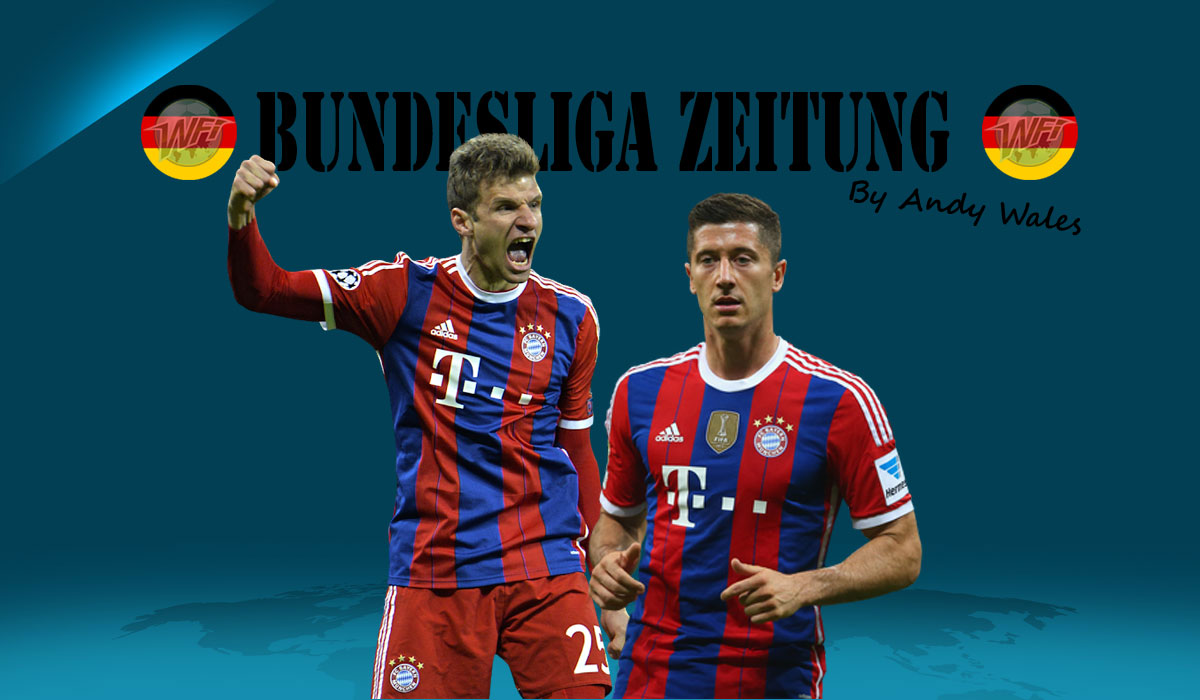 It seems almost inconceivable to suggest that the season is about to begin in earnest for a team in late February, but for Bayern, that is very much the case.

The reigning German champions are edging ever closer to a sixth successive Bundesliga crown after a difficult start to their campaign that saw the departure of Carlo Ancelotti.

Jupp Heynckes duly came out of retirement and seamlessly switched the club from free-fall to auto-pilot, cruising Bayern back to the top of the table before jetting off into the distance, writes Andy Wales.

Domestically, Bayern are a winning machine — a powerful, all-encompassing footballing institution. Quite how their iron grip on power will be loosened or even challenged is a question no Bundesliga club currently has an answer for.

It’s the Achilles heel of the Bundesliga as an overseas product, because everything else is there in abundance: skill, excitement, passion, atmosphere and drama, but competition for the title is an issue that holds the Bundesliga back in its marketability to the casual fan.

However, that’s not particularly Bayern’s problem, despite the fact that a more marketable Bundesliga would likely provide bigger revenue streams, but what club would want to find solutions to their opponents’ quests to break their strangehold?

I’m getting a little off track here, but there is relevance to all this, because as domestic dominance has arguably become a given, matching that with dominance in Europe has so far not materialised. Bayern last won the Champions League under Heynckes, and although Guardiola had them as semi-final regulars, Ancelotti was supposed to be the man to make them champions of Europe once more.

It’s not that winning the Bundesliga is not an achievement, but their dominance is such that it has become an expectation, and the bare minimum for a coach there. Much like for Barcelona and Real Madrid, the real measuring stick is not the domestic league title, it’s the Champions League.

Whether or not that is harsh on any coach at Bayern may be up for debate, but the fact is that it comes with the territory. A club of their current stature will be judged against the others amongst Europe’s elite, and that’s just the way it is. An incumbent coach at Bayern can expect to inherit a fantastic squad and likely win at least one trophy, but they must also expect immense pressure, and to be tested by the sheer scale of the club, its traditions, and its infrastructure.

Heynckes took that in his stride before his retirement and has done so again, to such an extent that reports in Germany are that the club are trying to convince the veteran coach to stay beyond this summer. If he can replicate his 2013 Champions League win, expect those calls to intensify.

Their first leg encounter against Besiktas was an important one, and much like against Wolfsburg this past weekend, the expectation was nothing less than victory. It took a late goal from Robert Lewandowski to provide it against Wolfsburg, but expectations were higher ahead of the home tie against the Turkish champions.

The Allianz has so often been a fortress, and Heynckes will doubtless be looking for his team to continue the trend. They were certainly in firm control of the tie at the full-time whistle in Munich, and by firm control, I do of course mean they effectively ended the tie there and then.

Aided by a first half red card for the visitors, Bayern comfortably dispatched the challenge of Besiktas 5-0, with a goal from Kingsley Coman and two apiece from Thomas Müller and Robert Lewandowski.

The second leg should be a formality for Jupp’s men, and the quarter-finals will surely provide a stiffer task, but this was an emphatic message that they mean business.

Bayern have rarely gotten out of third gear this season, and in fairness, they haven’t needed to. They have shown glimpses of the supreme quality they possess at times during this Bundesliga campaign, but if they can work through the gears over the coming few months in Europe, anything is possible.

Certainly, when you see how Müller has rediscovered himself under Heynckes and combined so brilliantly with Lewandowski against Besiktas, you wouldn’t bet against them adding to the inevitable Bundesliga crown in May.

Speaking of the Bundesliga, the inaugural Monday night football saw Eintracht Frankfurt continue their unlikely challenge for a place alongside Bayern in next year’s competition. They beat RB Leipzig 2-1 to move into third, a point behind Dortmund who, largely thanks to a heroic performance from Roman Bürki, overcame Mönchengladbach with a wonderful strike from Marco Reus.

In the battle of the up-and-coming coaches, Domenico Tedesco got the better of his friend Julian Nagelsmann, as Schalke beat Hoffenheim 2-1. The end result is just three points between Dortmund in second and Schalke in sixth. Five into three won’t go, and it’s going to be interesting to see who does and doesn’t make the cut behind the all-conquering Bayern.

As for Bayern, their concern will not be what’s behind them, only what’s ahead, and the five-goal win over Besiktas is a big step towards what the hierarchy crave more than anything.