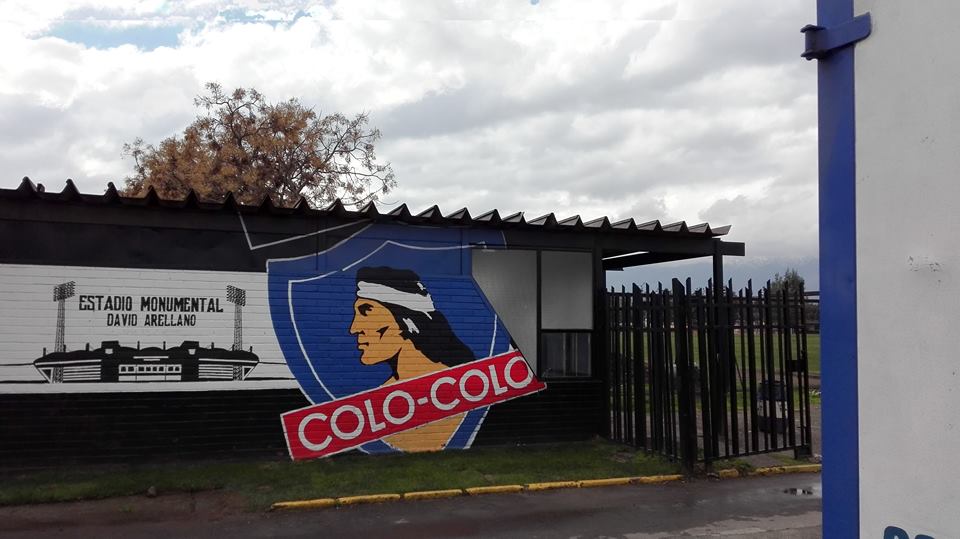 In front of a packed and passionate El Monumental, Colo-Colo deservedly beat Corinthians by one goal to nil in the 1st leg of this last 16 Copa Libertadores clash. Adam Brandon was there to tell us more…

It had been an eleven year wait for Colo-Colo fans to celebrate a goal in the knockout stage of South America’s most prestigious competition. The honour of breaking that much maligned record fell to midfielder Carlos Carmona seven minutes before the break – his well-controlled low drive sent the home fans wild.

Colo-Colo are Chile’s biggest and most successful club by a distance, yet their results in the Copa Libertadores over the past two decades is a stain on their history. Despite winning the competition in 1991, their record since had been poor.

This year, they had looked on verge of going out halfway through the group stage, but a change in management brought a change in fortune and a clear desire to put things right in this competition.

Tactically, the home side won the battle. Colo-Colo’s wing backs had an enjoyable night with plenty of space to run into without ever really being tested defensively. Meanwhile Corinthians’ strikerless 4-2-4 formation clearly lacked a focal point as they struggled to get up the pitch, meaning Colo-Colo’s back three was rarely tested.

The away side produced the first moment of danger when a darting run from promising Corinthians youngster Pedrinho ended with his pass in the box being intercepted as the Brazilians looked to make the early running. 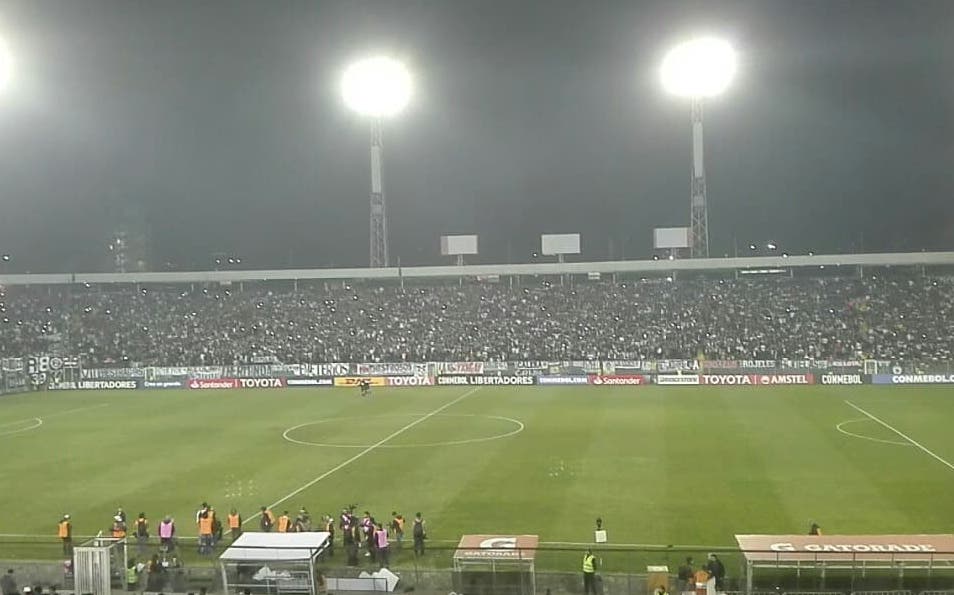 Colo-Colo responded, but struggled to create chances. Carlos Carmona and Claudio Baeza grabbed hold of the game from midfield with the mercurial Jorge Valdivia in front of him ever-tidy in possession yet always looking for that killer pass.

Esteban Paredes and Lucas Barrios worked hard up front and their physicality and experience got the better of this young Brazilian side for much of the contest.

On the 28th minute, a deflected shot from Carmona, from a similar position to where he would eventually score from, struck a Corinthians arm and despite raucous appeals from the Chileans the Colombian referee Wilmar Roldan wasn’t interested.

With Colo-Colo building momentum, the Corinthians goalkeeper decided to act and appeared to feign injury for a minute giving his teammates a chance to regroup.

Yet, it didn’t work. The home side’s first real chance of the contest arrived shortly after when Paredes saw his shot from outside the box deflected wide.

From the resulting corner Baeza headed the ball into the path of Matias Zaldivia who had a glorious chance to open the scoring, but the defender’s effort was brilliantly saved by Cassio much to the disbelief of the majority in the crowd.

Yet the home supporters didn’t have to wait long for a goal. It came about via a superb ball spread to the right wing by the majestic Jorge “El Mago” Valdivia to wing back Oscar Opazo who had space to run into and delivered a low cross that saw Lucas Barrios shoot right at Cássio in the Corinthians goal, but Brazil’s third choice goalkeeper calculated his angles all wrong and palmed it straight back out to Carmona who made no mistake.

It was a moment met with a primal roar from around 40,000 Colocolinos in El Monumental.

There were flash points either side of halftime as it looked like the game was boiling over with the Brazilians increasingly frustrated by the home side’s high energy and physicality. The two playmakers of each side, Romero and Valdivia, seemed to clash numerous times during the 90 minutes.

At the start of the second half, Corinthians looked like they might rally but other than a couple of shots from outside the box, they offered very little all game.

Their task was made harder on 55 minutes when Gabriel was sent off after receiving a second yellow card for leaving his studs high up on the leg of Carmona. The central midfielder kicked an advertising hoarding before heading down the tunnel, whether it was in frustration at the decision or his own performance is anyone’s guess.

Corinthians made a change in response, but it did little to change the look of the match as Colo-Colo continued to dominate.

Meanwhile a strange substitution from the home side on the hour mark saw veteran Gonzalo Fierro come on for the impressive Oscar Opazo.

Fierro was soon involved as Colo-Colo had another handball appeal turned down after a wonderful ball from Jorge Valdivia found Fierro on the right, his cross appeared to strike the arm of the defender but Roldán once again waved away the complaints from the home side.

Not long after, goalscorer Carmona departed the field for Jamie Valdés as manager Héctor Tapia looked for a more creative spark to grab a the all important second goal.

Colo-Colo kept dominating the ball but clear cut chances were hard to come by while the introduction of Emerson for the visitors gave them an outlet on the break.

Corinthians first real move of quality arrived on 84 minutes, but resulted in Danilo Avelar screwing his shot well wide under little pressure after some good work from Pedrinho.

Colo-Colo rallied again late on and must be kicking themselves for not finding a second.

First, Cassio spilled another shot, this time from Valdes, into the path of Damián Pérez but he got away with it on this occasion as the Argentine fired well over the bar.

A minute later Cassio pulled off another crucial save, this time from Lucas Barrios who looked certain to score from inside the six yard box after good work from Pérez, Barrios then slipped on the follow up before it was cleared for a corner.

And when Claudio Baeza’s free-kick flew over the bar just inside the six minutes of injury time, it proved to be the home side’s last real chance to double their advantage before the second leg later this month in Sao Paulo.

Applause and half hearted cheers greeted the full-time whistle. Most in the stadium would have taken a 1-0 lead heading into the second leg, but given the way this match panned out Colo-Colo will be kicking themselves for not making more of their one man advantage in the second half.

The clean sheet could prove crucial for Los Albos and they’ll be delighted at how well they stifled the in-form Corinthians attack. The all-action display from Baeza was particularly impressive given he was on the verge of a move away from Colo-Colo just hours before kick off.

One Colo-Colo goal in the return leg will mean Corinthians need 3 to advance, so the tie is delicately poised, with the Chileans surely fancying their chances of seeing it out on this evidence.

In the press conference afterwards, Ángel Romero praised Valdivia for his performance despite them clashing a couple of times on the pitch. Both men were keen to point out that it was very much experience against youth in this clash and on the night the maturity of the home side told. 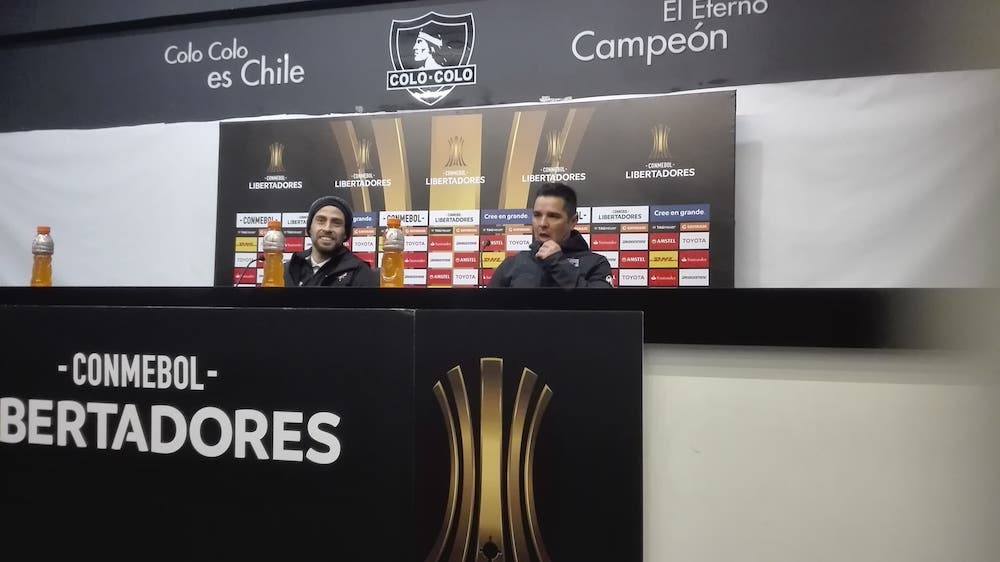 Manager Hector Tapia was delighted with the performance of his side, especially given how mean they were defensively. However, he admitted that he felt the triumph was bittersweet given that his side clearly deserved more than just a one goal lead to take with them to Brazil.

Man of the match Jorge Valdivia also pointed out how well his teammates had shut down the threat of Corinthians, yet made it clear how difficult it will be to repeat the trick so effectively in the second leg in Sao Paulo in two weeks.

It is a city he knows well of course and with a wry smile he said he thinks he has matured since his younger days where he was sometimes overly fired up for clashes with Corinthians. He warned the Braziians that his side will travel there confident of killing the tie and ready to give their all to do so.

The return leg is in two weeks time and falls just days after the Colo-Colo’s Superclasico with Universidad de Chile in what is set to be a high-pressured week for the Chilean giants.