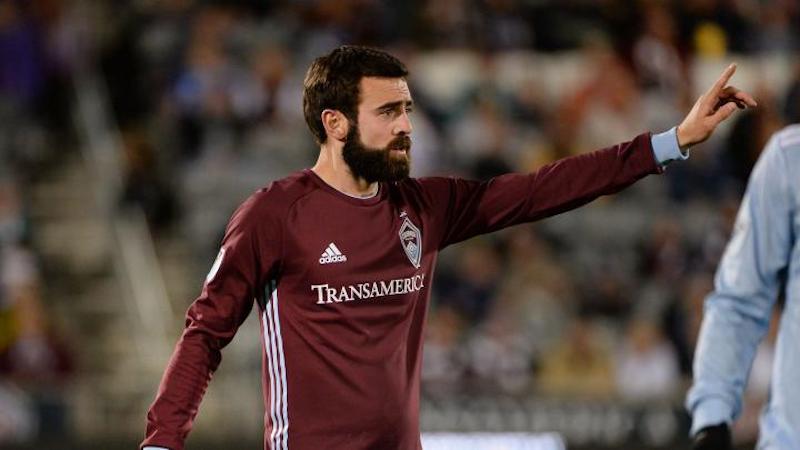 Can I ask your reaction to the recent 2-0 away defeat to LAFC, and did you find with LAFC being the newest team in MLS that they were more highly motivated?

LAFC was a tough match. We feel as a team we did enough as a team to get something out of the game and we deserved more.

We had more possession than LAFC and created the better chances which is the story of our season so far. We have been in games and deserved more than we got, and I believe that was the case against LAFC. We just did not take our chances and we are disappointed to have come away with nothing in the end.

I would say there is a difference in terms of the atmosphere in the ground, which was very good. All their fans were right behind them and you do not really get that with other teams in MLS.

I am loving life here, and MLS too. I am playing every minute of every match and I am enjoying it.

That was one of the big reasons for me coming here, obviously speaking to the manager, Anthony Hudson, he has been great for my game. Personally I feel I have improved as a player and as a person off the pitch since my move to the United States. Colorado is a lovely place.

You mentioned your manager Anthony Hudson. What would you say are his qualities?

I think he is great. He is very good at player management on a one to one basis by telling you what you need to improve on and what you are doing well.

He is very easygoing, approachable and a top man. You can speak to him about anything, not just football but also life in general.

He is relentless as a manager and he has a massive will to win. Every day we are working to improve and that stems from him and his staff they never let the standards drop.

You spent a long time at Wolverhampton Wanderers coming through the youth setup and making your debut and many first team appearances too. How do you look back on your time at the club?

I had a wonderful time at Wolverhampton Wanderers. I signed my first contract with the club when I was eight years old.

Wolves are still in my heart. I look out for their results and it is brilliant to see them back in the Premier League — that is where the club belongs.

It was sad for me to leave as I had been there such a long time and I knew many of the staff and players. The fans were also great to me.

Every time I put the Wolves shirt on I did my best and they could see that and they appreciated that too. I would like to thank everyone for my time there it was great.

I hope that they can now push on this season in the Premier League. I still fancy them to get around the top ten if I am honest. They have great players and backroom staff. I think that they could really kick on.

Could you say who are the best players that you have played alongside in your career so far?

One of the best players that I have played alongside, which a lot of people may not know, would be Kevin McDonald, who is now at Fulham FC.

He was a great footballer and me and him had a really good partnership for a few seasons at Wolves.

He could get out of any situation with the ball or even if he had 3 men on him. He has that quality and class and could chip in with goals and assists and he is a great guy.

I also played with Helder Costa and Ruben Neves. They are great players with great quality.

I believe that one of the unsung heroes at Wolves at the moment is Conor Coady.

He is a great leader and a brilliant player too. I really enjoyed my time playing with these players and it is great to see them doing so well now.

How about opponents. I can imagine playing in your position that you have come across a fair few opponents in your time. Which players have stood out for you?

Well there have been a few, to be fair. We played Chelsea at home in the FA Cup a few seasons ago and I played against Cesc Fabregas. It was like that he was two or three steps ahead of everyone else.

Also, growing up as an Arsenal fan it was nice to play against someone who had done so well for Arsenal. Fabregas is a great player who is so intelligent.

We played Manchester City in the Carling Cup last season and I came up against Yaya Toure who is still such a great player and at times you could not get near him.

This season in MLS I played against Bastian Schweinsteiger who plays for Chicago Fire, and he has still got it. I also believe that he could still play at the top level in Europe. I don’t think he gave the ball away once. He was brilliant and it was a huge learning experience for me to play against that caliber of player.

Finally, Jack, who are the managers that have helped you in your career so far in terms of advice and influence?

When I was 16 I was on the brink of getting a scholarship at Wolves. I had a coach in John Trollope, and he was massive for me in persuading them to offer me a scholarship, as I was quiet, small and Wolves were unsure.

John convinced them that I would be a good player when I get older, so I am very thankful to John for that because if I had not got the scholarship you never know what would have happened. I owe him a lot.

Kenny Jackett gave me my chance in League One with Wolves and I made over 30 appearances that season. Kenny Jackett was so organised. There were no grey areas with him and he kept you on your toes.

My time under him meant a lot because it was my first full season at Wolves and I thank him for that. He is doing a great job at Portsmouth now and they have a great chance of getting promoted this season and I wish them all the best.

Paul Lambert as well, as he managed to get the best out of me by believing in me at Wolves, and that was key in giving me a lot of confidence going forward as a professional footballer.