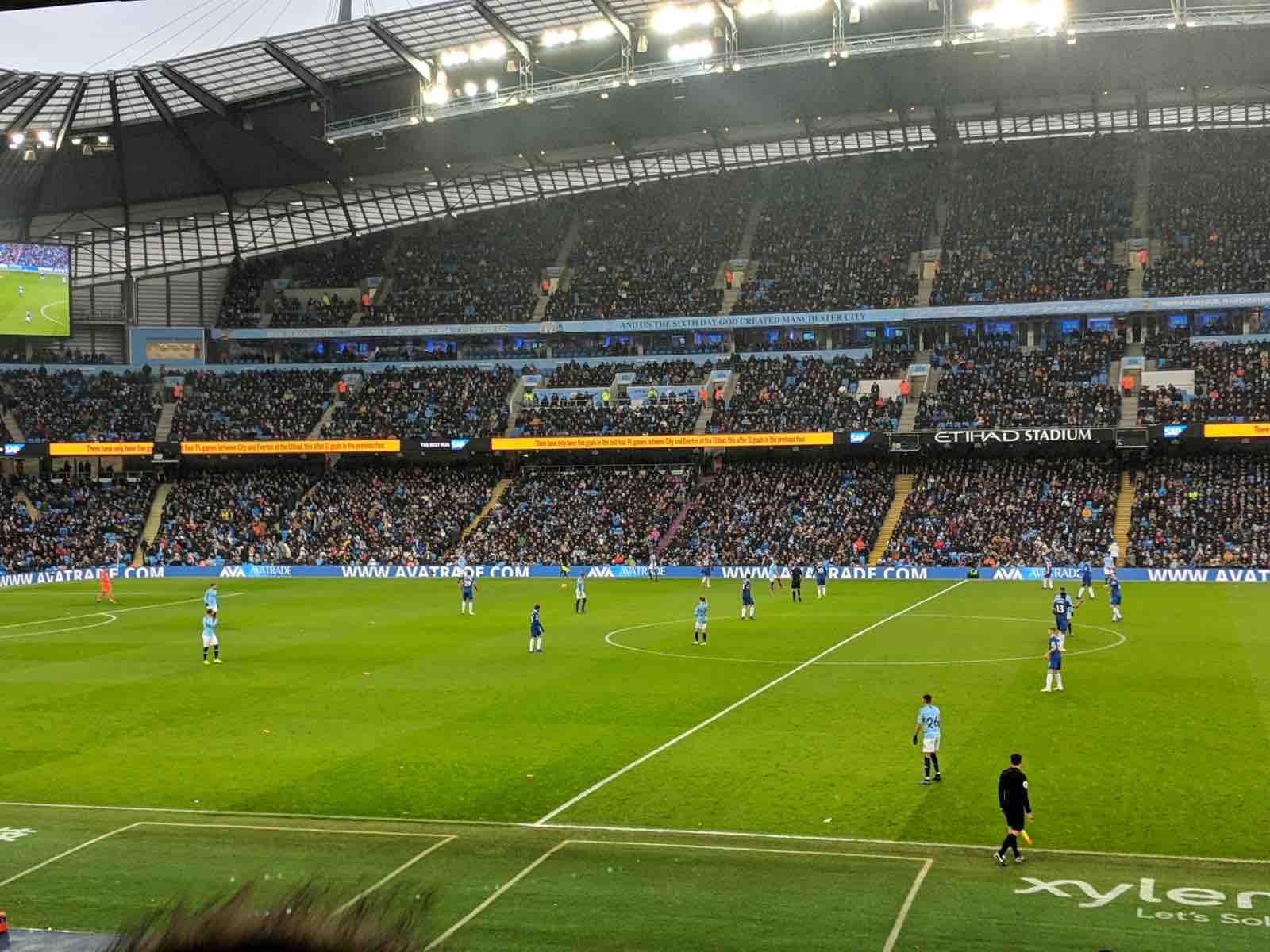 One Brazilian took their chances, the other didn’t. Gabriel Jesus was back in the goals after an 11 game absence from the score sheet, scoring twice in a 3-1 victory against Everton which sends Manchester City to the top of the Premier League table.

Everton created some good opportunities in this game, two of which fell to Richarlison who failed to convert. But just as it’s too simplistic to talk of a Jesus goal drought when there are other factors in play such as a lack of game time, and other good aspects of his play beyond goals or a lack thereof, it’s also unfair to blame Everton’s woe solely on Richarlison’s misses.

The fans who had made the trip from Liverpool down the M62 belted out their Richarlison song to the tune of Oasis track She’s Electric.

Bring It On Down, another track by the Mancunian band popular in these parts due to the Galllagher brothers’ support of City, was played over the PA in an attempt to create an atmosphere in this cold stadium prior to kick off.

The Saturday morning papers and their online equivalent were already preparing for a game between English heavyweights Liverpool and Manchester United, which takes place a day later, but this clash also had the potential to affect the title race.

City had won just two of their previous seven games against Everton, so the red half of Merseyside had some hope that their neighbours could do them a favour. The early signs were encouraging. 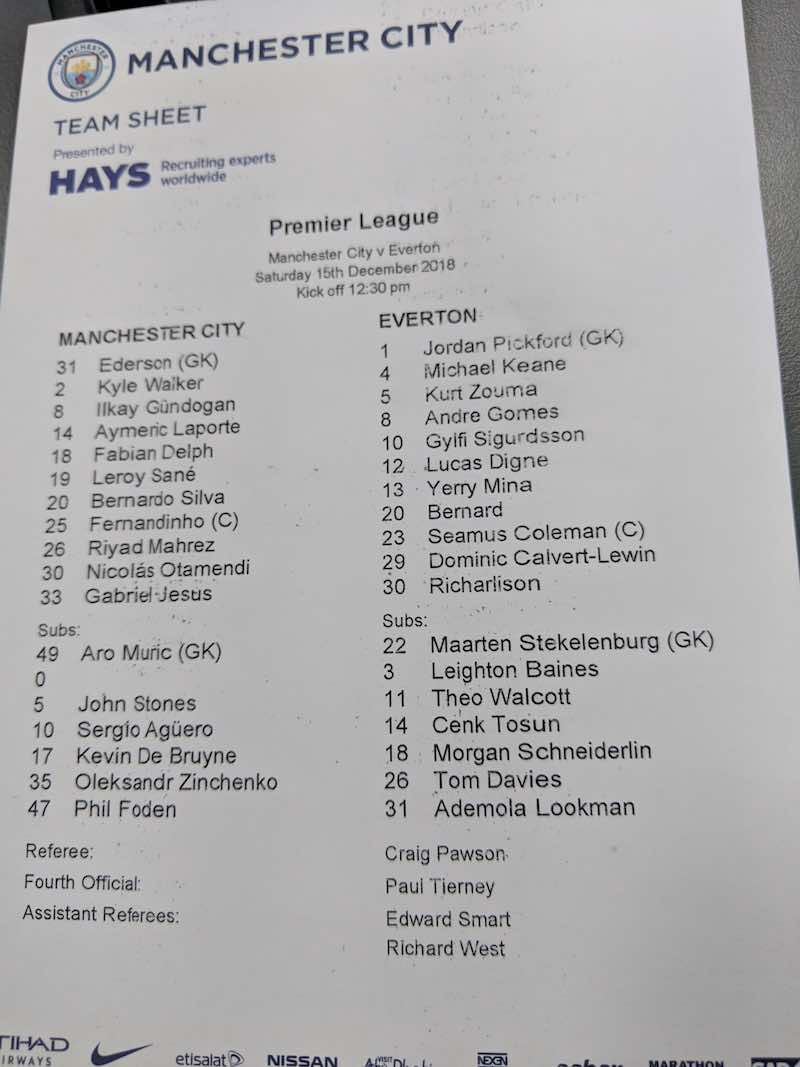 The home side dominated possession, as they do, and Everton’s 5-4-1 formation invited them forward. However, the first chances of the game fell to the visitors, with centre-forward Dominic Calvert-Lewin sending City goalkeeper Ederson to the cold ground to save at full stretch.

The best opportunity arrived at the feet of Richarlison but the unmarked winger volleyed over from Lucas Digne’s cross.

It’s the type of chance City would have gobbled up, and when they were presented with an opportunity of their own they did just that.

Centre-back Yerry Mina sent an aimless punt from defence into midfield which landed on Ilkay Gundogan. The German fed compatriot Leroy Sane who played in Jesus who found the back of the net. Despite their promising start Everton were behind, unnecessarily so, it felt.

Visiting goalkeeper Jordan Pickford was called into action twice to keep the score at 1-0 going into half-time, first saving smartly from his own man, Michael Keane, who deflected a cross towards his own goal, and then from Riyad Mahrez who should have scored from close-range.

Mina got lucky with another wayward pass, but the system wasn’t helping any of the Everton defenders play the ball neatly out from the back. This was the first time this season they have played three at the back from the start of a game, and it showed.

All the Everton back line finding it difficult to hit their targets when playing out from the back, not just Mina. 9/26 long balls completed by their back six, including Pickford. Pass success in 50s and 60s % wise. #MCIEVE

Just four minutes into the second half the Everton back three were left standing like statues. Sane crossed from the left and Jesus wriggled around the obstacles, finding the perfect place to head home his second.

Everton eventually switched to a back four and introduced the lively Ademola Lookman, and it was from his side which Digne crossed for Calvert-Lewin to pull one back.

No sooner had he done so than City were down the other end with substitute Raheem Sterling getting his name on the scoresheet with a goal almost identical to Jesus’ second. It was defensive midfielder Fernandinho with a cross from the byline with his weaker foot, which tells you a lot about the way this City team attack.

“When Raheem has no time to think in front of the keeper it is always a goal. The cross was an incredible action form Fernandinho,” said City manager Pep Guardiola of this moment. 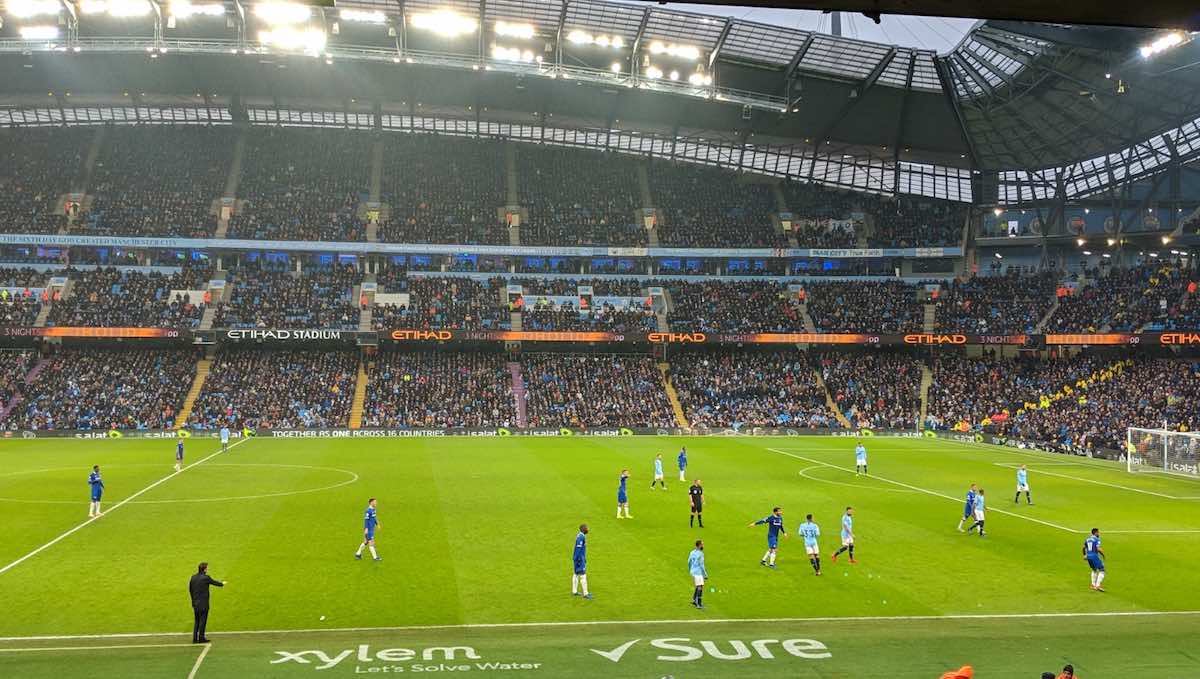 Everton were still creating chances but not taking them. Lookman impressed, putting the ball on a plate for Richarlison and then Theo Walcott, but both skied their shots over the bar.

City introduced Kevin de Bruyne for the last quarter of this game, reminding their rivals of their ridiculous strength in depth, and Guardiola said he is looking forward to having both De Bruyne and Sergio Aguero available in the coming weeks.

But it was another midfielder — Gundogan — who ran the show today, and though he might not have fared too well in the player ratings algorithms based on data, he was one of City’s best players. He is an understated but highly effective part of this City squad.

“It was a tricky game after the Champions League with less than three days recovery,” said Guardiola.

“They are a top side, with experienced players, but we have fantastic players and human beings, and they make a fantastic effort to win the game.”

Stone Roses – Made of Stone