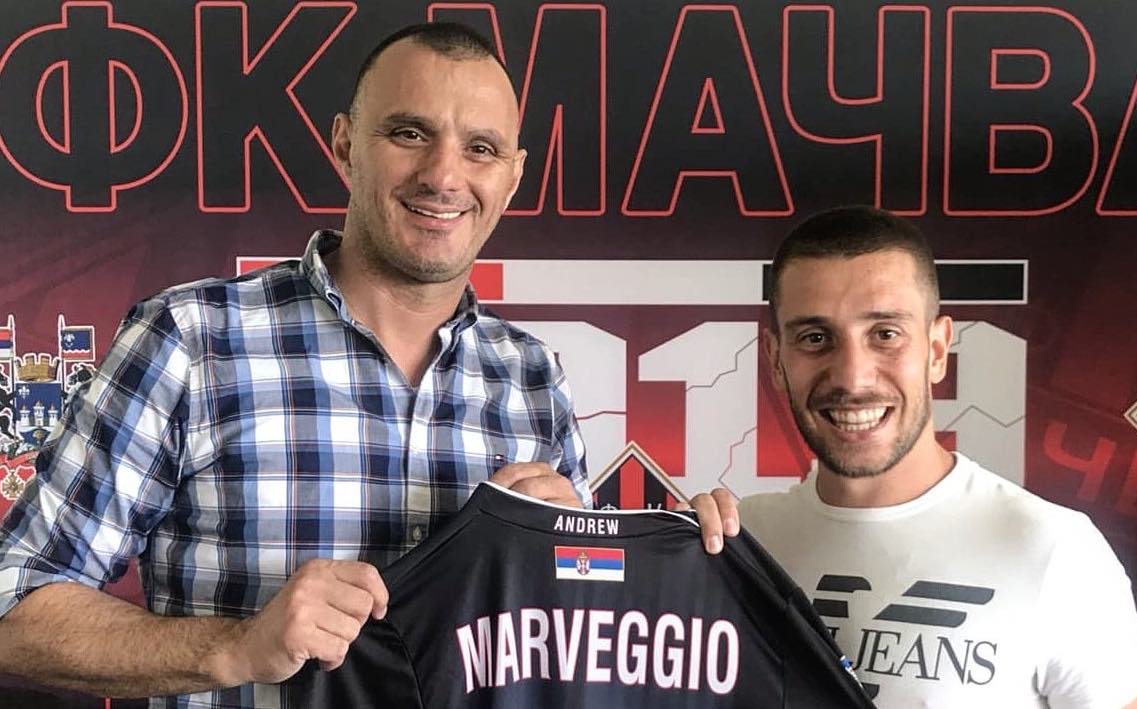 James Rowe spoke to FK Mačva Šabac midfielder Andrew Marveggio exclusively for WFi. They discussed his move to Serbia, his time with Telstar in the Netherlands and the the biggest influences on his career.

You have been playing for Serbian side Macva Sabac since last year. How are you enjoying your time in Serbia, and how would you describe the club?

I am loving my time in Serbia. It is a very different step compared to where I was playing in the Netherlands and Germany, and going from the west to the east side of Europe.

I am relishing the chance to improve myself and my football here in Serbia. It has been a very good experience.

Macva Sabac have definitely helped me and my football to go to another level, and the club have been very supportive in getting me ready to play in the Serbian SuperLiga.

You came through the youth ranks and debuted in your native Australia for Adelaide City. How do you look back on playing your football in Australia?

I look back on it fondly. I starred at the first team in Adelaide City when I was 17 years old. I was playing with players who have played in the national Soccer League — the pre cursor to the Australian A League.

In the two years I was there we reached one final and won the second division in my second year. The experience got me prepared and ready to come to Europe.

You played three seasons for Dutch team SC Telstar. How do you look back on your time in the Netherlands?

SC Telstar was eye opening, especially my first season. Very eye opening as to what professional football in Europe was like, and how hard it is to keep your spot in the team.

Fortunately for me, I had a good manager in Jan Poortvliet, and the technical director, Toon Beijer. They started me off in that process and showed me what I had to do, and the mentality you have to have to be a professional footballer, not just for one or two years but to have a career. That held me in good stead.

I stayed for three seasons at Telstar. I enjoyed it and learned a lot. It was a really good time. A club full of great people and I really enjoyed my time in the Netherlands.

You have played in the Netherlands, Germany, and now Serbia. Are there players that you have played alongside at club level that stand out for you?

Playing in different countries has opened me up to the different styles of football you can experience.

There are probably two players at Telstar who stand out for different reasons.

Footballing wise he was just another level from what I have ever seen. I would also like to mention current SC Telstar captain Frank Kopershoek.

Off the field his attitude, mentality, and professionalism made me try to follow his lead in that aspect. He has been captain of SC Telstar for many years.

I can imagine in your position as a defensive midfielder that you have come across opponents that might have made life difficult in certain matches. Are there any in particular that stand out for you?

One opponent I played against was IIiass Bel Hassani who at the time was at Sparta Rotterdam. I was only 20 years old at the time and a bit naive playing against him.

It taught me not to dive in too much really. He was very sharp on the ball, as you would know as you are in the Netherlands.

He is a player with very good ball control. He has been the opponent that taught me the most in a match in terms of me learning what I have to do to defend against a player like him.

Finally Andrew, you mentioned managers that helped you when you arrived in the Netherlands, including Jan Poortvliet. Are there any other managers that have played a key role for you in your development as a professional footballer?

Yes as I said before Jan Poortvliet along with technical director Toon Beijer at Telstar really showed me the way in the Netherlands.

My current manager at Macva Sabac. Darko Tesovic, he is probably the one that has given me the most confidence to play my football, and not to adapt my game to somebody else’s — to be confident in myself.

That has really helped me to take my game to another level since I have been here in Serbia. He has been the most recent influence in my career.