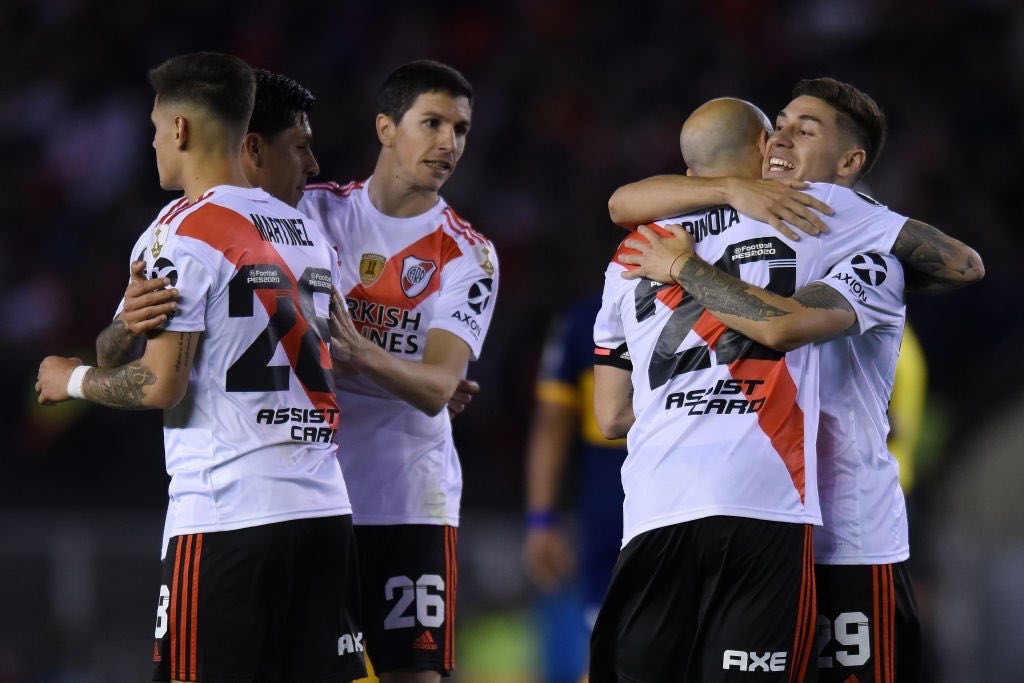 River Plate bagged a comfortable win over rivals Boca Juniors in the much-awaited first leg of the semi-final of the Copa Libertadores between the two Argentine giants on Tuesday night.

The teams emerged to a 70,000 crowd and all the usual colour and passion of this occasion.

After just a few minutes, River surged into the opposition box and were claiming a foul.

When the move finished the referee was called to check the VAR screen and saw a sweep by Boca defender Emmanuel Mas on Rafa Borre. The referee checked it twice and didn’t hesitate — penalty.

Borre hadn’t been in goalscoring form recently, but put the penalty right down the middle and gave the home side an early lead.

🇨🇴⚽💪🇦🇷 Rafael Santos Borré couldn’t have struck his penalty any sweeter than this! pic.twitter.com/UiiAQwLm7R

The first half continued without much quality. Passes were misplaced and fouls were committed on both sides on a cold, windy night.

River had the lion’s share of possession and territory, but after 42 minutes were caught wide open in a key moment in the tie.

The home side committed too many players to a corner, and were left short at the back. Boca youngster Capaldo was given a golden chance to score from eight yards but blazed his shot inexplicably over the bar while unmarked. How Boca were left to rue that mistake.

In the second half Marcelo Gallardo’s side continued to push forward. After 68 minutes, they were rewarded.

They put a smooth attack together and Matías Suarez crossed for Nacho Fernandez to tap in from five yards. 2-0 River, and another superb team goal.

🔴⚪⚽🎉 Nacho Fernández was on hand to double the #River lead against #Boca! pic.twitter.com/t3WYe757oz

From there the champions slipped into a another gear. Boca were struggling to contain River, and could have fallen further behind to Suárez and Scocco chances.

The visitors introduced Tévez, Zárate, and Salvio, but the truth is they didn’t really pose a consistent threat. Their rivals looked ever more comfortable, and in the final minute of stoppage time there was one last bit of bad news for Boca coach Gustavo Alfaro.

Nicolas Capaldo capped a night to forget when he slid in on Enzo Perez. The referee awarded a yellow card initially, which in itself earned him a suspension. Once he reviewed it however, he saw a two-footed tackle and swapped the yellow for a red.

Boca were outraged, but the game was up by then. 2-0 seemed like a sort of damage limitation which leaves them down but not out.

River left the field satisfied but far from triumphant. They know that a two-goal lead is healthy but not insurmountable.

Now to the next countdown. Argentina waited impatiently for five weeks for this tie to start, and will now wait another three weeks for it to end.

By midnight local time on 22 October, there will be raucous street parties on one side of Buenos Aires. At the moment, it’s looking more like the venue will be Núñez, not La Boca.

Loading...
Newer Post
Stefano Sensi: The Future Of The Inter & Azzurri Midfield
Older Post
Rick van Drongelen On The Honour Of Playing For Hamburg & His Love For Sparta Rotterdam