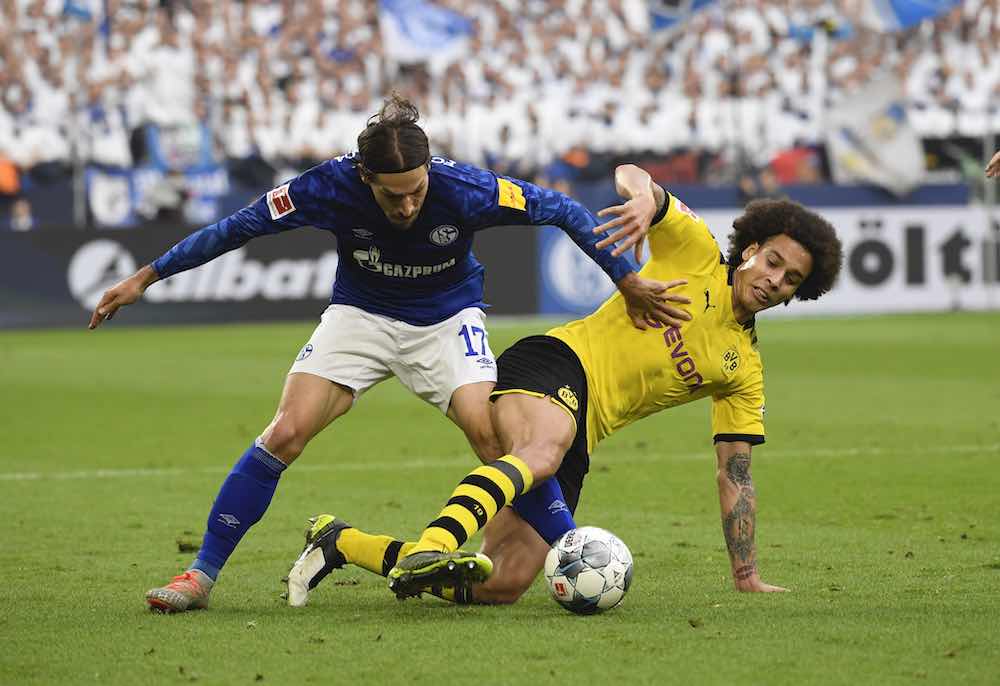 Footballing loyalties are very much divided throughout the Nordrhein-Westfalen region of Germany. I lived approximately 50 kilometres east of Dortmund where Borussia Mönchengladbach and 1. FC Köln are well represented, but they are significantly outnumbered by fans of Schalke and Borussia Dortmund.

Flags fly proudly outside of homes and replica shirts are everywhere on match-day as club pride reigns supreme. None more so than when it’s Revierderby time, when the royal blue of Schalke and the yellow and black of Dortmund go head-to-head.

Traditionally, derbies are a city affair, with Liverpool, Glasgow and Milan the most famous and historically highest-profile.

However, near-city derbies can be as intense a rivalry as any other, as Liverpool and Manchester United will testify.

Dortmund and Schalke certainly fit into that category, and it’s always a passionate affair when the Ruhr’s two powerhouses meet.

The narrative heading into the 155th Revierderby was one of two teams in different places. Schalke’s story was one of a team who have started the season better than expected, with positives drawn from their spirited performances.

On the other hand, Dortmund had not quite lived up to expectation, and where as Schalke had shown plenty of fight, Dortmund came into this game on the back of a meek showing midweek against Inter Milan.

That defeat in the Champions League saw Lucien Favre lambasted for tactics that were described as being outdated.

The Dortmund coach has come under fire this season and was without Roman Bürki through illness and the injured Paco Alcacer.

Meanwhile, Julian Brandt, Thorgan Hazard, Manuel Akanji and Nico Schulz all found themselves on the bench as Favre opted for a more defensive line-up.

Schalke were without Weston McKennie, but did have the promising duo of Amine Harit and Rabbi Matondo raring to go.

It’s fair to say that nobody was more ready for kick-off than the fans with blue and white dominating the eye in the Veltins Arena, though the amassed yellow and black contingent also made themselves heard.

Huge banner unveiled at Schalke: “No matter young or old, no matter big or small, Schalke is always my club” – #Revierderby #S04BVB pic.twitter.com/SHyq5Iukpt

The match itself began in frenetic fashion, typical of a derby. It slowly settled but continued in its back and forth nature with the home side enjoying the better opportunities.

Schalke began to take control just before the half-hour mark, as Salif Sane hit the bar with a header and then, five minutes later, Suat Serdar hit the post after capitalising on a defensive mix up.

At the break, Schalke just lacked the finishing touch in front of goal, but Dortmund were painfully short of any guile and penetration.

The second half continued in a similar vein, with Dortmund hanging on at times and thankful of strong performances from Mats Hummels and Bürki’s deputy Marvin Hitz.

Schalke looked the more likely to score and were the more dominant side until they tired in the latter stages.

It was in those final ten minutes that Dortmund came to life and started to play some of the football they are capable of, but it was too little too late.

Nothing compares to your first #Revierderby ⚔️

So, this Revierderby ended in a goalless stalemate. It was an entertaining with the scoreline not really a true reflection of what went on for ninety minutes.

Schalke manager David Wagner will rue the chances not taken and look back on this as an opportunity missed, not only to get three points over their bitter rivals, but also to heap further pressure on them.

In his press conference after the game, he praised the bravery of his team for the way they took the game to Dortmund, and felt they just needed a bit of luck.

In contrast, Favre has to be thankful for what was a point gained, given that Schalke were on top for the majority of proceedings. It was a workmanlike performance from Dortmund, but with the talent and attacking options within their squad, they really should be setting their sights higher than merely workmanlike.

The bravery that Wagner praised his team for is probably something Favre needs to find when setting up his own team.

Brandt was outstanding for Bayer Leverkusen in an advanced central midfield role last season, using his technique, vision and guile to open up opponents. Favre would do well to find a way to utilise the German international in that area of the pitch, because it’s something his team currently lack. Finding that better balance between attack and defence could be crucial to Dortmund’s title aspirations.

Favre has come under criticism this season, with the hangover of their perceived title capitulation from last year still lingering on. Rumours of Jose Mourinho being lined up as a replacement seem odd, given his approach and style is seemingly at odds with everything Dortmund are about.

What’s certain is that Favre needs to find answers to these questions pretty quick, or that pressure around him and his team will only intensify.

Naturally, the main focus coming out of this Revierderby will fall upon Favre, but Schalke and Wagner should not be forgotten about because they deserve their share of the attention. But, it’s honours even and onto another fascinating derby game next week as we get our first-ever Berlin derby between Hertha and Union. Bring it on!