Jim McInally On Brian Clough, Jim McLean And The Rewards Of Part-time Football 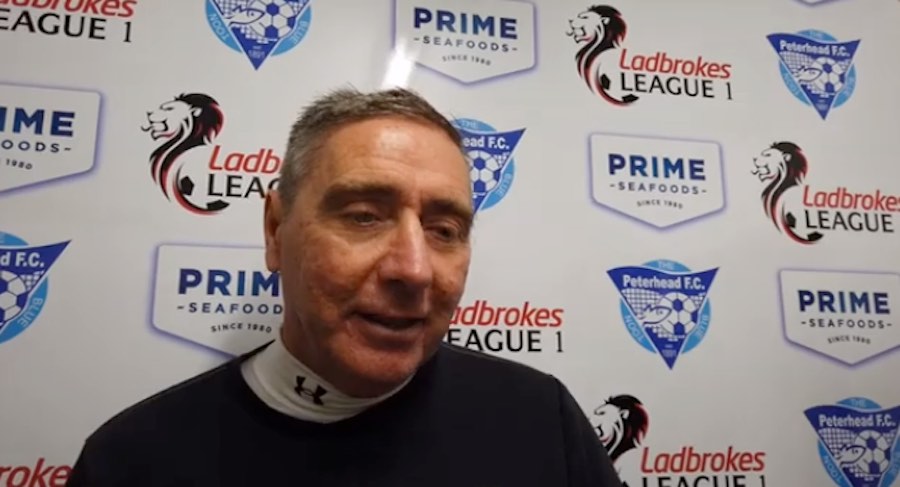 James Rowe spoke to Peterhead manager Jim McInally, exclusively for WFi. They discussed his time as a player under Brian Clough, representing his country, and the enjoyment he gets managing a part-time club in Scotland.

You have been the manager of Peterhead FC since 2011. How are you enjoying managing a club such as Peterhead and what challenges do you face?

“First of all I have been managing the club for almost eight years and it has been a pleasure. I work with good people and people that just let you get on with it. During my time at the club so far we have had good periods, although during one season we got relegated which was really disappointing.

“The highs were most definitely winning two titles and reaching the Scottish Challenge Cup Final in front of a sell-out crowd at Hampden Park, which was a dream come for the club.

“One of the upsides of the club is that we are, in my opinion, the best part-time club in Scotland due to the way we treat people. After games, the club lay on a three-course meal for the opposing team which is something the directors pride themselves in, and I believe it is that bit of class that makes us different to other clubs and it makes you proud.”

You played for many different clubs. How do you look back on your career, particularly your time at Nottingham Forest and Dundee United?

“I always feel blessed when I look back on my playing career. I was a Celtic supporter from a young boy and it was always my dream to play for the club and I managed to do that three times. By the same token I realized that it was time to move on.

“After a loan spell at Dundee I then got an offer from Nottingham Forest, and there are not many times that you can leave Celtic and go to a better team, but that is what I did because Nottingham Forest were the high-flying club, and it was only three years previously that they had won the European Cup.

“It was quite an experience to go and play for Brian Clough, and it is something that will live with me forever. He was a remarkable man in many ways and quite an awesome character for someone like me to play for.

“Having watched him on TV on shows like Parkinson, and then to go down to meet him and play for him was an experience and something that you never forget.

“Dundee United also had a remarkable manager in many football ways — Jim McLean. He was ruthless and football was his life. We would train at the same intensity that we played games. Fitness had to be the maximum and that is something he instilled in me.

“He moved me into the midfield and in my first season, we reached the UEFA Cup Final. I never looked back. I believe that Jim McLean was a football coach ahead of his time. He was a great tactician and coach.”

You mentioned Brian Clough. He rightly had a reputation of being one of English football’s greatest ever managers, As someone who played under him as a player what would you say were his main qualities?

“His main qualities were simplifying the game. I am pretty sure that he would be turning in his grave watching the modern-day game. Brian Clough just did not want anyone to do what they were not capable of doing.

“If you were a centre-half he wanted you to head it and defend well. If you were a full-back to stop crosses and get forward to support your winger. A striker — to hold the ball up and link up the game, and midfield players to pass the ball forward.

“He was also good if you were low on confidence. He would give you encouragement and when he did that it made you feel ten feet tall. I head a weakness with heading the ball and he would say to me at half time: ‘Hey son, you did not half head that ball well today’. You would go out in the second half feeling better about yourself and that made me play better.

“When players were playing well he would pick on them because he knew their confidence was high and that they could take it. His football management was so simple. He was magical in making players feel good about themselves.

“There was also a side of Brian Clough that many people did not see. When I went to Nottingham Forest I stayed in a hotel and he invited me to come and have Christmas dinner with him and his family, which was something special.

“He did not want me spending Christmas in a hotel and he allowed me to impose myself on him and his family, and people do not often speak about [that side].”

During your playing career, you were capped by your country of Scotland. How do you look back on representing your country and do you have any special memories or highlights?

“It is something that I have always been honest about. I never thought that I was worthy of playing for my country. I was a hard-working player playing for Dundee United that had a terrific run in Europe and your performances make you stand out.

“I was never particularly comfortable when I went away with Scotland because I always felt that I was inferior to the players I played with, but that did not stop me enjoying it.

“My biggest and happiest memory, believe it or not, was just a short appearance as a substitute in the 1992 European Championship in Sweden against the then CIS.

“I think it was the first time that Scotland had won a game at the European Championships, so it was a special night and a great way to finish off a tough campaign.

“We were in a group with the Netherlands and West Germany, too. I was not on the pitch a long time, but I felt like I contributed. It was very special to represent Scotland at a major tournament.”

You have been a manager for quite some time. With experience managing, among others, Greenock Morton, Sligo Rovers, and currently Peterhead. Is there anything specific that you would like to achieve or experience in the remainder of your managerial career?

“To be honest my own ambition is to remain manager of Peterhead FC. I think the league that we are in is where we should be but it would be fantastic if we could take the next step and try to get into the Scottish Championship. It would be something special.

“In terms of my personal ambitions, I have no wish to go full-time again. I think that football can sometimes be frustrating at full-time level. I have really bought into the part-time football mentality, and I appreciate part-time players so much better than I do full-time players.

“Sometimes [I] get annoyed with the attitude of players and the money involved in professional football, and I believe that it has taken away a lot of the enjoyment of the game.

“So I prefer the part-time side of it and, to be honest, with the players and understanding the sacrifices that they make to play for a club like Peterhead, I am just so happy being where I am. I would love to take us up another league but I know that it will be pretty tough to do.”