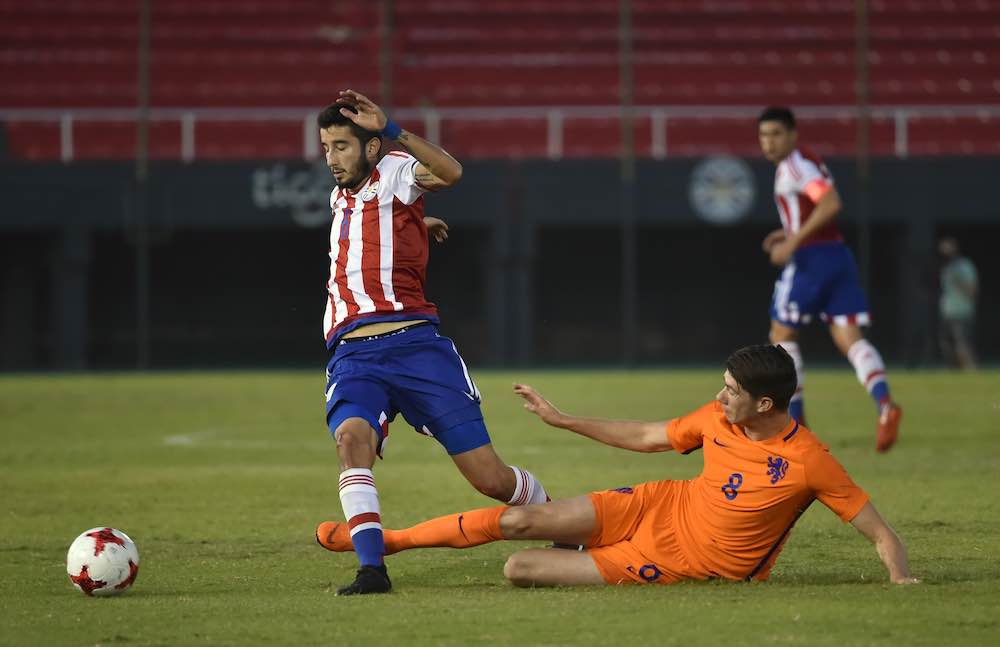 Last month, Mathías Villasanti was one of three new players to earn a senior international cap for Paraguay as they travelled to Europe.

This would not be only a new experience for Villasanti, but also for most of his fellow Paraguayan team-mates as La Albirroja had not visited Europe since 2017.

The call-up came about after a string of impressive performances for his club side Cerro Porteño as well as performing to a high standard at youth level for Paraguay.

Villasanti is one of many players which Eduardo Berizzo has called up under the age of 23, which shows the manager is keen to look towards the promising upcoming youth talent in Paraguay.

Villasanti was obviously delighted to hear the news that he had been selected to represent his country for the first time.

“The head of the press wrote to let me know that the physical trainer would be calling me to tell me something important,” Villasanti told WFi.

“The physical trainer calls me and tells me that I was selected etc. and I was really excited, I was very happy because it was something I had been waiting for”

The call up meant that Villasanti travelled with La Albirroja to take on tricky opposition Serbia and Slovakia.

So which opposition player did Villasanti find most difficult coming up against during the two games?

“Kolarov was the one that impressed me the most because he played in central defence but has the technique of a number ten, we went out to press him, but he always to find his way out of trouble,” he said.

In the match against Serbia, Paraguay fought well and created several chances, but failed to convert.

A red card early in the second half meant that the Paraguayans played the majority of it with ten men. It eventually cost them late on as they went down to a one-goal defeat, which in the grand scheme of the match was undeserved.

In the second match in Slovakia, Paraguay dominated the possession with Villasanti at the heart of the midfield, however, as in the first match they were unable to take advantage of the chances they created and ended up going a goal down.

Thankfully they fought back and managed a creditable draw out of the match.

Villasanti played in both matches, so how did he feel the team and himself got on?

“I feel overall we did pretty good,” adds Villasanti.

“I think we did a good job as a collective because as players we always perform better when the whole team does.

“That’s why I think it went quite well. I think I have to work to improve and adapt to the intensity, to maintain that during the 90 minutes.”

International football compared to the Paraguayan league is a big step up in terms of quality, even in terms of little things such as how much time you get on the ball. This is something which the 22-year-old realised during his time with the national team.

“International football was a lot more difficult than club football,” he says.

“Because the truth is that there is a lot of difference in the intensity with which you play and the time you have.

“But once you adapt to the game and the intensity of it you can begin to enjoy a lot.”

Roberto Rojas, a Paraguayan-American football journalist for beIN Sports USA, shared his thoughts on how Villasanti got on for Paraguay.

“I think with Villasanti he was secure and confident in the midfield,” Rojas told WFi.

“He was able to pick up the ball and provide much more of an effect to the attacking players.

“Villasanti was able to control the tempo and he was able to provide a decent number of opportunities when Paraguay went on the attack in both games.

“What really impressed me was his intelligence on the ball and being able to pick the right pass.”

In March 2020 the South American World Cup qualifiers begin, and in June, the Copa America returns. Villasanti will be fighting for a place in the squad and will be doing all he can to impress the boss.

“Of course I believe I can impress Eduardo Berizzo, I am going to do my job with my team-mates and I trust in my ability that I can earn a place,” Villasanti added.

This season Villasanti played in the Copa Libertadores for Cerro Porteño where he featured in every game. Performances in South America’s top club competition set the 22-year-old on his way to a Paraguay call-up.

Cerro Porteño’s run in the competition was very impressive. They made it to the quarter-finals and enjoyed some emphatic victories along the way, including wins over Nacional, San Lorenzo, and Atlético Mineiro — whom they defeated twice.

During the campaign the Cerro fans were outstanding and this inspired them on the pitch as Villasanti and his team-mates went unbeaten in the competition during their home matches at Estadio General Pablo Rojas.

In the quarter-final against last years champions, River Plate, El Ciclón faithful boasted a stunning firework display in the stands, which caught media attention not just in South America, but across the globe!

“What I enjoyed most the win against San Lorenzo, and celebrating with all the fans,” adds Villasanti.

“The Copa taught me some great lessons and made me a better player. The game against Mineiro, in truth, was one of the most beautiful things in the tournament because with the push of our fans we added goals in the blink of an eye.”

At just 22 there is plenty of time for Villasanti to grow and improve as a player, as well as working towards other goals in his career which he has set himself.

“I want to continue to be in the national team, stay there and reach the top, be transferred abroad to a top league,” he said.

“It has always been my dream to play in the German or Spanish league.

“If that is not possible I would like to stay and leave as champion with Cerro Porteño.”

The good news for Villasanti is that he has earned a place in the squad for the upcoming international fixtures where Paraguay take on Bulgaria and Saudi Arabia — something he can look forward to and hope once again to impress the Paraguayan fans and coaching staff.