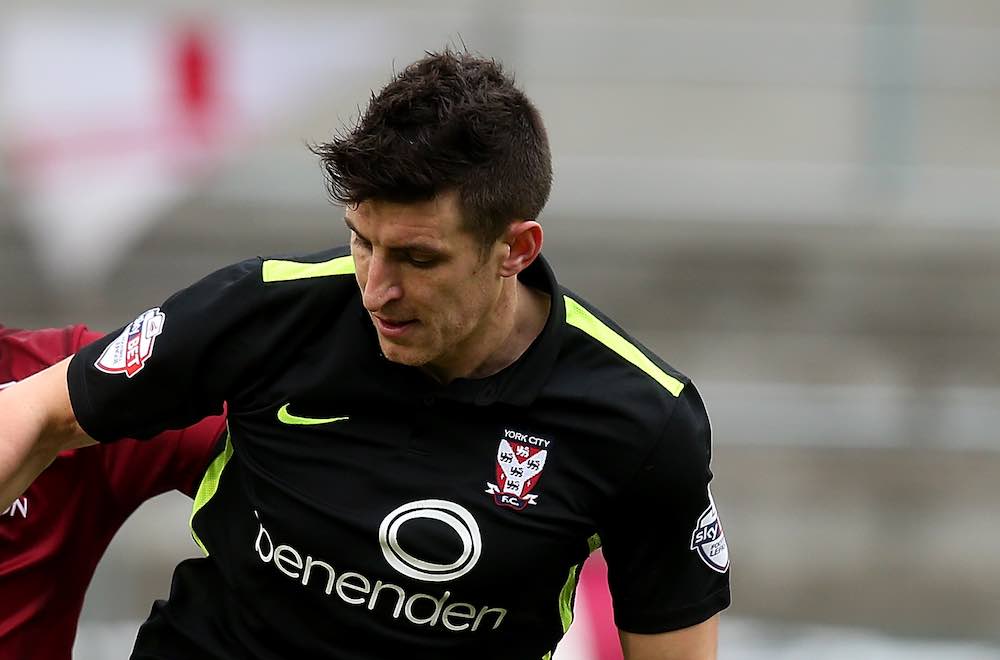 James Rowe spoke to Scarborough Athletic forward Michael Coulson for WFi. They discussed his time playing for two Yorkshire rivals, his time in Scotland, and the influence of Neil Redfearn.

You signed for Scarborough for a second stint at the club in 2017. How are you enjoying being back and how would describe the club?

“I am really enjoying being back at the club and being back in Scarborough.

“I have been away most of my career so it is nice to be back home. I got a great response from the fans upon my return, which was great.

“Scarborough Atletic have a great fanbase with fans that are very passionate.”

You played four seasons at York City making many appearances. How do you look back on your time there?

“I believe I played the best football of my career at York City. I had some great times. It is also strange because York City are Scarborough Athletic’s biggest rivals.

“We reached the League Two playoffs and lost to Fleetwood Town which was unfortunate because we had a great season that year. I particularly enjoyed that season.”

You played for St Johnstone in Scotland during the 2016/17 season. What was it like playing in a different league environment outside of England?

Yes, at the time I thought to go to St Johnstone was an opportunity that I had to take. I had a few offers from English clubs but I just thought that the opportunity to go to Scotland and play in some big football grounds against good football teams was too good to turn down.

“Unfortunately it did not go quite to plan, I had a couple of injuries that set me back and I did also not see eye to eye with the manager Tommy Wright, and a few other things.

“Unfortunately it was not a successful spell, but looking back I am pleased I tried it, It just didn’t work out.”

“There are a couple of players from my spell at Barnsley which is the highest level I played at, so they are probably the best. Players such as Jon Macken who was a striker who played in the Premier League, Bryan Howard a midfielder who ended up moving on to Reading FC.

“From my time playing in Scotland, Danny Swanson who is back at St Johnstone now. I would say that these three players are the best that I have played alongside in my career so far.”

I can imagine in your position as a forward across the front line that you have come across some difficult opponents through the years. Are the any you have played against that stand out?

“Yes, definitely. There are a couple of players I played against in Scotland who were very good, such as Shay Loughan of Aberdeen, and James Tavernier from Rangers.

“Some very good players who you know as soon as you come up against them that it is going to be a tough afternoon.”

Could you say who are the coaches or managers that have played a key role in your development as a professional footballer?

“Neil Redfearn at Scarborough during my first spell at the club. He was the one that believed in me and sent me to train with the Barnsley team, which lead to my move there. He is probably the manager that has had the biggest influence.

“Nigel Worthington at York City. I really enjoyed my time playing under him. He had great man-management skills. He knew exactly how to get the best out of people, and was always open for a chat.

“He knew what to say to the players at the right time. We had a few fallouts at times but he never held any grudges. He was open and I believe his experience managing at a higher level such as the Premier League shone through at a lower level with what he managed to get out of us as a squad of players.

“I have been lucky in my career to have played under a lot of managers who have all believed in my and I had a great time working under most of them, to be honest.”

Finally, Michael, have you given any thought to life after football?

“Most footballers want to do some sort of coaching and at the moment I was ruling coaching out, but the more I think about it the more that I want to get into coaching.

“I am putting things in place now to gain some qualifications and do my coaching badges. It is something that as I have got older that I have wanted to do, so fingers crossed in the future that I will be qualified enough to do some coaching in professional football.”