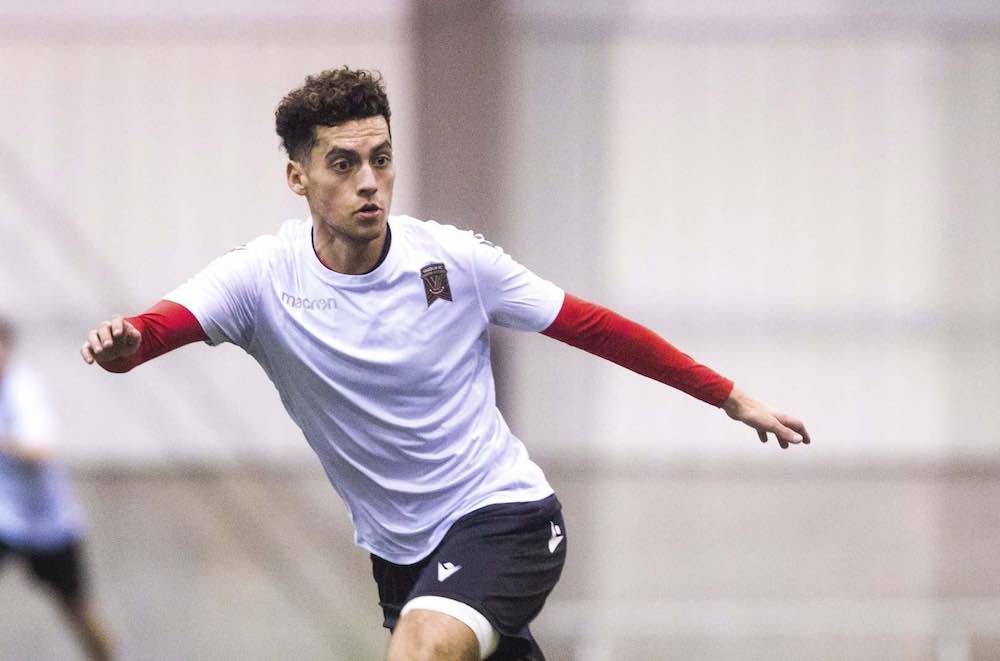 Is Bogotá Or Manizales your hometown in Colombia? The one you feel most attached to.

“I was born in Bogota but only lived there for a couple of months until moving to Manizales, that is my real hometown for me even though I wasn’t born there.

“I only lived there until I was six, but I still remember a lot of my time there before moving to Canada. Playing multiple sports like swimming, tennis, and soccer. It will always hold I place close to my heart because my closest family lives there and I didn’t get to live with them most of my life because of visa problems.”

Growing up in Ontario, and specifically playing in Oakville which is part of the Greater Toronto area, did you feel that the talent pool is quite deep in the city?

“For sure. Growing up in Ontario, especially close to Toronto, they definitely have a lot of talent to choose from.

“Most of the time those teams were usually always superior, and if you wanted to be on a good team you would go there.

“I grew up playing for Hamilton and Burlington U12 to U18, and we made great squads with these teams.

“But yeah people from all different places always seem to pick the Toronto area to live, and this makes for great soccer talent in the province.”

You went down to Uruguay to play for an established club like Defensor sporting. What are the lessons you took from there?

“It was my second time leaving the country to go to chase my dream. You really needed to get out of Canada to become a pro, especially living so far (St. Catharines) from Toronto.

“One big lesson I took away from this is that talent isn’t enough, you need to be determined and very disciplined to get to the next level, and even through hard times you still need to show why you are there. Never give up.”

How was it playing for a Canadian soccer club over in Uruguay? Can you share the story?

“It was amazing. I didn’t know much before about this Canadian team based in Uruguay, but I had the chance to work with some great people.

“Chances to play outside of Canada really teach you about the pro lifestyle, having to adapt to different styles of play, and working with different coaches and players who look at the game in another way.

“I think every country has its own way of playing football. I’m grateful for that chance to play in Uruguay and always happy to go back.”

You recently played for Deportivo Pereira in Colombia’s second division. What’s the competition level like?

“The Colombian league has unbelievable talent and it’s only getting better, you can see how many players come out of that league to become greats in the game.

“I think like I said before it had its own style of play. They like to touch the ball a lot and the midfielders are always involved.

“The CPL is still creating its style of play but I think from this past season that a lot of teams like to move the ball and create openings, and this is great because I believe that this style of play is what is going to make the CPL grow its fan base and gain popularity in the soccer world.”

Octavio Zambrano introduced you to the Canadian national team for a friendly vs curaçao in Montreal and named you in Canada’s 40-man roster for the Gold cup in 2017. How humbling was that experience?

“Overall the whole experience was amazing. I learned so much by being there and training with so many great players.

“I think it was a dream I had since I was a kid, and when it came time to go join them in Montreal, it really made me think back to all the boring nights training with my dad or with my team. It was all worth it and it still is until I achieve everything I want to achieve.

“Thanks to Octavio Zambrano I had the chance to make this possible, and I’ll be forever grateful for that amazing experience.

“I need to just keep working hard and focus on what’s next, and soon enough the time will come to join the Reds.”

What do you think your chances are of making the U23 Olympic qualifying team in March?

“I don’t think I had the season I was hoping to have, but I believe I should be there and I’ll keep working and training as hard as I am.

“I think everything happens for a reason and only time will tell. I’m just going to keep my head down and keep doing what I love.”

Being part of the first-ever season of the CPL, how well did you think things unfolded?

“I think the league was great overall. Being the first-ever season, I think they know the areas they may need to improve because they only want things to get better.

“The fans have a big impact on this and they will look for other ways to get people involved and attached to this league.

“Canadian football has grown so much over the years and this league is taking it to whole other level. It’s a blessing to be part of this league and it’s a memory and milestone that ill never forget.”

Coming back to Hamilton to play at Tim Hortons Field and having your family come from nearby Burlington must have meant the world to you?

“Amazing. It’s hard to put into words the amount of happiness and joy that this brought to me when I stepped onto the field in Hamilton for this first time with Valour.

“Before the first game against Forge at Tim Hortons Field I was very nervous but also excited because it felt like home, bringing me back nine years ago when we used to train or play friendly games with Saltfleet at the old Tiger Cat Stadium.

“This was also the first time my brother and sister had the chance to see my play live, and also having my nephew and niece present was unreal. I also had a bunch of my friends come out to watch and support.

“Those are the kind of games you play for and hope to keep having these moments, it really reminds me why I do what I do.”