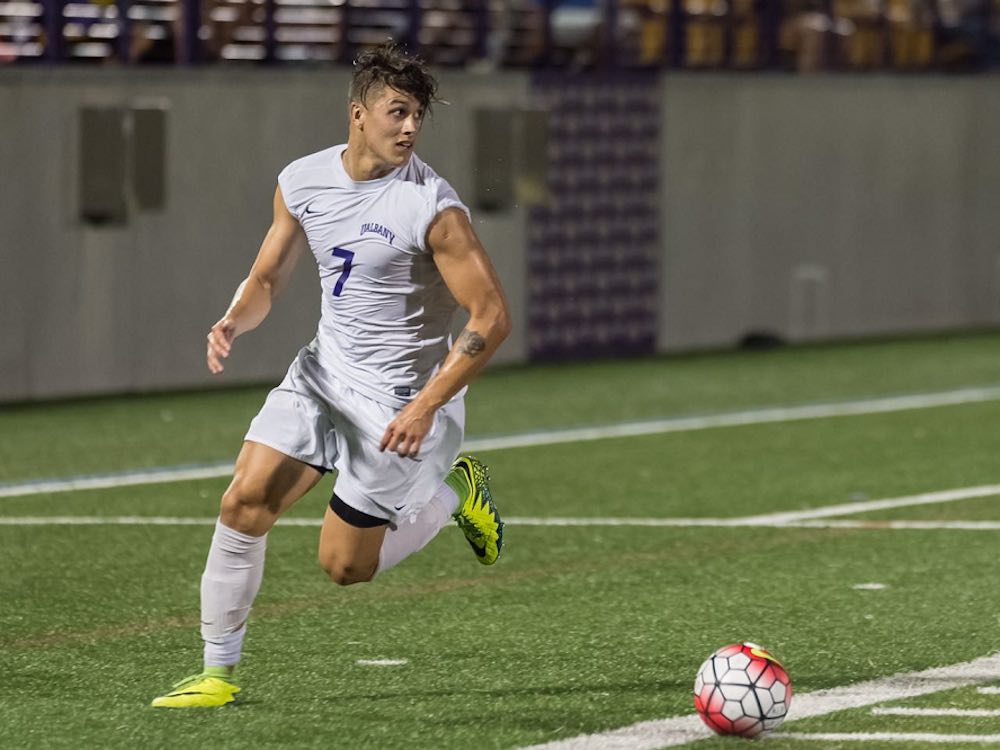 Part one of Thomas Nef’s interview with Chilean forward Nicolas Solabarrieta looks at college soccer in the United States, adapting to a new style of play, and the difficulties players face when trying to turn pro in the country.

At what point did you make the decision of going to school in the US? How did it happen and why did you choose this route rather than looking to turn pro in your native Chile?

“I remember it perfectly. This guy approached me after a SuperClasico against La U in the U19s, with the head coach of the University of Albany. They talked to me and said they were very interested in taking me to Albany.

“JP told me they were a company that helps high school and academy players to go to the US with an athletic scholarship. At the time I wasn’t really convinced, to be honest, and told him that I was grateful and that I would think about it since it was still my goal to make the first team of Católica.

“When I was going into my second year in the U20s, which is the reserve team, I had a meeting with the president and the manager of the team.

“I was told I was going to make the cut because they were cutting some of the older and younger players in that age group, but that I wouldn’t be the priority as a forward because there was a kid that was actually a very good player coming through, and they really liked him so he was going to be the priority.

“I wanted to fight for the spot, but telling me that I would be the second striker was when I really started to evaluate if I really wanted that, or wanted to take a shot and go to the States.

“I spoke to the coach again, and when we had that meeting he really convinced me because he said if I did well in college, he was definitely going to put some help for me to get me to an MLS team.

“I knew the education was important, but I really went because of Barry Gorman who said he was going to help me.”

You attended a showcase tournament in Florida which lead to you being looked at by colleges in the US. Can you tell me about that week?

“Yeah, I remember that showcase [tournament] in Disney. It was very well organized which was nice and the level was pretty good.

“I remember going there because this was happening before committing to Albany, and after I had the meeting with the president and manager of Católica and JP.

“They basically the guy with the company who told me that he wanted to take me as an added player and that I didn’t have to pay anything.

“They just wanted to take a look, and they knew I was more focused on pro soccer, and took me there for and experience as well as try to convince me that the US was a great opportunity.

“I went there to showcase — I did very well and the team did very well. We lost 1-0 in the final against FC Dallas U20s, and I had a couple Division 1 and Division 2 schools reach out to me. That’s when I started making up my mind.

“I saw the professionalism that they give to college sports , so I thought this is nice and want to be a part of it.”

Going to the University of Albany for four years on a scholarship, how much did that impact you as a player and person?

“Going to Albany was definitely great for me. I met so many good people, so many who are friends to this day. I’m very grateful for the experience there.

“Living on your own, not knowing anyone, not knowing the culture, it makes you more mature. Moving to a different country at 18 definitely made me grow up, and that translated into the field as I became a more mature player and understand the game better.

“American soccer is much less about technique and more about running. Obviously you have to adapt to that game, and I think that it was crucial to where I am today.

“Adding the technique plus the physical part is very important, and it helped me a lot in terms of my nderstanding of the game as well.

“I was used playing in a very skilled environment with a lot of passing and a lot of combinations — the tiki-taka style. Adapting to kick and run was really tough at first, but when I finally did it was great. We did very well as a team.”

For people who don’t know much on NCAA D1 Men’s soccer, how competitive is it and would you say the quality is undervalued?

“Yeah I think it would be nice for people to start knowing more about NCAA college soccer, because even though it’s not the most technical game (South America is known more for that, and Europe as well) people try to undermine it because it’s university level, but it’s actually very good level.

“It’s very physical. There are a lot of kids coming from different academies in the world and not just American kids. From Germany, Spain, Brazil, Belgium and more, so the game is actually very high level.

“It may not be as high as the academy level, but it’s ideal for whoever wants to keep playing at a high level while also getting an education.

“There’s no need to undermine college soccer. It’s tough to play in and so physical. After coming back to Uruguay I realized how much slower the pace was here, and this is pro level.

“I find it surprising that college soccer was faster than professional soccer, but that’s how it is. Obviously there’s less skill so they have to compensate it with speed, so it’s not easy to have success in it.”

You had a training stint with Columbus Crew, what was your overall impression of the MLS environment?

“I think it was a good experience to see many other kids from other schools there — Indiana, Akron, UCLA — competing and training with them. I really don’t think that impression is enough to get signed. The combine is too short, so it’s impossible to evaluate you in that time frame.

“For example, the Columbus Crew was one day. It was between seasons so the coaches are obviously not paying that much attention to the kids who are training.

“To share with the professional players and see the facilities was excellent. I got to meet people I wouldn’t have met otherwise.”

You were not selected in the MLS Super Draft, something that you had said was a goal of yours. You trialled with Sporting Kansas City’s reserve side, Swope Park Rangers, but due to lack of international spots you did not make the final squad. What are your thoughts on that?

“I’m not gonna lie, I was very disappointed when I didn’t get selected in the super draft. I think I did more than enough and in the case of Daniel Krutzen, too, with Albany, we won two tournaments in a row, qualified to the NCAA tournament, and moved into the rounds.

“In my personal case I scored a lot of goals, a lot of assists, broke some school records…

“I definitely knew I was good enough to go to the combine and get selected, so when I didn’t see my name I was very upset.

“Maybe they’re a lot better, but you just aren’t there. One of my goals is to make MLS and break the system.

“There’s so many good kids in the smaller schools and mostly international because we have no idea the difference.

“I love Albany, gonna be a Dane forever, but their soccer history isn’t as big as Akron for example. It makes me mad that players overlooked for the name of the school. Every year there are players that get overlooked.”