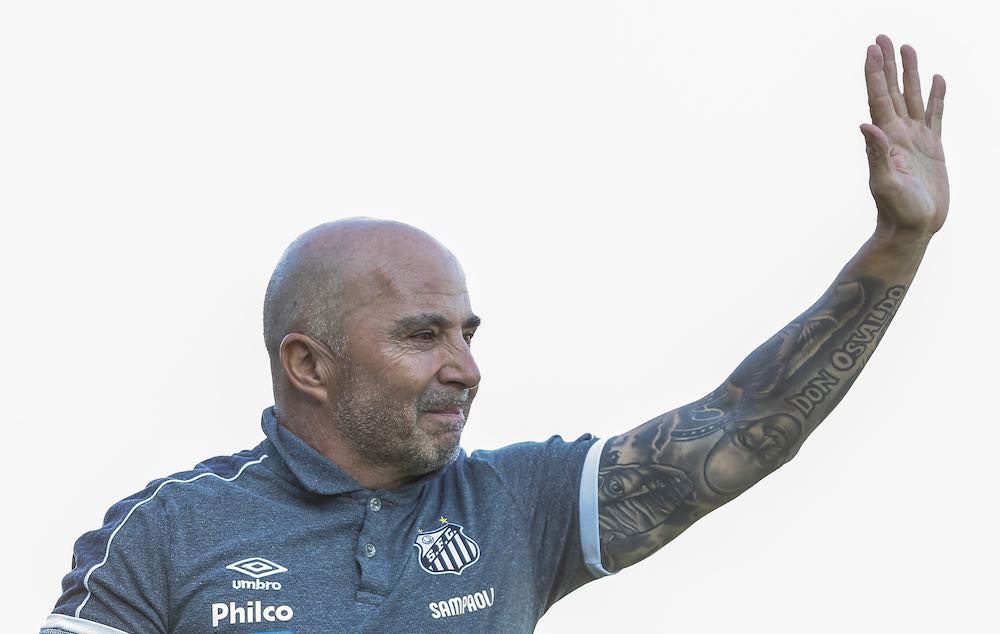 After months of speculation, Jorge Sampaoli has stepped down as Santos head coach with his contract due to expire at the end of the year.

The Argentine coach has been rumoured to have been offered numerous jobs elsewhere. This comes after impressing during his only season at Santos.

A disappointing World Cup with Argentina left Sampaoli without a job for around six months until the Brazilian club came calling in December of last year. Santos was willing to take a big risk by hiring him and it’s a choice which subsequently paid off.

Sampaoli’s coaching style is mainly focussed on playing the ball out from the back with short passing in an attempt to have the main share of the possession, along with this he wants his sides to take the game to the opposition.

When attacking he likes to have plenty of players going forward to enable his side to create several opportunities. – something which is not common in South America as managers tend to adopt a defensive style.

This was evident at the beginning of his tenure as Santos took time to adjust to his ways. They went out at the semi-final stage of the Campeonato Paulista and suffered a shock defeat in the first stage of the Copa Sudamericana against River Plate of Uruguay.

Luckily for Sampaoli, the board understood that his methods would take time to adjust and the results didn’t affect his position at the club when others might have parted ways with their manager, despite the actual league campaign not starting.

The confidence they showed in their new head coach would eventually come to light when the Campeonato Brasileiro got underway four months into his spell at the club. 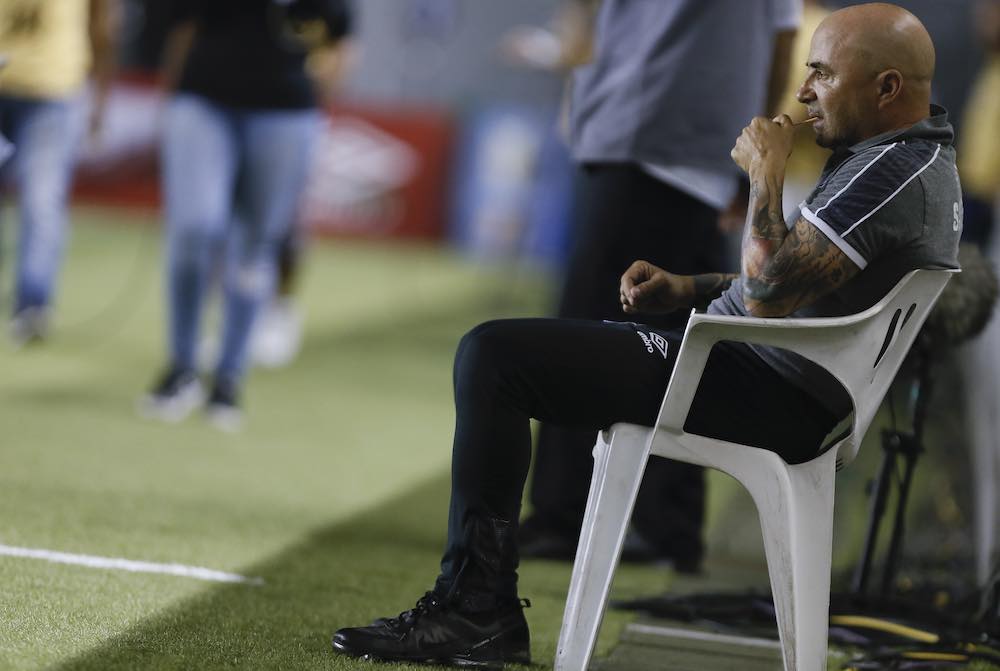 The previous season under Cuca saw Santos finish in a disappointing tenth place. Under Sampaoli the lowest position Santos was in all season was 9th which came after the first match — a 2-1 win at Grêmio. Come to the end of the season they would go on to finish in second place.

Not only did they get results but Santos played matches on the front foot. During the 38 leagues matches, they created an average of just over 15 chances per game. In terms of possession, they had the majority of the ball averaging 54%.

Sampaoli’s intent to play out from the back was shown as they made around 500 passes per game. 85% of those were defined as short passes. He even involved goalkeeper Everson in the build-up play.

The defensive line was usually deep when the opponents had the ball, making sure players were compact so that when the ball was won back an easy pass could be made. This helped Santos to concede seven fewer goals than in the 2018 season. They also kept 17 clean sheets throughout the campaign.

To the pleasure of the fans, the improvement in defence did not affect them going forward as their attacking game improved dramatically. In 2018 Santos scored just 40 times. Under Sampaoli they managed 60 goals in the 38 league matches they played. When attacking the two centre-backs stayed back with the defensive midfielder dropping in to help them, this allowed the full-backs to push forward and join the attack. 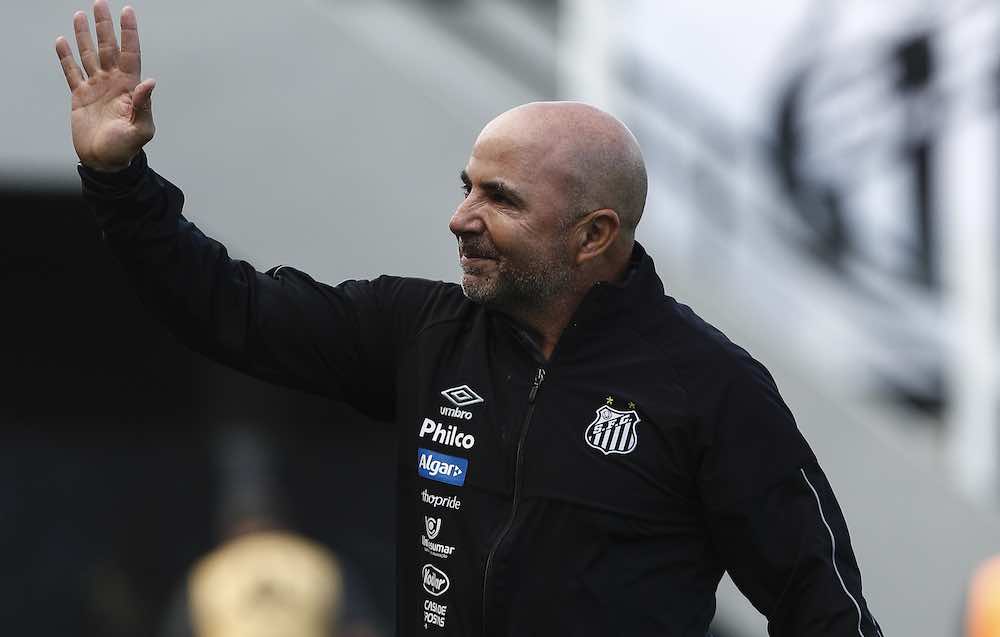 Several players impressed under Sampaoli. Yeferson Soteldo contributed to 14 league goals, scoring nine and setting up four for his teammates.

Left-back Jorge profited from being able to bomb forward, notching up a goal and four assists. He was very difficult for the opposition to deal with when attacking down the flank.

Lucas Verissimo was pivotal at the back which helped Santos to keep as many clean sheets as they did. His passing and interceptions were the strongest points of his game which were perfect for Sampaoli’s system. Eduardo Sasha’s finishing was top-notch, and his 15 goals made him the top scorer at the club. 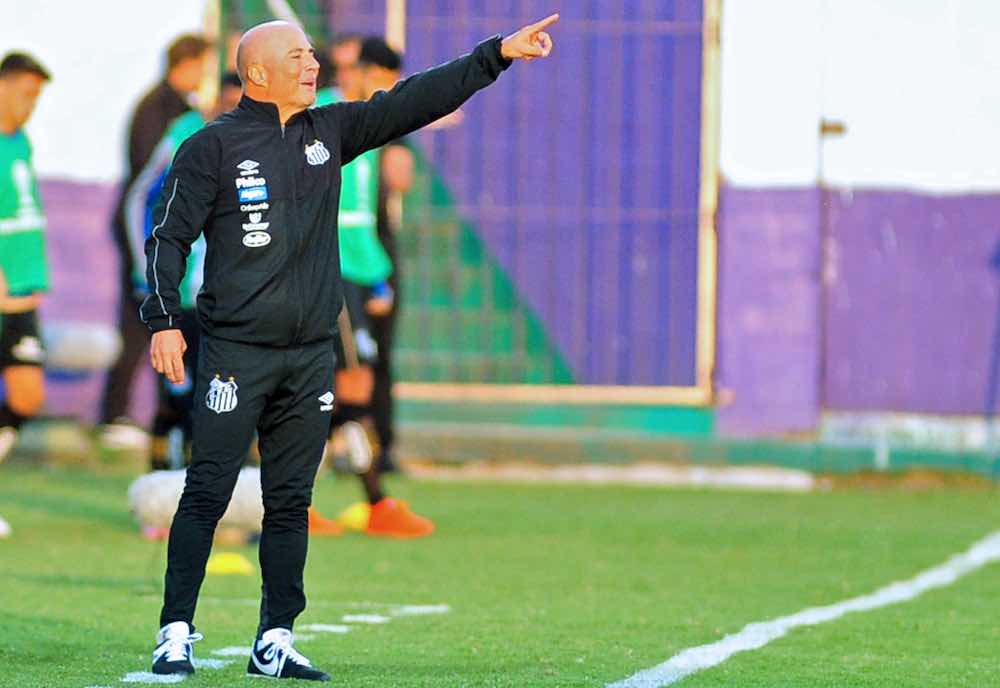 Many Leeds fans will be familiar with the 3-3-3-1 formation as Marcelo Bielsa has used it during his spell at the club on a few occasions and it was Bielsa who inspired Sampaoli to adopt such an approach which helped him become successful in Chile.

Every coach has negatives and for Sampaoli at Santos that would be the discipline of his side. Santos picked up 97 yellow cards and ten reds. This was the worst record in the league. This will be something which the Argentine might have to address at his next club, whoever that may be.

The failure to keep hold of Sampaoli could have a negative impact on the club next season, so it’s important they choose their next manager wisely especially now they have the Copa Libertadores to worry about.

Sampaoli has already been rumoured to be in talks with rivals Palmeiras. He has also been linked with the Arsenal job, and although the latter move doesn’t seem likely, it’s definitely worth keeping an eye on.