Emmanuel Adebayor joined Paraguayan club Olímpia this month and, upon his arrival, he was given a rockstar’s welcome at the Silvio Pettirossi International Airport in Asunción.

It’s safe to say Olimpia fans are highly excited about Togo International joining up with their beloved club.

“It is clearly the reflection of what Adebayor generates,” said a spokesperson for Olimpia fan page, @noti_Olimpia.

“Families, fans of all ages were present to welcome the Togolese star; also on a special date, which gave a nice touch.

“It means something immense, something which is not in the script.

“That a player with such a high profile and trajectory can wear the shirt of Olympia is a very positive symptom, not only for the institution but for Paraguayan football itself.”

Adebayor arrived in Asunción in the early hours this morning, but that didn’t stop the masses from turning out to greet him pic.twitter.com/afoJKQ2NsX

Another fan, Jose Lezcano, who is also on the Olimpia executive committee added:

“The signing of Adebayor is very important for our club. We believe that he can contribute to us a lot with his experience and the quality he has already shown in his career.

“There is no doubt that his contribution will be very important for us.

“With this signing, a new market opens for our club, putting Paraguay and, above all, our beloved Olimpia in the international eye which is part of what we seek for the future.”

Adebayor himself reacted to the wild reception by saying that he had never felt like that in his career — which is some feat considering the career he has had and the huge clubs he has played for.

The capture of Adebayor is a huge boost not just for Olimpia, but for Paraguayan football, which is slowly on the rise in South America.

This signing will increase the amount of attention on Paraguayan football not just in South America but worldwide. 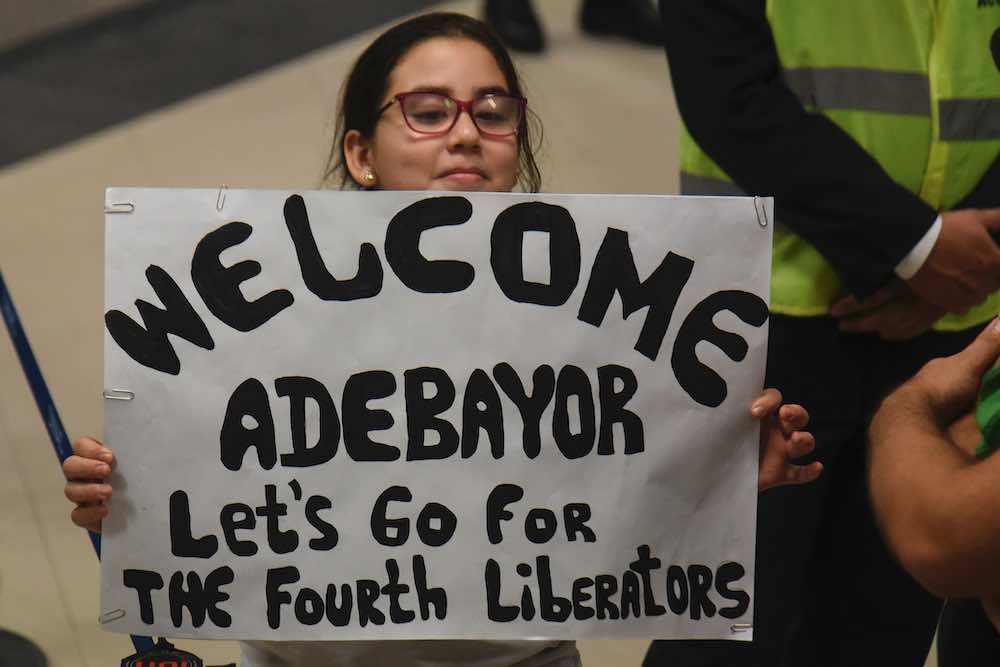 “The quality of that player he is, all the big clubs he has played for, will help to improve Olimpia and hopefully meet our expectations in the Copa Libertadores.

“I think he would fit very well, and he has his former partner in Roque, there are great expectations of the pair and [head coach Daniel] Garnero will know how to adapt it to his game”

The link-up with Santa Cruz is something all Olimpia fans are excited about. The pair previously played together at Manchester City in the Premier League, now will be looking to help Olimpia to Copa Libertadores glory for the first time since 2002.

“Roque is a positive influence for all Paraguayan sport,” added Lezcano. “He is an extraordinary ambassador, and for our club he is the emblem, the symbol, the role model.

“Roque can help Emmanuel a lot and if everything goes as expected, we believe that Adebayor will also help our captain achieve that goal so desired by all the fans of our club. We want to win everything we play and our captain is key in that.”
Adebayor has already had his first training session with the club, but it is unlikely he will feature in this weekend match against 12 de Octubre.

When could Adebayor make his debut for Olimpia?

His debut will likely come in Sunday’s Superclásico, the biggest game in Paraguayan football between Olimpia and city rivals Cerro Porteño.
The match is always a highly anticipated event, but now with a potential debut on the cards for Adebayor, the interest in the match is likely to skyrocket.
The 2018 Superclásico saw 14-year-old Fernando Ovelar score to become the youngest goalscorer in Paraguayan football.
In 2019, Roque Santa Cruz scored four goals in a 4-2 victory.
Adebayor 2020?
Features 1545 Olimpia 13 Paraguay 22 Emmanuel Adebayor 5

Loading...
Newer Post
Pablo Piatti Arrives At Toronto FC But What Can Fans expect?
Older Post
Could Riccardo Orsolini Make The Jump To Juventus And Italy In 2020?