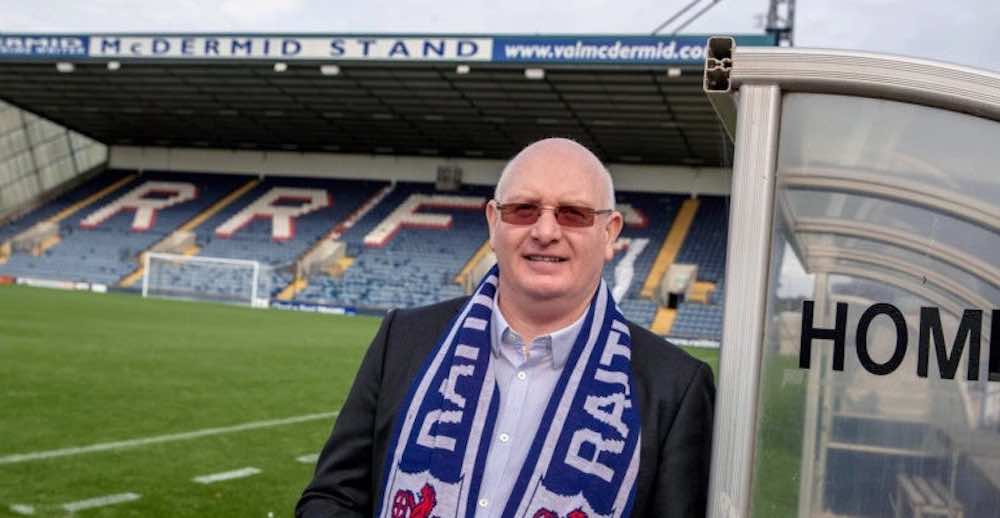 James Rowe spoke to Raith Rovers manager John McGlynn for WFi. They discussed his second spell at Raith Rovers, his playing career, managing Hearts, and his preferred style of football.

You are currently in your second spell as manager of Raith Rovers. How would you describe the club and what do you believe are the challenges of managing there?

“It is very similar from the first time I took over at Raith Rovers in November 2006. The club were then second from bottom of what is now named Scottish League One, and we went on to finish third that year and obtain a play-off position.

“When I returned to the club just over a year ago we were certainly not second from bottom and the expectation levels are still very high because Raith Rovers are one of the bigger clubs in League One. They look upon themselves as being a Scottish Championship club who often fight for promotion, and history will tell you that they often do.

“We currently find ourselves trying to get out of League One and into the Championship, with ambitions to reach the top of that league.

“This season we have built our own squad over previous transfer windows to try and win the Scottish League One, or get into the play-offs.

“We now have a hybrid situation where we have a mixture of full-time and part-time players. We are in a promising position to kick on as a football club.”

John McGlynn confirmed as Raith Rovers’ new manager. He leaves his job as a Celtic scout to return to Stark’s Park on contract until summer 2020.#SPFL @edinburghpaper @RaithRovers pic.twitter.com/cchE0pcL6I

You had a season managing Heart of Midlothian. How do you look back on managing a club such as Hearts and do you have any particular highlights?

“Yes you are correct in that I had seven months as manager. I left Hearts in 2006 to join Raith Rovers and I was at Raith Rovers until July 2012. Then after five and a half years at the club I went back to Hearts as manager.

“Previously I was at Hearts for eleven years as youth team coach, reserve coach, caretaker manager, you name it, I did it.

“I was not a successful player in that I did not play at a high level, but my plan was to go into coaching from youth level and then built up in order to gain a reputation.

“Upon my return to Hearts, as manager, they had a lot of financial problems with players not being paid, and that was ongoing for a couple of seasons. Things had reached an unsustainable level wehre they may go out of business, so it was maybe the wrong time to be at the club.

“But I still felt I did a good job in my brief of bringing through young players after losing many players who had won the Scottish Cup the previous season in order to cut the wage bill down, and to some extent we were successful.

“We reached the Scottish League Cup Final but unfortunately I did not last long enough to actually lead the team out in the cup final. We played a few big European matches against Liverpool, who at that particular time were managed by Brendan Rodgers.

“We lost 1-0 at home due to an own goal and we drew 1-1 at Anfield, and those games were big occasions with great atmospheres. To play against a team of Liverpool’s calibre were probably the biggest games that I have managed in terms of level. Luis Suarez scored late in the game to put Liverpool through.”

You mentioned that you did not play at a high level during your playing career. As far as I am aware you played for Berwick Rangers and you had a spell at the youth team at Bolton Wanderers. How do you look back on your playing career?

“When I was 14 I signed an S-form, which was a schoolboy form with Dundee United around about 1975. I got let go by Dundee United when I was 16 and I signed for Bolton Wanderers, playing in different youth teams and reserve teams, and I was there for 18 months.

“As I little boy all I wanted to do was become a professional footballer, and from that point of view I managed to succeed in that being my job.

“Unfortunately, it did not quite work out and I returned to Scotland to play part-time football with Berwick Rangers. Frank Connor was the manager and I spent three years at the club making more than 50 appearances. I managed to score a few goals too as a utility player playing in different positions, and because I was two-footed I would generally get put in a left-sided position.

“After my time at Berwick Rangers I went to what would be the equivalent of non-league football in Scotland with Whitehill Welfare, and after that I started coaching at the age of 26, at youth level and local teams level, and building up a reputation by doing well with these teams.

“Then in 1995 Jim Jefferies and Billy Brown at Hearts asked me to become their under 16s manager, then I moved on to coaching the under 18s team three years later.

“As I say, I then went on to stay at Hearts for 11 years in different coaching roles including assistant manager and caretaker manager of the first team. Only in November 2006 did I move on to Raith Rovers.”

Finally, John, you have accrued a lot of experience as a youth team coach and now a manager. How would you describe your coaching and managerial philosophy?

“I like to play good football and everyone has an opinion on what good football is. I like a passing game but not at a slow pace. I like it to be at a high tempo, and I like to press high and see the ball moving on the pitch.

“I love to see attacking options and players passing in different combinations on the edge of the box and putting crosses in.

“Obviously you have to have discipline within your team and you have to win games as a manager. It would be nice to win every game 5-4 but that is unrealistic. I believe that organization within a team is also very important, but all in all, I like nice and easy on the eye type of football.

“My teams always have to adapt in terms of attack and defence and I believe as a manager that you have to man manage well and delegate.”