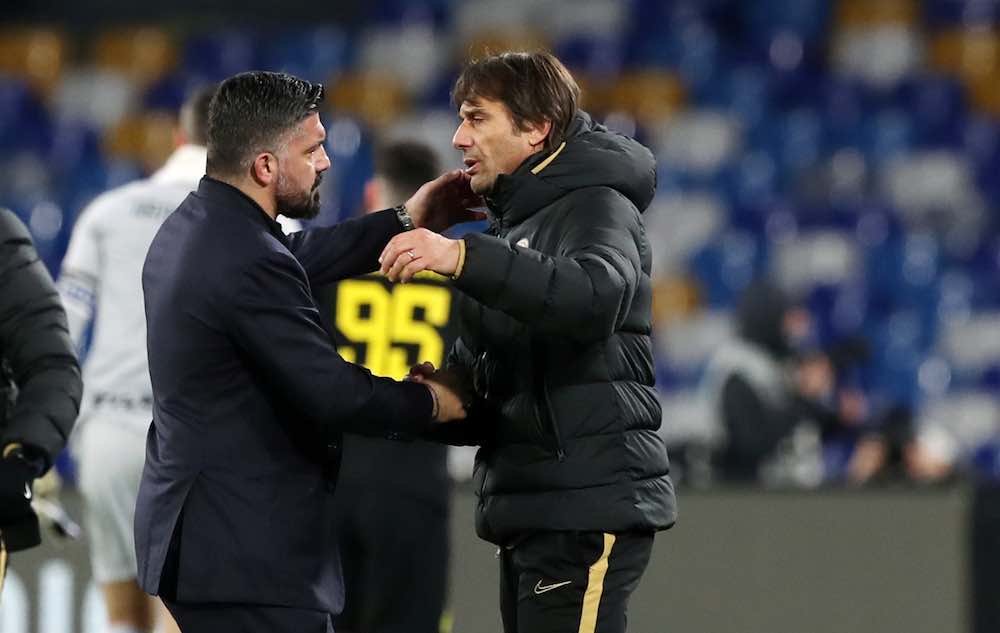 The Coppa Italia semi-finals commence on Wednesday with an intriguing match between 2013 champions Napoli and 2011 champions Inter.

Both sides will be playing having had just a short rest after competing in Serie A on Sunday.

Inter will be soaring after a dramatic 4-2 victory in yet another classic Derby della Madonnina. AC Milan, led by veteran striker Zlatan Ibrahimovic, dominated the first half, scoring twice before the break. The Nerazzurri stormed back, scoring four in the second half, capped by Romelu Lukaku’s 17th in the league.

In his post-match interview with Sky Sports, Inter manager Antonio Conte praised the mental fortitude of his players.

“Surely it was a special night, because in the first half I think we were in great difficulty maybe the most so far this season.

“There was a risk of getting overloaded, but we were good at re-balancing ourselves and understanding where we needed to improve, to have faith in what we had done.

“The credit goes to these guys, being able to resist the suffering means that you are preparing to grow and do something good.”

Napoli, on the other hand, will be looking to bounce back from a disappointing 3-2 loss to Lecce at the San Paolo.

A brace from Gianluca Lapadula and a stunning, long-range free-kick from Marco Mancosu were enough to hold off the Partenopei. Though Arkadiusz Milik and Jose Callejon netted in the second half, Napoli never recovered mentally from Lapadula’s first.

While Conte praised the mentality of his players, Napoli manager Gennaro Gattuso criticized that of his squad in his interview with Sky Sports.

“You can miss scoring chances, but the team is too fragile. Even if you don’t score, you must defend the 0-0 — we are too passive and not ruthless enough.

“We’ll review the match together, we’ll work on being compact, and by sniffing out danger. In the first minutes we had scoring chances, but once we faced pressure, we lost our confidence. This is our biggest problem. When we are attacked, we get scared.”

Both clubs will be looking to manage their squads ahead of the busiest period of the season.

Inter’s schedule is by far the more challenging of the two. Including the Coppa Italia, the Nerazzurri will play seven matches over a four-week period. To make matters worse, two of those matches are against Scudetto rivals Lazio (this coming Sunday) and Juventus (March 1).

Napoli will play six matches over that same period, but will come against much weaker opponents including struggling Brescia and Torino.

Daniele Padelli will start in goal for Inter while star keeper Samir Handanovic remains sidelined with a broken finger.

Stefano Sensi remains out with a calf injury. Though Alexis Sanchez is expected to start up top, Lautaro Martinez will be fresh after missing Inter’s last two league matches due to suspension.

Alex Meret may return after sitting on the weekend. Meret’s hand that was injured by a Lukaku strike in the last meeting of these two clubs. Kalidou Koulibaly and Nikola Maksimovic returned to the lineup on Sunday versus Lecce.

Gennaro Gattuso will be keen to win his first trophy in his relatively young coaching career. Meanwhile, Conte has won just about everywhere he’s gone, including three Scudetti and one Supercoppa with Juventus, and an English Premier League title and FA Cup with Chelsea.