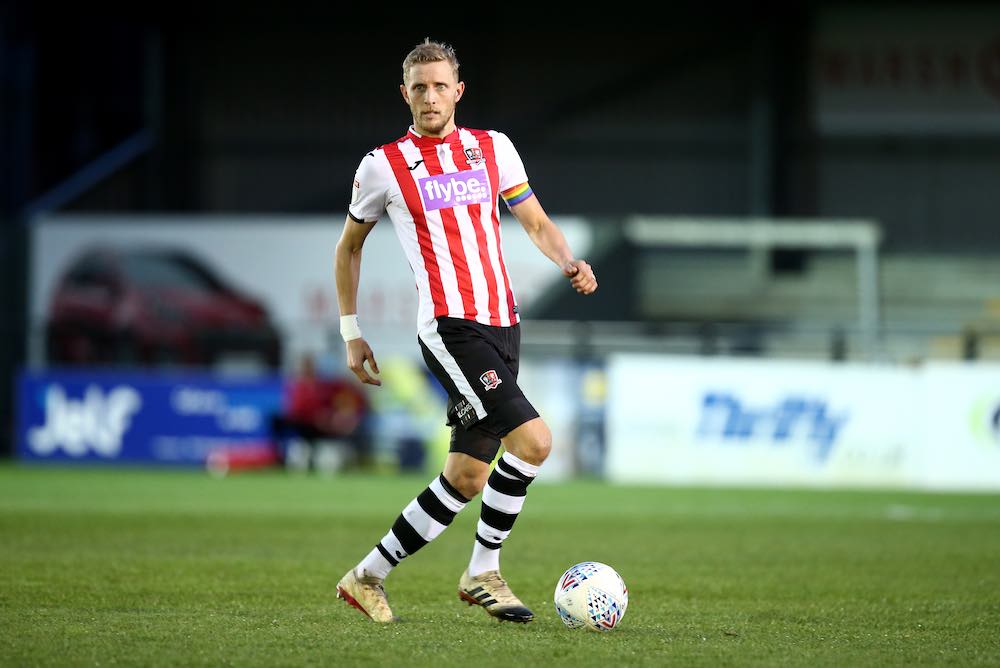 James Rowe spoke to Exeter City left-back Dean Moxey for WFi. They discussed his return to Exeter City as well as his time playing for Derby County and Crystal Palace, and coaches who have played a key role in his career.

You are currently in your second spell at Exeter City having signed for the club in 2017. You also came through the youth setup there. What does the club mean to you?

“Exeter City is my hometown club, and I am now back home around friends and family.

“We moved around the country and my partner and I have had three children of our own so it is nice for them to see their Dad playing for his hometown club.

“Exeter City is the club that gave me my chance as a young player, so the club means a lot to me.”

You played for Derby County between 2009 and 2011. How do you look back on your time there?

“I played for Derby County for two and a half seasons. In the January of my second season I was bought by Crystal Palace. It was a great experience to move away from home and grow as a person, living on my own and being independent.

“Coming from a small place and playing for Exeter City, then going to play in the Championship for Derby was brilliant for me. It made me grow up fast.

“It was a shame my time at Derby was cut short, but to go on to sign for Crystal Palace and do what I did there was everything that I could wish for.

“My highlight was just being able to sign for a club like Derby. It was a dream. I always wanted to play as high as I possibly could in my career, and to have a club such as Derby wanting to buy me was unbelievable, and something that I was proud of.

“I made my debut in the Championship against Peterborough United at Pride Park in a 3-2 win, and it was also a highlight for me to say that I had done it.”

You lead me nicely to my next question you mentioned going on to sign for Crystal Palace. How do you look back on your time at Selhurst Park and do you have any special highlights or memories of that period?

“I loved every second of my time at Crystal Palace. it was a shame when it had to come to an end. A new manager in Tony Pulis came in and had his own way, so it was time to move on.

“The three and a half years that I was there I loved every minute of it. I was suspended upon signing for the club and on my debut against Middlesbrough I got man of the match, which was nice for the fans to see, and a great way to start my time at the club.”

14 years ago today, this team (including a teenage Paul Jones and Dean Moxey) kept a clean sheet at Old Trafford, 9000 Grecians taking over Manchester… #ecfc pic.twitter.com/EZh9HXltb6

Having accrued a lot of experience in professional football, could you say who are among the best players you have played alongside so far?

“Yes, I have played with some fantastic players and people. When I went to Bolton Wanderers, although he was coming to the end of his career, you could still see the quality that Eiður Guðjohnsen had. He was class and a genuinely nice person too.

“Also the likes of Kevin Phillips at Crystal Palace was also another great player. Given what those two players have done in their career they have every right not to want to talk to a young player and help him out, but if you had a question for any of those two players they would answer it. They were brilliant in the way that they would try to help you in any way they can.

“Also during my time at Derby County, there are a lot of young players that I trained and played with who are still coming through and they have fantastic futures ahead of them.”

I can imagine in your position as a defender that you have come up against many good opponents through the years. Are there opponents that stand out for you?

“During my time in the Premier League, it was crazy to see players that I was coming up against and the ability that they had.

“You would watch them on TV and see the movement and how dangerous some players were. Just world-class players, and you had to be at your best to defend against them.

“I do not want to say individuals by name but you know by playing in the Premier League that you were up against world-class players every week.”

Finally, Dean, could you say who are the coaches and managers who have played a key role in your development as a professional footballer?

“Yes, to start with during my time at Exeter City, Eamonn Dolan was a massive part of my youth development, and he also gave me my chance in the first team at the age of 17. He was also a big part of my life and he knew me from eleven years old all the way up to the first team. It was also such a shame when he passed away a few years ago.

“All the managers that I have worked under have all been fantastic with me. Ian Holloway during the period that we were promoted to the Premier League. He is exactly what you see on TV and in his interviews and it is nice to see him back in the game now as manager of Grimsby Town.

“I must also mention Dougie Freeman he was the manager who signed me for Crystal Palace and he was brilliant with me and my whole family when I moved down to London from Derby.

“Former Exeter City manager Paul Tisdale brought me back home to the club and that was another big part of my career as well.”