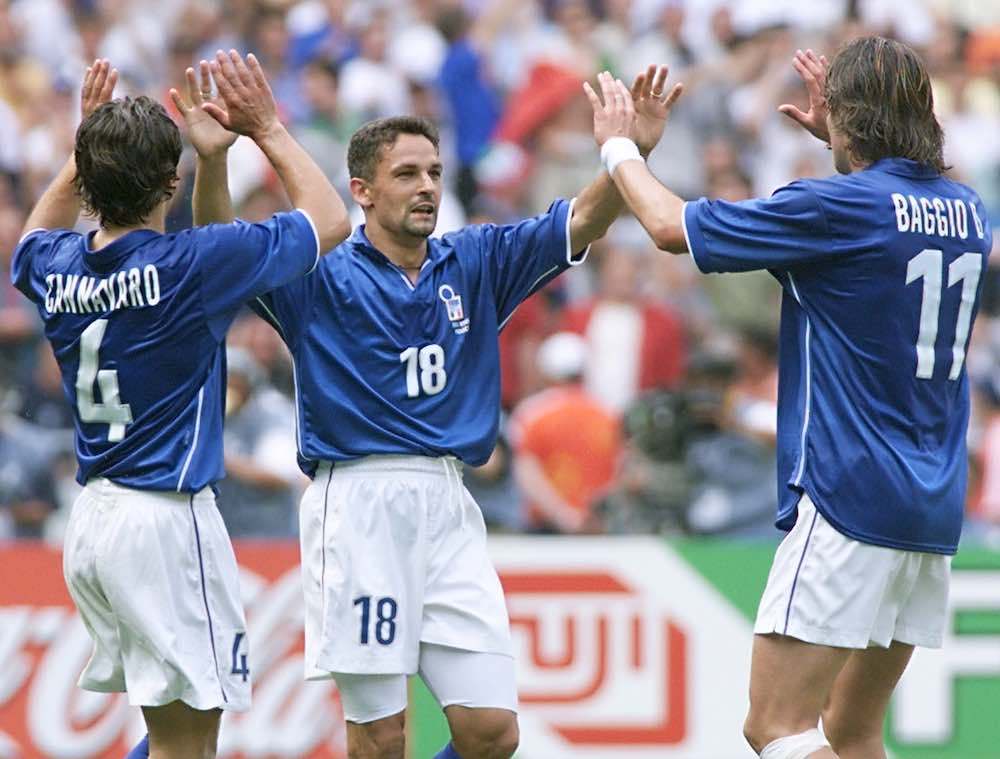 Many of the greatest football talents in the history of the game have donned the iconic Azzurri jersey of the Italy national team.

A long list of talent that has represented the nation, including legends such as Gianluigi Buffon, Dino Zoff, Paolo Maldini, Paolo Rossi, and Luigi Riva.

Buffon helped Italy to World Cup glory in 2006 and is currently Italy’s most capped player with 176 appearances.

Fellow goalkeeper, Zoff, was 40 when he captained Italy to their third World Cup in 1982, and was also the oldest player to ever win a World Cup.

Maldini, although he never won a major trophy with Italy, currently holds the records for most minutes played in World Cups with 2216, and Rossi was monumental during the Azzurri’s 1982 World Cup glory, won the Golden Boot in that tournament and was the leading goalscorer with six goals.

Riva is still Italy’s all-time top goal-scorer, tallying 35 goals in 42 games for his country and is still considered one of the greatest strikers of all time.

Although the legends mentioned above were all crucial to Italy’s success at various times, there are three other players that many believe to be even more influential to the success of Italian football: Roberto Baggio, Giuseppe Meazza, and Fabio Cannavaro.

Baggio did it all for Italy on the International level. The iconic ponytailed number 10 was one kick away from delivering World Cup glory for Italy in 1994. Unfortunately, that miss has gone down in history, but what many seem to forget is all the great things he has done for Italy.

Baggio is currently fourth on the list of Italy’s top goal-scorers with 27 goals in 56 appearances, tied for the most goals at the World Cup for Italy with nine, and is the only Italian to have scored in three different World Cups.

These records further prove how influential Baggio was for the Azzurri. He is regarded as one of the best players of his generation, but the one aspect of his career that will haunt him and many Azzurri fans is the fact that he was unable to capture that World Cup trophy.

Unlike Baggio, Meazza was able to deliver for Italy in two crucial tournaments. The centre-forward is one of only a couple of Italian players to have played in back to back World Cup winning teams, which he did in 1934 and 1938.

The Inter Milan idol captained Italy in 1938 on their road to World Cup glory in France. On top of two World Cup trophies, Meazza is also second on Italy’s top scorer list, having netted 33 goals in only 53 appearances.

Winning one World Cup is tough, winning two back to back World Cup’s is nearly unheard of, this goes to show just how dominant Meazza and Italy were throughout those two tournaments.

With a stadium now named after him, there is no denying that Meazza was extremely influential in the early years of Italian football.

There is one Italian defender who single-handedly dominated a World Cup tournament, and led his team by example to achieve World Cup glory, that man is Fabio Cannavaro.

The centre-back is still the second most capped Italian International with 136 appearances, only behind Buffon. Cannavaro also holds the record for most appearances in World Cup and World Cup qualifier matches for Italy with 50, is tied with Maldini for most World Cups played with four, and was Italy captain for eight years.

Although these are all great achievements, his greatest is undoubtedly captaining Italy to World Cup glory in 2006.

He was named to the 2006 World Cup All-Star team, winning the Silver Ball as the second-best player behind Zinedine Zidane, and but his performances throughout the tournament helped him win the FIFA World Player of the Year award and the Ballon d’Or in 2006.

Cannavaro is the only defender to have won the Ballon d’Or. One of the best defenders to ever play the game, Cannavaro will be remembered for decades for his passion, fearless defending and dominating performances throughout that tournament in Germany.

My own personal opinion — the player who helped me fall in love with calcio and the Azzurri was Fabio Cannavaro.

As a young football fan in the summer of 2006, watching him play each game in that World Cup tournament made me want to play exactly like him.

He led his back line and his team by example in every single game. Furthermore, his performance against Germany in the semi-finals really solidified his leadership and stellar tournament.

He was everywhere in that match, blocking shots, successfully completing one vs. one challenges, and putting his body on the line not only for his teammates, but for the whole nation. Winning the ball twice in the same sequence in overtime that eventually led to Italy’s second goal, was nothing short of incredible.

His tournament surely influenced the minds of many young football fans that summer.

It is impossible to pick just one or even a few Italian icons who have been more influential than others for the national team throughout the years.

One thing is for certain, though, the Azzurri would not have been crowned World Cup champions on four different occasions, or be as successful as they are today, without the impact of each player that has put on the iconic blue jersey.